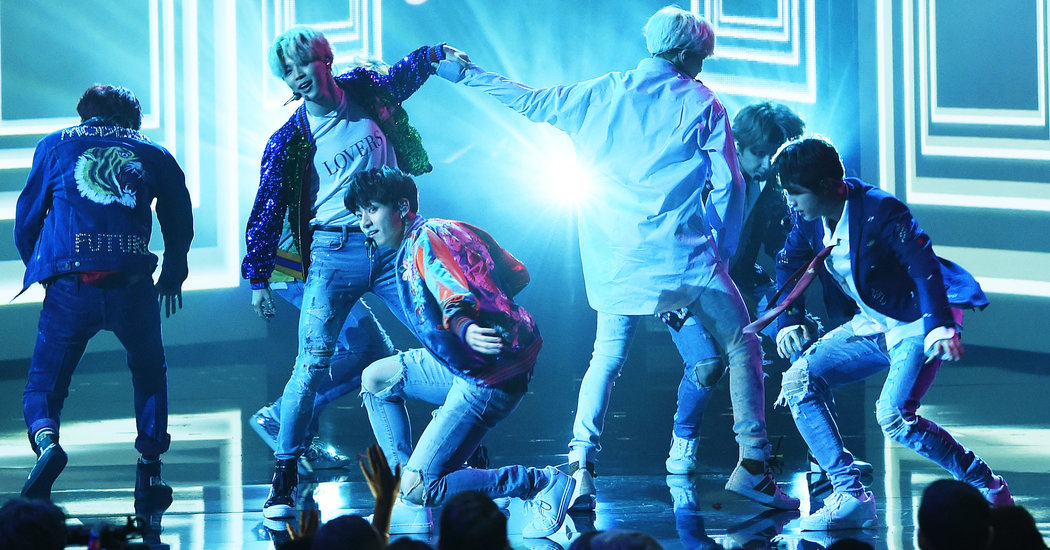 “Map of the Soul: 7” — the K-pop juggernaut BTS’s fourth Korean-language full-length album — just debuted at the top of the Billboard chart, though that’s only one indicator of the group’s still-growing global dominance.

In the past few years, BTS has become the worldwide standard-bearer for pure pop, a collection of seven members — J-Hope, RM, Suga, Jungkook, V, Jin and Jimin — who are charismatic, limber and, most crucially, game for the level of work and ambition required to be mega-popular at home, in the United States and almost everywhere in between.

BTS is soaring so high, it might not seem on the surface like it’s navigating particularly tricky waters. But the relentlessness of the group’s success obscures the fact that it’s on the cusp of two key transitions: a decreasing reliance on hip-hop and an increasing flirtation with high-profile English-language collaborators. “7” ends up as a kind of referendum on the sort of pop megalith BTS is becoming, and what it might have to leave behind on the way.

As a whole, the strong but not particularly unruly “7” is less sure-footed than “Love Yourself: Tear,” the group’s last full-length, from 2018, and the first K-pop album to debut atop the Billboard album chart. “Tear” showed BTS to be ambitious maximalists with an extremely wide comfort zone: pop-EDM, Southern hip-hop, 1990s R&B and the sort of pyrotechnic galactic thumpers that the genre privileges.

Having shown just how much it’s capable of, BTS narrows its focus here. On the one hand, the group is chameleonic — on “Boy With Luv,” it partners with Halsey for a saccharine neo-disco adventure; the squelchy “Make It Right” is written partly by Ed Sheeran and does an effective job of containing BTS’s exuberant energy in one of Sheeran’s signature neat packages. “Louder Than Bombs,” a slow, moody, almost gothic number and one of the album’s best songs, is written partly by Troye Sivan, Allie X and Leland.

The singing on the patient ballad “00:00 (Zero O’Clock)” — especially by Jungkook and Jimin — is impressive. And as usual, BTS’s rappers shine on “7.” “Interlude: Shadow,” performed by Suga, has strong eau de Drake, and the J-Hope track “Outro: Ego” pulses with chipper aerobic big-band energy. Perhaps the best song on the album is “Ugh!,” a barnstormer that features RM, J-Hope and Suga, and sounds like a collision of Outkast-era up-tempo mayhem with Travis Scott-era syllabic impressionism.

That fluency echoes what has become clear when BTS members have broken off for cross-border solo collaborations — say, RM on the “Seoul Town Road” remix of Lil Nas X’s “Old Town Road” or J-Hope’s update, with Becky G, of Webstar and Young B’s proto-viral 2006 hit “Chicken Noodle Soup” (with a remarkably exuberant video).

Not every song on “7” is effective, particularly the limpid “Moon” and the chaotic “On.” (Also, some of these songs were previously released on the 2019 EP “Map of the Soul: Persona.”) But in general, “7” captures a group sure of its place in the pop hierarchy and beginning to itch about what to do next — unsurprising, given that BTS is reaching the point of self-awareness that all superstars eventually reach, but can often be hidden in the hyperstylized world of K-pop.

To wit: On the group’s recent “Carpool Karaoke” segment, it ably handled hits by Post Malone and Bruno Mars, but there was also playful tension, especially with Jin lightly dragging James Corden, as well as his bandmate RM. We know where BTS came from and what it has become, but we’re only just beginning to see what it might splinter into.