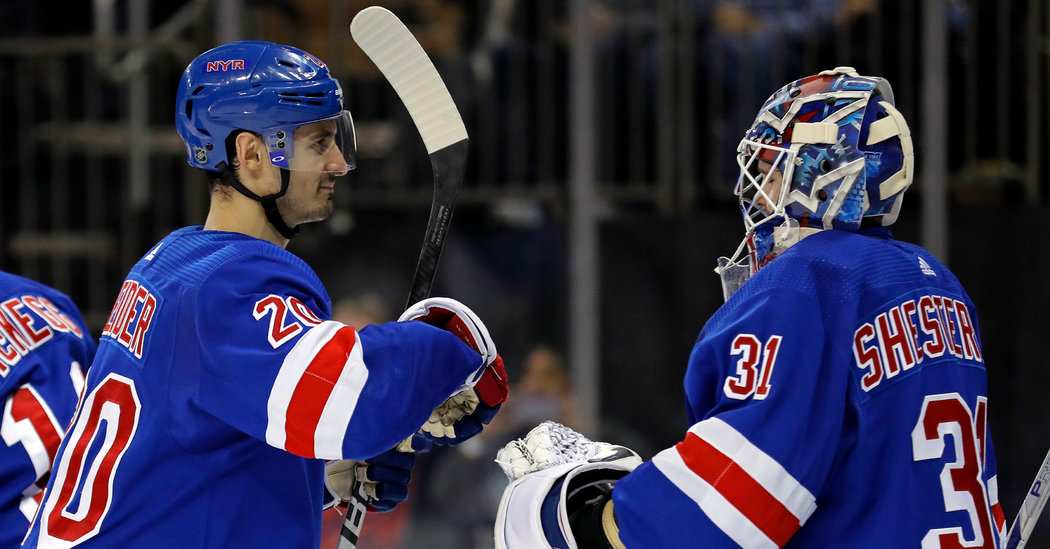 Last month’s streaks and injuries were overshadowed at month’s end by a hectic Feb. 24 trade deadline. There were more trades (32) moving the most players (55) than in any year since tracking started more than 40 years ago.

The Rangers surged before calamities struck, the Devils were sellers and the Islanders announced firm plans for their future home.

The Vegas Golden Knights were shrewd at the deadline, the Philadelphia Flyers shook up the Metropolitan Division and Alex Ovechkin crept closer to Wayne Gretzky’s scoring record. The trade activity may create considerable late-season movement in the standings, as teams make playoff pushes.

Rangers and Islanders See the Future

The Rangers had a busy end to February because of trades, a significant signing and a surge in the standings. The team won 11 games and catapulted into playoff consideration. Forward Chris Kreider, who had been the topic of much trade speculation, ended up agreeing to a seven-year, $45.5 million extension.

But a series of misfortunes deflated their hopes. Goalie Igor Shesterkin and forward Pavel Buchnevich were injured in a car crash on Feb. 23. Kreider broke his foot on Friday. Shesterkin, a revelation with his a .940 save percentage in 10 appearances, remains week-to-week with a broken rib. The injury put Henrik Lundqvist, who turned 38 on Monday, back between the pipes, where he has looked his age.

At the end of the month, seven teams were separated by seven points in the race for the final four playoff spots in the East. The Rangers continue to press toward a berth in the postseason without defenseman Brady Skjei, whom they traded to Carolina, which has one-point lead over them in the playoff race.

On the last day of the month, Gov. Andrew M. Cuomo announced that the Islanders would play at Nassau Coliseum in this spring’s playoffs — instead of at Barclays Center, where the team has played half its home games this season — and full time next season before an expected move to a new arena at Belmont Park for the 2021-22 season.

“I’m overjoyed,” added Cuomo, who grew up in Queens. “The Islanders should be in Long Island. When they moved to Brooklyn, I felt the air come out of the balloon. It was not right, not the way it was supposed to be.”

Already the top seed in the Pacific Division, the Vegas Golden Knights (36-23-8) added two pieces at the trade deadline that should extend their dominant run past February.

The team acquired Alec Martinez from the Kings, and the defenseman scored 6 points in five games after producing just 8 in 41 games in Los Angeles. The Golden Knights’ long search for a bankable backup to Marc-Andre Fleury finally came to a close, with the pickup of Islanders goalie Robin Lehner. However, Mark Stone, their top player, has a lower body injury and is out, his status considered week to week.

Philadelphia Shook Up the Metropolitan Division

The Flyers coalesced under the former Rangers coach Alain Vigneault, winning 10 games in February, more than Washington and Pittsburgh combined, and scoring 4.15 goals per game, the best offensive output in the N.H.L. over that stretch. They could not have clicked at a better time as division-leading Washington stumbled on the road midmonth and Pittsburgh lost five in a row to end the month, allowing Philadelphia to take over second.

Washington and Pittsburgh made moves for veterans chasing a first Stanley Cup. The Capitals brought in Ilya Kovalchuk, 36, who has a long friendship with his countryman Alex Ovechkin. The two have been enthusiastic about joining forces in Washington. After their first practice, Kovalchuk told reporters that they had dreamed of being N.H.L. teammates since adolescence.

After having his $6.25 million per year contract terminated by the Kings in December, Kovalchuk scored 9 points in his first 10 games after signing with Montreal for the league minimum. The Canadiens parlayed Kovalchuk for a third-round pick while agreeing to trade him to a Stanley Cup-contending team. In Washington, he will chase his first N.H.L. championship, adding depth to the Caps’ bottom six and power play.

The San Jose Sharks sent forward Patrick Marleau, 40, to the Penguins, cutting bait on a season that has been a disappointment after they reached the conference finals last year. (The Sharks also lost the two-time Norris winner Erik Karlsson, who broke his thumb, for the rest of the season.) Marleau spent most of his career in San Jose and, like Kovalchuk, has never won the Stanley Cup.

“You get that little extra jump in you and you’re playing to get that opportunity to get in the playoffs and go far,” Marleau said.

The Eighth One Inched Closer to the Great One

Ovechkin, 34, scored his 700th goal on Feb. 22 and finished the month with 701 goals. He became the eighth player in N.H.L. history to score 700 goals, with seventh place — Dale Hawerchuk’s total of 708 — firmly within his reach this season. But Ovechkin clearly has a bigger target in his sights: He sat 193 goals behind Wayne Gretzky’s career record at month’s end, and has been much more productive in his 30s than Gretzky was.

After the 700th, Gretzky congratulated Ovechkin and said he would do the same when Ovechkin reached 800 goals. Jaromir Jagr, whose 766 goals are the most for a European player, had an even bolder prognostication.

“If I would be Wayne Gretzky, I’d be shaking right now,” Jagr said. “Because I think you’re going to beat him.”