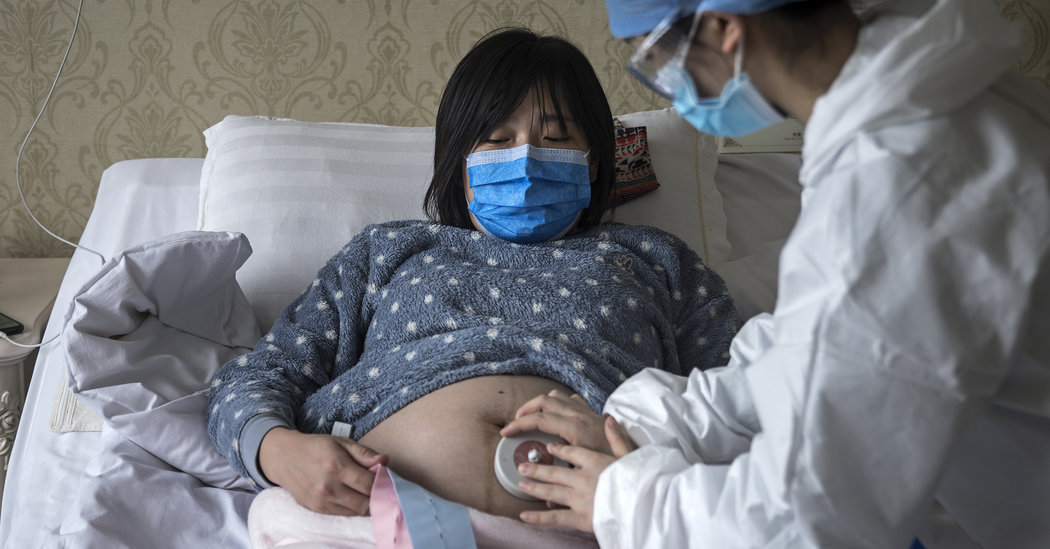 Pregnant women are often particularly susceptible to respiratory infections and, once infected, can become seriously ill, with long-lasting consequences for both mother and baby.

Is that true for the new coronavirus?

The information available so far is thin, but it appears that pregnant women are no more likely than anyone else to have severe symptoms from the coronavirus. In an analysis of 147 women, only 8 percent had severe disease and 1 percent were in critical condition, according to a report published Friday by the World Health Organization.

It is too soon to know the consequences for these women’s babies. But so far at least, infants born to women with an infection seemed free of the virus and appeared healthy at birth, according to a study of nine pregnant women and their babies published last month in The Lancet.

“Fortunately, there was no evidence of vertical transmission from mother to child,” said Dr. Wei Zhang, an epidemiologist at Northwestern University and one of the Lancet study’s authors.

But as Dr. Zhang himself noted, the study is small. And it does not offer any clues to the infection’s effect on women in earlier stages of pregnancy.

Fevers in early pregnancy are associated with birth defects and with some developmental conditions. And some viruses can have devastating consequences for the fetus. Zika, for example, can lead to an unusually small head, and Ebola can be lethal.

The 1918 and 1957 flu pandemics had death rates of between 30 and 50 percent among pregnant women. The trend in pregnant women infected with SARS, the closest relative of the new coronavirus, is no more reassuring: In one small study of 12 pregnant women in Hong Kong who developed SARS during the 2003 outbreak, three died, and four of the seven women who were in their first trimester had a spontaneous miscarriage.

The WHO’s statistics for the new coronavirus and Dr. Zhang’s study both offer reason for optimism, but data from bigger numbers is crucial, experts said.

“We do know that we’re going to have lots of pregnant women with coronavirus, just given the number of cases,” said Dr. Denise Jamieson, chair of gynecology and obstetrics at Emory University. “It’s going to be critical that surveillance systems collect information on pregnancy status.”

Dr. Jamieson is one of three experts who crafted the American College of Obstetricians and Gynecologists’ guidelines for treating pregnant women infected with the coronavirus. Among other best practices, the guidelines ask doctors’ offices to screen pregnant women even before their appointment — so that women with symptoms can wait in a separate area from other patients — and to take a detailed travel history.

For their part, pregnant women should take the same precautions as everyone else but let their doctors know immediately if they are experiencing any symptoms, Dr. Jamieson said.

Pregnant women might also want to obtain copies of their health records in advance, “so that if there is some disruption in services, they have a record of their prenatal care,” she said.

Dr. Jamieson was at the Centers for Disease Control and Prevention at the time of the 2009 H1N1 pandemic. About one in three pregnant women infected with that virus were hospitalized.

The C.D.C. recommended then that pregnant women who gave birth be separated from their infants until they were no longer infectious. The women were also encouraged to continue to express their breast milk but then discard it until they were illness-free, Dr. Jamieson said.

Similar measures may be necessary with the coronavirus, she said: “Separating moms and babies is obviously a difficult issue.”

The infected mothers in Dr. Zhang’s Lancet study were isolated from their infants. All nine women gave birth by cesarean section to minimize the newborns’ exposure to the virus. Dr. Zhang’s collaborators in Wuhan, the epicenter of the epidemic, tested cord blood, throat swabs from the infants, breast milk and amniotic fluid.

“We did not see any evidence for the virus,” Dr. Zhang said.

In other reports of infected babies, including a study of 10 newborns with serious complications, the infants were either tested hours after they were born or may have had direct contact with the infected mothers because the women were not diagnosed before delivery, Dr. Zhang said.

“If we have proper isolation and strict protocol, there should be good chance to have a healthy baby,” he said.

Dr. Zhang was careful to emphasize that his study offers “good news” only to women in late pregnancy. “We should be very careful not to mislead other group of pregnant women,” he said. “We don’t know the real effect of the virus on women in early pregnancy.”

If women in earlier stages of pregnancy do turn out to be at risk, they will be prime candidates for a vaccine. The first trial for a vaccine is expected to begin later this month, but its criteria exclude pregnant women.

Their exclusion is appropriate for this stage of vaccine development, said Dr. Ruth Karron, a vaccinologist at Johns Hopkins University and one of the co-leaders of the PREVENT guidance for including pregnant women in clinical trials.

For a vaccine to be offered to pregnant women, scientists must first balance the risks and benefits; in this case, she said, both are unknown. The researchers would need to know the nature and prevalence of the disease in pregnant women, as well as any potentially dangerous side effects from the vaccine, such as fever.