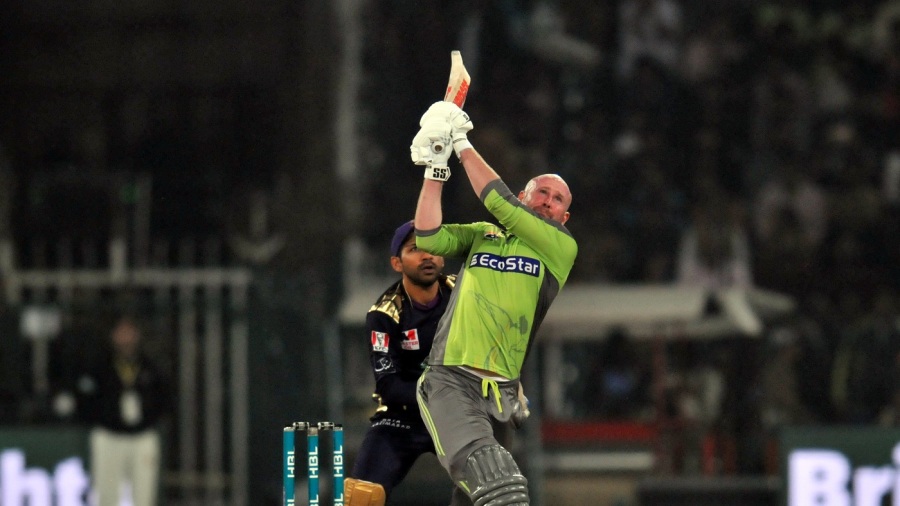 Well, don’t adjust your device or reach for thicker reading glasses, because what you’re about to read actually did happen.

Lahore Qalandars beat – no, walloped – defending champions Quetta Gladiators by 37 runs to storm to their first win of the tournament. It came thanks to a blitzkrieg of big hitting from Ben Dunk and Samit Patel, whose 155-run partnership saw Lahore surge to 209 after what appeared another disastrous start from the bottom-placed team.

A stunning 115 runs were added in the final seven overs, including 80 off four overs from the start of the 14th over as the wheels came off the Quetta bowling completely. Powerless in the face of the onslaught, they could only watch as Dunk broke the record for most sixes in a PSL innings, with 10 in his 43-ball 93, while Patel’s 41-ball 70 gave him stellar support from the other end.

Lahore bank heavily on Chris Lynn and Fakhar Zaman to get them off to a powerful start, but when that didn’t happen in a subdued Powerplay for the openers, things looked bleak for them. They became gloomier still when the two fell in quick succession, the worries compounded when Mohammad Hafeez was felled first ball by a reflex catch at first lip from Shane Watson. Going at barely above a run a ball in the first ten and little batting to follow Patel and Dunk, the English-Aussie duo took responsibility, and carried the innings through to the final over, the 155 they amassed the second highest partnership in the league’s history.

It stunned Quetta, who needed equally incongruous contributions from their key men, but when Jason Roy and Shane Watson fell relatively early, there was no coming back. Wickets fell in regular succession as Lahore simply let Quetta give away their wickets in the face of mounting pressure from the asking rate.

Sarfaraz Ahmed, Azam Khan, Mohammad Nawaz and Anwar Ali all fell that way as the bowlers cashed in, with Salman Irshad bagging career-best T20 figures of 4 for 29. He found more swing than usual with a remodelled action, and was responsible for putting paid for Azam Khan’s innings before it had really begun, as well as Ben Cutting’s resistance which threatened to bring the flickering game back to life briefly.

Cutting had been fighting what looked like an insurmountable battle all on his own. All he could do, however, was bring the margin of defeat down. No matter what damage he inflicted, it simply couldn’t compensate for the carnage that Lahore had wreaked in their final overs, and there was simply no recovering from it for Sarfaraz’s men.

The final seven overs in the first innings cost 19, 27, 14, 17, 10, 11 and 17. That, really, is the story of the match. Quetta had a firm grasp of the game at the 13-over mark, having inserted Lahore in to bat. Lynn, Fakhar and Hafeez were gone, and Lahore were 94 for 3, needing a big finish to remain competitive in the second innings. But the floodgates opened when Dunk smashed Anwar Ali for six off the second ball of the 14th, and were blown right off in the madness that followed.

Mohammad Nawaz was launched for four sixes off as many deliveries in the following over, and from thereon, it appeared the bowling side had run out of ideas. Mohammad Hasnain and Naseem Shah were put under pressure, conceding 10 and 12 respectively off the first two balls of their overs, and an unstoppable Dunk appeared able to hit sixes at will. Two more would come in the final over, and by the time Patel and Dunk holed out in the final over, Lahore had coasted past 200, and well past what Quetta would be able to hunt down.

In any normal game, Cutting lower down the order would have done enough to ensure he had taken his side over the line. But chasing 210 with all the usual suspects back in the pavilion, it was left to the Australian allrounder to help his side get over the line. He had managed it against Islamabad United last week, but an asking rate of 55 off five – the requirement that day – was a piece of pie when compared to the Herculean task that faced him today.

Soon after he walked out, Quetta required 94 off 36, and while Dunk had Patel for company, number nine Fawad Ahmed doesn’t quite have the Englishman’s batting prowess. This was an impossible task with two batsmen of your choice, but with Cutting forced to farm the strike and score nearly three a ball, it would inevitably be found wanting. That didn’t mean he didn’t provide entertainment along the way, smashing Shaheen Afridi and Mohammad Faizan for 27 in two overs as he brought up a half-century in 25 balls. Given it was Lahore at the other end, the feeling the game might not yet be done lingered for longer than it otherwise would have, but when the Australian holed out to cow corner in the 18th over, it was evident even Lahore couldn’t fluff this up.

Lahore post their first points on the board, though they’re still bottom of the table with two points in four games. Quetta slip one position to third behind Karachi Kings on net run rate, with three wins from six matches.