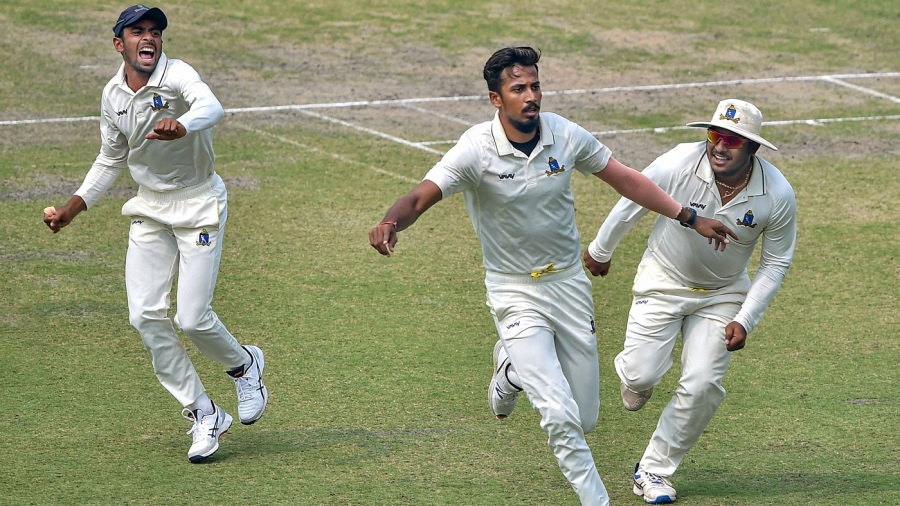 A small crowd sang chants for the hosts throughout the morning session at Eden Gardens as Bengal closed out Karnataka’s chase to qualify for their first Ranji Trophy final since the 2006-07 season.

Karnataka began the day 98 for 3 with overnight batsmen Devdutt Padikkal and Manish Pandey, needing 254 for a win, but fast bowler Mukesh Kumar erased any thoughts of a fight with a relentless attacking spell, picking up four wickets in five overs to expose Karnataka’s lower-order well inside an hour of play.

In a match where the opening hour has produced collapses every day, Karnataka would have hoped Pandey – their most experienced batsman – and Padikkal, who had made Karnataka’s only fifty of the match the evening before, could survive against pace attack that has barely given them any leeway all match. But into only third over of the day, Kumar set Pandey up with incoming deliveries before getting one to straighten from a corridor line and have him push for an outside edge to the keeper.

In this next over, he had KV Siddharth play a similar shot to have him caught in the slips and was on a hat-trick after trapping Sharath Srinivas right in front next ball. At six down, Karnataka’s hopes rested squarely on Padikkal and allrounder K Gowtham, but Kumar wasn’t done. He switched to around the wicket and had the left-handed Padikkal caught behind in much the same way he had done to Pandey earlier.

At 118 for 7, Karnataka made the decision to throw their bats around but the novelty of a few sweetly struck slogs wore thin as Bengal’s players roused the crowd as they came closer and closer to a historic win.

Ishan Porel accounted for Gowtham and in the seventh over of an uninterrupted nine-over spell, Kumar got Ronit More for his fifth wicket of the day. Karnataka lost their last seven wickets in 18 overs to crash out in the semi-final round for the third consecutive season. Kumar finished with his third five-wicket haul of the season, and career-best figures of 6-61.

It was a tame finish to the season for Karnataka, who were eyeing a treble after winning both limited-overs trophies before the Ranji Trophy, and were strongly placed after winning the toss and reducing Bengal to 67 for 6 on the first day. But Anustup Majumdar‘s unbeaten 149, which earned him Player of the match, rallied the lower order and helped Bengal to 312, an anomaly of a score on a challenging surface that neither team could even come close to for the rest of the game.