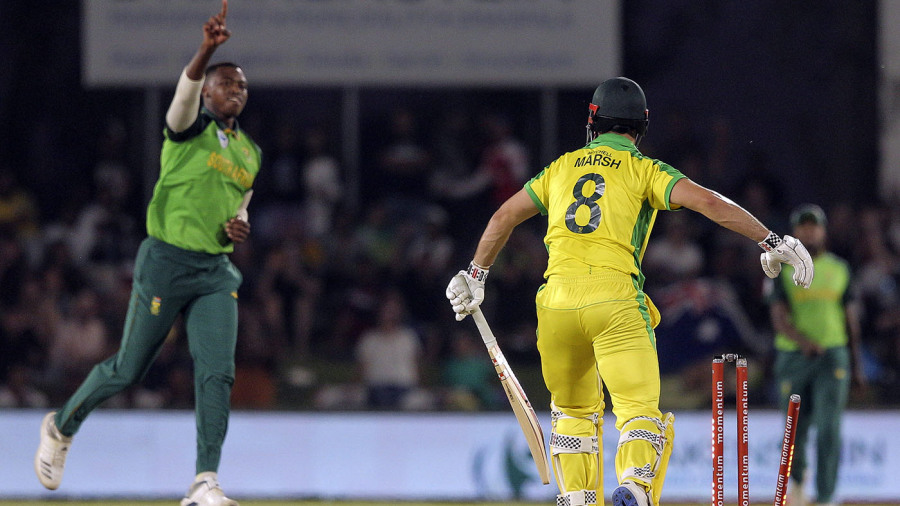 South Africa lead the series after a convincing 74-run win in Paarl, but it is the hosts who are under pressure, having found themselves in this position only to falter more than once during their home summer. The Proteas led Test, ODI and T20 series against England after the opening match but went on to lose all but one of their subsequent encounters (the ODIs finished 1-1 after the second was washed out and the visitors won the third). South Africa’s results have also been inconsistent against Australia, bouncing back from a mammoth 107-run defeat in their first T20I to win the second, only to suffer another heavy defeat in the last to concede the series.

There is, however, much for South Africa to be pleased about. A tight bowling performance led by Lungi Ngidi, Heinrich Klaasen‘s maiden ODI century, a second successive fifty in the format for David Miller and Kyle Verreynne’s 48 on debut suggest they are in decent shape with bat and ball. Quinton de Kock, who smashed 70 off 47 balls en route to victory in the second T20 against Australia, and Temba Bavuma, who returned from a brief injury layoff in the first ODI, add extra power meaning this South African side is full of promise.

Promise alone is not enough against an Australian side which is near full strength apart from the injured Glenn Maxwell though, and with the likes of David Warner, Steven Smith and Marnus Labuschagne to contend with, the task for South Africa to hold their nerve and prevail is considerable.

As South Africa’s premier allrounder, Andile Phehlukwayo‘s ability to close out a game comes into focus. While none of the home bowlers conceded more than six an over, he will be looking to improve on a return of 1 for 52 from his 10 overs. That comes off the back of his 1 for 47 from eight overs and none for 23 from two in two ODIs against England last month. He only played one of the three T20s against Australia, scoring 0 and taking one wicket.

Australia found themselves wanting in terms of another imposing partnership to pick up where Smith and Labuschagne left off after their 84-run stand for the third wicket in Paarl. Alex Carey can play a vital part as a middle-order bolster in both limited-overs formats. Carey has featured as an opener for the majority of his domestic T20 career, but moved down the order in the most recent edition of the Big Bash, a role he has become more familiar with in white-ball internationals over the past year. Carey has not reached a half-century in the four ODI innings he has played since scoring back-to-back fifties – against New Zealand and South Africa – at the World Cup in July and said he wished he was able to take his side’s batting deeper in the first match of this series. He has a chance to do so now.

South Africa could be forgiven for sticking with a winning side. Janneman Malan is expected to be fit after suffering a leg problem late in Australia’s innings during the last match and, while he did fall for a first-ball duck on debut, it would seem harsh to drop him on that basis. However, Jon-Jon Smuts provides an option as both an opener and extra spinner, should they choose to go that way.

The decision to combine Mitchell Marsh and D’Arcy Short as a fifth bowling option cost Australia 70 runs in the first match – they conceded 35 runs from five overs each – and may lead them to look towards Ashton Agar to reprise his role from the T20 series in which he was the leading wicket-taker from either side with eight at an average of 8.50 and economy rate of 5.66.

Forecasts predict hot, dry conditions and the pitch is typically slow. Expect to see plenty of twos and threes on this ground, which has the biggest outfield in the country, and has been used increasingly less for international cricket over the past decade.

“We’ll start this as a new game and a new start to the series, I think for us in order to play consistent cricket, it’s important that we start every new game like it’s the first game of the series to help us going towards winning series, back-to-back, as opposed to going one-nil and falling back towards the back end.”
Keshav Maharaj, South Africa spinner, on the importance of keeping momentum going this time

“It’s a great opportunity to see where this group’s at and I’ve no doubt that we’l respond really strongly.”
Alex Carey believes that Australia will strike back after losing the series opener