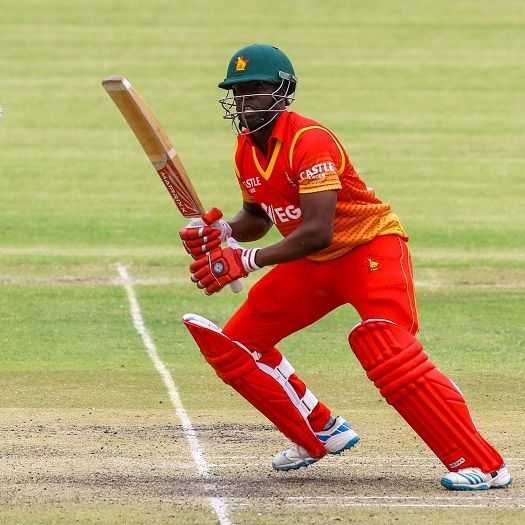 Much of the surprise around the Sylhet International Stadium upon seeing Donald Tiripano hammer five sixes and two fours was also felt in the Zimbabwe dressing room. Tiripano always had a reputation for being an able batsman down the order, but even Sean Williams, the stand-in captain for the day, did not think he had this kind of a big-hitting streak in him.

After slumping to 225 for 7 by the 42nd over, with their last recognised batsman Sikandar Raza gone, there was an air of inevitability about this contest. Bangladesh’s total of 322 for 8 seemed a bridge too far for Zimbabwe’s lower order to overcome, but Tiripano and Tinotenda Mutombodzi added 80 off the next 45 balls, bringing the game down to the final ball: Six needed off one.

Tiripano unforunately missed out, but his big-hitting exploits were for all to see. Over the years, he has built a name for himself as a stodgy lower-order batsman, often sent out as a nightwatchman. He averages around a hundred balls per Test, interestingly, and has many times been the difference between a poor Zimbabwe performance and a respectable one.

“Tiripano played a magnificent innings this evening,” Williams said. “He caught me off guard. I know he can bat. He has always been able to bat. I am glad that he has finally got to the half-century mark. If he had hit that ball for a six, I am pretty sure we would all be elated and jumping around, celebrating in the change room. It is a good thing for us. Losing by such a big margin in the previous game, and losing by four runs now; yes we lost but we have taken the first step in the way forward.”

Bangladesh’s captain Mashrafe Mortaza said that dew played a part in the pitch becoming easier for batsmen, something Williams himself acknowledged.

“When their score was around 140, Raza was at the crease, me and the bowlers were discussing that the ball was coming quite easily on to the bat,” Mortaza said. “There was dew so it was hard to grip the ball, and the bowlers couldn’t bowl to their strength. I think it really helps us for the future to win such tight games, to find out how we should react in these situations.

“Because the ball wasn’t gripping on the wicket, they were charging quite often against our spinners. I had to bring in Riyad into the attack but then Taijul came back strongly. They were playing the pacers quite well in the end so it was hard to bring back Mehidy towards the end.”

Williams said that the result reflected just how vastly different Zimbabwe’s performances had been over the two ODIs, but regretted that substantial partnerships came too late.

“I am very disappointed but these things happen in cricket,” he said. “Coming from the previous ODI, I think we have to hold our heads high. I think the batting was exceptional. If we can remove the partnerships from the bottom of the order to the top-order, I think we will have a better chance of winning.

“The guys showed a lot of fight and character. At one stage, we didn’t think we’d get close to their total but we got extremely close. I am extremely proud of them, and I am happy that they went. We have to be more disciplined and clinical with our bowling and fielding department.”

Williams also took solace from Wesley Madhevere’s early foray in the international game. The 19-year-old was impressive with the ball, and also held his own with the bat, hitting his maiden half-century.

“I don’t really like to look at the negatives in the game, but sometimes you have to be honest and truthful towards a player. Everybody is different and has their own personal feelings. I think our guys are growing up a little bit more. It is a very young side. I think there’s only two or three players close to a hundred ODIs.

“Brendan [Taylor] and myself have played more than a hundred and [Sikandar] Raza is on 99. The rest are not even close to 50. It is a good thing for me. I think it is extremely exciting to see someone like Wesley [Madhevere]. He is an extremely good find for Zimbabwe cricket. It is unbelievable the way, as a 19-year old, he has batted in the middle order.”