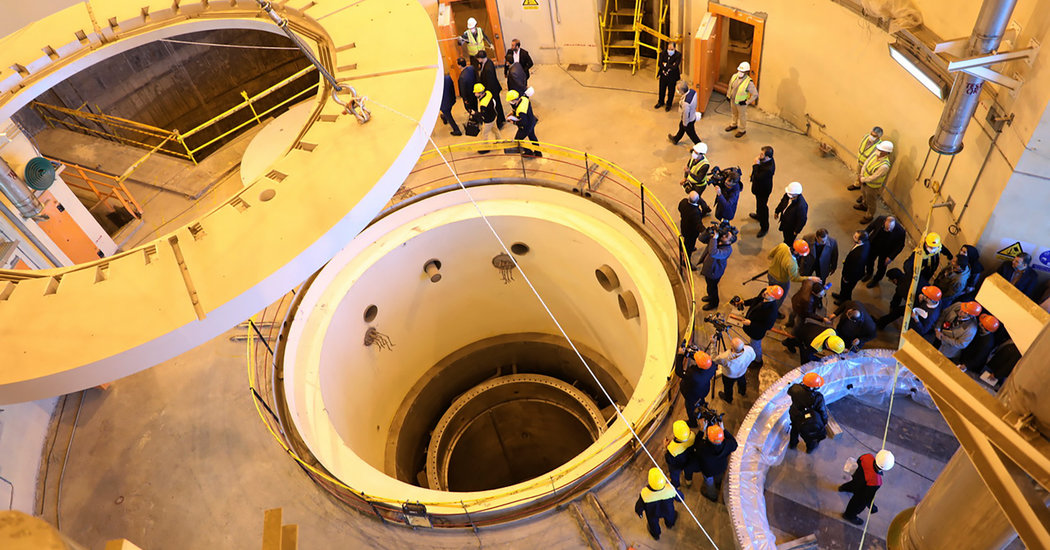 WASHINGTON — Iran’s growing stockpile of nuclear fuel recently crossed a critical threshold, according to a report issued Tuesday by international inspectors: For the first time since President Trump abandoned the 2015 nuclear deal, Tehran appears to have enough enriched uranium to produce a single nuclear weapon, though it would take months or years to manufacture a warhead and deliver it over long distances.

The International Atomic Energy Agency, which monitors nuclear capabilities and reports to the United Nations, also documented for the first time how Iran’s leadership blocked its inspectors from visiting three critical sites where there was evidence of past nuclear activity.

The agency’s newly appointed director, Rafael Mariano Grossi, an Argentine diplomat who has spent most of his life working on nuclear issues, said it was urgent for “Iran immediately to cooperate fully with the agency” by allowing it access to the sites, and to answer additional questions “related to possible undeclared nuclear material and nuclear-related activities.”

In response, Iran said it rejected the agency’s new rounds of questions because it had been cleared of responsibility to answer for its nuclear past. Iran, the report quoted Tehran as saying, “will not recognize any allegation on past activities and does not consider itself obliged to respond to such allegations.”

Taken together, the findings and the demand for more intrusive inspections take the standoff between Washington and Tehran into new territory.

Mr. Trump’s decision to abandon what he called a “terrible” deal has backfired for now. Iran has moved from complying with the accord’s strict limits on uranium production to beginning to rebuild its stockpile.

Iran’s leaders appear to have allowed the IAEA to document these violations, which are likely to drive home the fact that it is responding to Mr. Trump’s pressure campaign with one of its own.

“The situation is a paradox,” Mr. Grossi said in a recent interview in Washington, his first since taking over at the IAEA. “What we’re verifying is the gradual diminishing compliance with the agreement we’re supposed to be verifying.”

So far, experts note, the evidence suggests that Iran’s actions are incremental and calculated to pressure European governments and the Trump administration, rather than rushing for a bomb.

Mr. Trump and Secretary of State Mike Pompeo have insisted that, over time, the decision to abandon the deal and reimpose harsh sanctions — drastically cutting Iran’s oil revenues — would force the country to abandon all of its nuclear capabilities.

But the numbers suggest a different reality.

In 2016, Iran shipped out of the country 97 percent of its stockpile of uranium fuel, enough to make more than 14 weapons. It stayed well below the one-bomb threshold through most of 2019, confining itself to a stockpile of 300 kilograms, or 660 pounds.

But now, in its effort to pressure Europe to undermine the American economic sanctions, Iran is back in the fuel-making business.

The latest figures, contained in a confidential report to the agency’s 171 member states, show that for the first time since the nuclear accord went into effect, the country has surpassed 1,000 kilograms, or 2,200 pounds, of uranium fuel enriched up to 4.5 percent. If further enriched, to 90 percent, that is enough fuel to produce a single nuclear weapon, a step the Iranians insist they would never take.

The White House was silent on Tuesday about the findings.

Mr. Trump does not appear eager for further confrontation with Iran after the targeted killing in January of Maj. Gen. Qassim Suleimani, the senior commander of the Islamic Revolutionary Guards Corps, who died in an American drone strike in Iraq. The Guards Corps also oversaw the military aspects of Iran’s nuclear program, according to American, British and Israeli intelligence officials.

The IAEA measures fuel stockpiles and makes no projections about how close those take a nation to producing nuclear weapons.

Intelligence agencies and outside experts do so, and their reading of the report on Tuesday appeared clear: In the aftermath of Mr. Trump’s withdrawal from the Obama-era agreement, Iran now has a pathway to a bomb, and it is slowly reconstituting its fuel inventory.

Whether Iran decides to follow that path is unclear.

“Everything we are doing is reversible,” Mohammad Javad Zarif, Iran’s foreign minister, said at the Munich Security Conference last month. “We have always said we are not interested in building nuclear weapons.”

Some of the facilities the agency has demanded access to in Iran, mostly to conduct environmental tests that could reveal the presence of nuclear materials, came to the world’s attention in 2018 after Israeli agents stole a trove of historical materials about the Iranian nuclear program. Since then, Israel has doled out some of the findings to reporters, experts and the IAEA.

David Albright, the president of the Institute for Science and International Security, a nonprofit in Washington that tracks nuclear proliferation, said in an interview that if Iran did race for a bomb, it might need another three to four months to turn the newly revealed amount of uranium into the highly enriched material at the heart of a nuclear warhead.

“It’s worrisome,” he said. “We didn’t expect Iran to be at the 1,000-kilogram mark. I think people are a little surprised at the magnitude of the number. I’m sure it sent a shiver through the international community.”

Both the Obama and Trump administrations saw the Iran deal as keeping Tehran a year or more away from getting enough highly enriched uranium to fashion a single warhead —— what international inspectors call “a significant quantity.”

That amount is defined as 25 kilograms, or 55 pounds, of uranium highly enriched in the element’s rare 235 isotope — the atoms of which can split apart in powerful bursts of nuclear energy. A sphere of 55 pounds is said to be about the size of a small melon.

The main way to cut down the needed manufacturing time for a weapon is to raise the number and efficiency of the rows of whirling machines that concentrate the 235 isotope, which is one of two main bomb fuels.

The new report gave an example of restraint. Iran, it said, currently has 5,060 centrifuges installed underground at its Natanz plant — the number the 2015 nuclear deal allowed. In storage, it also has many other centrifuges that its technicians could in theory fit into the deep bunkers of the Natanz plant, in the Iranian desert.

But the report also noted an increase in the number of the whirling machines at a smaller plant known as Fordow, which is buried under a mountain and extremely difficult to destroy. It said that Iran had installed 1,057 centrifuges there, and that 1,044 are now enriching uranium.

Under the 2015 agreement, Iran could enrich no uranium whatsoever at Fordow and instead was to turn the plant into an international center for esoteric science experiments. The Iranians first put that plan on hold and returned Fordow to its former role as an enrichment plant for uranium.

A second report from the atomic inspectors used unusually sharp language to fault Iran’s lack of cooperation in addressing a number of nuclear riddles. Starting in July, the report said, the atomic inspectors had repeatedly raised three issues on whether Iran was complying with its obligations under its nuclear safeguards agreement — a standard accord that makes it part of the world’s peaceful nuclear club.

Having received no answers, the report said, the agency had now told Tehran of its “serious concern” with the lack of clarifications and access to the sites.