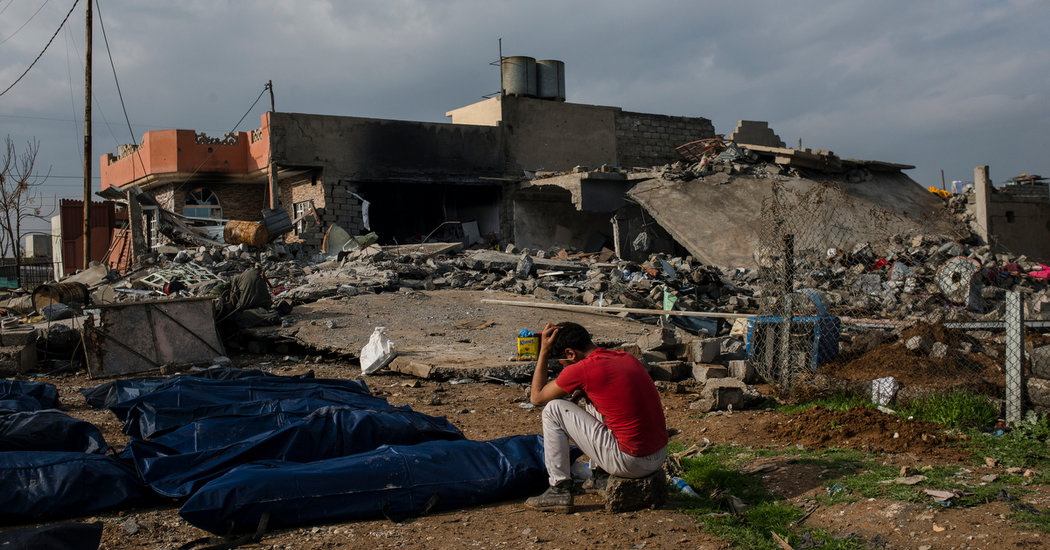 We heard the explosion, likely a car bomb. There were many that day. Thirty minutes later, three Humvees came barreling around the corner of nearby buildings with wounded civilians on their hoods and packed inside. They pulled up to our trauma-stabilization point, a makeshift medical unit in an abandoned home on the outer edge of Mosul, less than three miles from the front line. It was November 2016, and the operation to clear the city of ISIS fighters was fully underway. As we lifted the casualties onto stretchers, Pete, the lead medic of the team, shouted out their triage status: “Two red, three yellow, three green!” — meaning two critically wounded, three moderately injured and three walking wounded. One was a very small girl with a head wound that wouldn’t stop bleeding.

Our medical team treated each patient with the standard Tactical Combat Casualty Care method used in combat environments: stop the worst of the bleeding, make sure the patient’s airway is clear and blood is circulating and prevent hypothermia. Then we loaded the most grievously wounded into the first ambulance bound for a hospital in Erbil, at least three hours away by car, and it sped off in a cloud of dust.

[Sign up for the weekly At War newsletter to receive stories about duty, conflict and consequence.]

My heart sank when the ambulance returned minutes later. The back doors flung open and the Iraqi medics brought the stretcher down carrying the girl’s tiny, lifeless body wrapped in a blanket. Our translator broke down. He had a child the same age. Pete and I hugged. Then we turned off the tears and got back to work.

When I first arrived in Iraq a week earlier, I had no intention of going to Mosul. In addition to being a nurse, I’m a photojournalist. My original plan was to photograph women living in displaced-persons camps. But then I met Pete, an E.M.T. and a former United States Marine. For the past several months, he had been in Iraq running a mobile medical team founded by Slovak medics and made up of foreign volunteers. Most of the medical facilities operated by humanitarian aid organizations were located far from the fighting, too far to treat severely wounded trauma patients in time. Because civilian trauma care was not close by, and the Iraqi security forces’ mandate was to only treat military victims, Pete’s team made a deal: Bring us civilians, and we will boost your capacity to treat your own men. They agreed.

The members of the team were almost all former military — American, Slovak and Norwegian — gruff and full of bravado. I liked them. Pete initially responded to my first Facebook message with “Hey Alex,” followed by a week of radio silence. When we finally met, he and his colleague Derek asked me briefly about my medical background, and that was that. I figured I would stick around for a week or two and then head back to the States. I had no idea what I was getting myself into.

For the next eight months, we trailed Iraqi forces as they pushed deeper into the city. We set up makeshift aid stations in homes, schools and sometimes just on the side of the road. The fighting was relentless. Every time a neighborhood was liberated, we would be inundated with wounded soldiers and civilians; our busiest day brought us more than a hundred casualties. Between working in hospitals back home in Minnesota and the years I spent photographing the conflict in Yemen, I had been exposed to plenty of trauma, but nothing prepared me for a still-conscious young man whose brain matter was scattered across the stretcher or a teenage girl with four broken limbs and crushed pelvis delivered on a door frame, covered in glass. Almost worse than the physical wounds were the screams of anguish for lost parents and children.

Amid all of this horror, Pete and I grew close. Intense experiences lead to intense emotions. In him I saw a great leader with a big heart, one who was even more affected than I by the gore we witnessed every day. We became more than each other’s colleague and confidant. We fell in love quickly and deeply. Our sense of shared mission evolved, too. To treat more patients and run a more organized operation, we founded a new nonprofit, Global Response Management.

In June 2017, coalition forces began an assault to retake Mosul’s historic Old City. By that point, our team had treated thousands of people. Each death left me deflated, but I was able to compartmentalize my grief and move on. The adrenaline kept me focused. Then, on June 19, the war suddenly became more personal. That afternoon, we received four casualties, all journalists. Samuel Forey, a French reporter I had got to know, appeared on our doorstep first with shrapnel lodged in his face. He and the other journalists were struck by a roadside bomb while reporting from the Old City, on foot. He told us that the others were still pinned down by the fighting. “They’re trapped,” he said. “It’s bad.”

Samuel’s colleagues eventually arrived. And just as he warned, it was bad. There was Bakhtiyar Haddad, an Iraqi-Kurdish reporter and translator; Stephan Villeneuve, a French video journalist; and Véronique Robert, a Swiss journalist. All three were severely wounded. There was shrapnel in Bakhtiyar’s chest cavity that had entered under his armpit. Véronique’s lower limbs were shattered and she was bleeding from dozens of holes dotting her lower abdomen. Stephan, who managed to climb out of the Humvee ambulance on his own, had no face left at all.

I stabilized Véronique and then transported her to a group of coalition medics. “My blood type,” she said to me in the ambulance. “I’m B positive.” She departed Mosul in a helicopter. Later that month, I heard that she died at a hospital in France.

Mosul was declared liberated on July 10, 2017. In the months to come, Iraqi families would return to broken homes and broken lives, with little to no resources to deal with the trauma they experienced. Pete and I decided to take a trip to Sri Lanka to decompress. We returned to Iraq two weeks later for the battles of Tal Afar, Hawija and Qaim, and then left again for a vacation in Scotland. It was during that trip that I first started to realize that something was off. One day, Pete and I were walking around Edinburgh, and I was trying to tell him a story, but I couldn’t find the words. It was like my brain was tongue tied. I would draw a blank after every other word, unable to remember the names of places or people or everyday objects.

I remained in Iraq for several more months to report on the aftermath of the conflict. Our medical team disbanded when we couldn’t obtain funds to initiate a response in Syria, and many of my friends and colleagues left the country. By that point, it was clear that the war had taken a toll on my mental health. I grew increasingly antisocial and lost my creative drive. I felt unmotivated to accomplish anything except the simplest goals, like increasing the number of pull-ups I could do. But the therapists I consulted online all seemed to think I was coping just fine. “You don’t meet PTSD criteria,” I heard again and again.

Whatever was wrong with me, I knew I needed to make some dramatic changes. So I left Iraq. But I didn’t return home to Minnesota. Instead, Pete and I moved to rural Idaho. Having burned out on nursing and journalism, I got a job as a wild-land firefighter and spent the next five months swinging a Pulaski ax in the Sawtooth Mountains.

The work was cathartic, and it also gave me ample space and time to think. I thought a lot about the Iraqis who had died in our care, the ones we couldn’t save. There was no logic to the guilt — we were good at our jobs — but it plagued me nonetheless. The death I felt most acutely was Véronique’s. Maybe it was because I could see myself in her place: as a woman, as a journalist, as someone who had inserted herself into a war that wasn’t her own, who wanted to make a difference. The memory of her fading from consciousness in the back of the ambulance played on repeat in my mind. I drank often and usually alone. It was the only way I could cry.

Pete was experiencing it, too: the apathy, the anger, the high-functioning anxiety. We were comrades, in a sense. While our shared experiences at war added a degree of stress to our relationship — small disagreements often escalated into drunken screaming matches — we also understood each other better than anyone else. The war might have alienated us from the rest of the world, but it sealed us together.

Eventually, I made my way to a psychiatrist. Though therapy hadn’t done much for me in the past, our first session was a watershed moment for me. Nearly a year after leaving Mosul, I finally let my guard down and acknowledged the anger and grief that I had been trying so hard to compartmentalize. Over time, this helped me see that I didn’t need to carry the weight of things I could not change. With that revelation, I was able to start letting go of the past. As autumn came and the ground started to frost, I felt the opposite happening internally. The parts of me that had long been frozen — my drive, my imagination, my capacity to love — began to thaw. I have since returned to nursing and journalism, careers that require a great deal of compassion. That includes, I’ve learned, for myself.

Alex Kay Potter is a photojournalist, registered nurse and co-founder of Global Response Management. Her photo book about her experiences in Mosul, “The Jaw Still Speaking,” will be released in March.

Sign up for our newsletter to get the best of At War delivered to your inbox every week. For more coverage of conflict, visit nytimes.com/atwar.