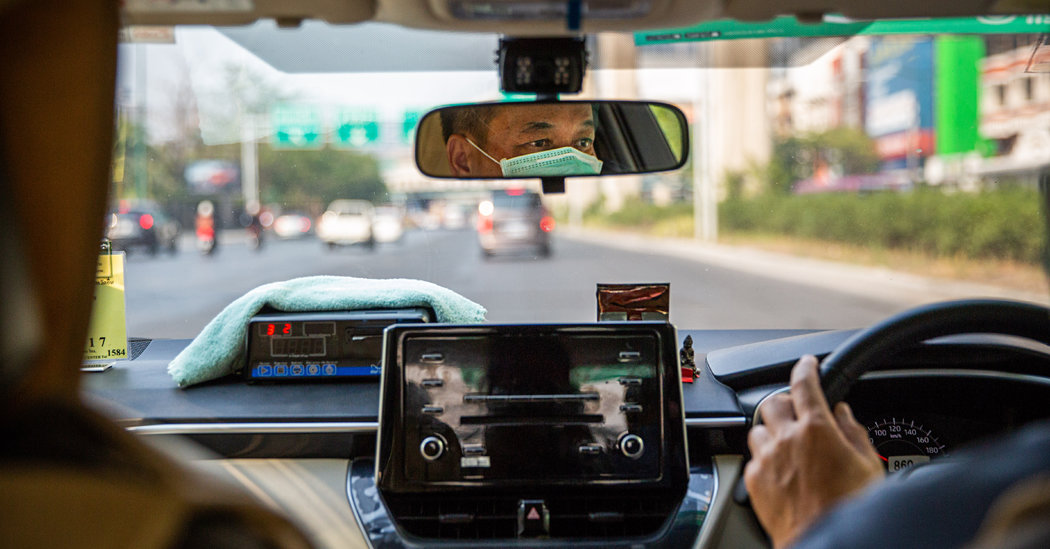 BANGKOK — The Chinese woman hailed the cab and said she wanted to go to the hospital.

The Thai taxi driver got stuck in traffic because that’s what often happens in Bangkok. To pass the time, the woman took out her phone and, leaning forward, pointed out some tourist sites she might want to visit.

Then she sneezed, the spray showering the cabby’s face.

“I thought, she’s pretty but she doesn’t have any manners,” said Thongsuk Thongrat, the taxi driver.

About a week later, Mr. Thongsuk, 50, tested positive for the coronavirus that has been spreading across the globe from China and has infected at least 41 people in Thailand.

His positive diagnosis highlights the risks posed to drivers and others who often come into contact with foreign visitors, even as the reduction in global travel has damaged economies dependent on tourism.

In Japan, a tour bus driver who had ferried visitors from Wuhan, the central Chinese city where the outbreak is believed to have originated, contracted the virus last month. The guide on the same bus came down with the virus as well.

Mr. Thongsuk, who has fully recovered from the virus after 14 days in an isolation unit at a Bangkok hospital, has now gone back to work, only to discover that there is not much work to be done. About 60 percent of his customers, he said, had been Chinese visitors, but they’re not coming anymore because of the lockdown in China and Beijing’s prohibitions on Chinese group tours exiting the country.

“Most of the Chinese I drove were nice,” he said. “I miss them.”

Many of Bangkok’s gilded Buddhist sites, once packed with tourists, are empty. Markets accustomed to selling tropical fruits and dried seafood to Chinese customers are hurting, too. Hotel occupancy has nosedived.

Mr. Thongsuk grew up in Thailand’s northeast, the country’s rice basket. He farmed until a drought withered his paddies and a friend returned from Bangkok with tales of money made driving foreigners to palaces, temples and go-go bars.

Later, he drove a fuel truck, which paid less money but offered a more stable income.

Five months ago, with tourism booming, Mr. Thongsuk decided to go back into the taxi business, sharing a green and yellow cab with a friend.

“I must have bad karma to have gotten sick so soon after I began driving again,” said Mr. Thongsuk, a Buddhist, like most Thais.

About 10 percent of Thailand’s gross domestic product derives from tourism, and Chinese people are by far the biggest group of visitors. Thailand is one of relatively few countries Chinese tourists can visit without a visa. More than one million visited Thailand last month, before the epidemic fully hit.

“I didn’t think to protect myself when I picked up tourists because I thought the government screened them before they came into the country,” Mr. Thongsuk said.

Most flights between Thailand and China have been canceled, although not all. And Thailand is now dealing with Thais bringing the virus home from trips abroad to countries where it is spreading. The Ministry of Public Health announced on Wednesday that a Thai man who had returned from Hokkaido, Japan’s northernmost island and a popular skiing destination, had contracted the virus, along with his wife.

Their 8-year-old grandson, who had not been to Japan, has also come down with the virus.

Because the man initially withheld information about his travels to Japan, 30 hospital workers in Bangkok who were exposed to him are now under quarantine themselves, the Ministry of Public Health said, burdening a medical system that could soon be fielding more cases.

Mr. Thongsuk said that as soon as he became ill, he made sure to wear a mask, despite not knowing that he had been infected with the coronavirus. In a culture where food is shared at the table and sometimes eaten by hand, Mr. Thongsuk ate his meals separately rather than risk infecting his family with what he thought was the flu, he said.

None of his relatives contracted the virus from him. Thailand’s public health minister, Anutin Charnvirakul, who checked in with Mr. Thongsuk twice in the hospital, praised him for his health habits.

On Wednesday, the health minister had a sterner message for Thais who took advantage of inexpensive flights offered by desperate regional airlines.

Having officially declared the coronavirus a dangerous communicable disease, Thailand is now ordering anyone who has visited what it considers a high-risk place — such as China, Japan, South Korea, Singapore or Italy — to undergo a 14-day quarantine.

“Even though tickets are cheap,” Mr. Anutin said, “it could be your last holiday.”