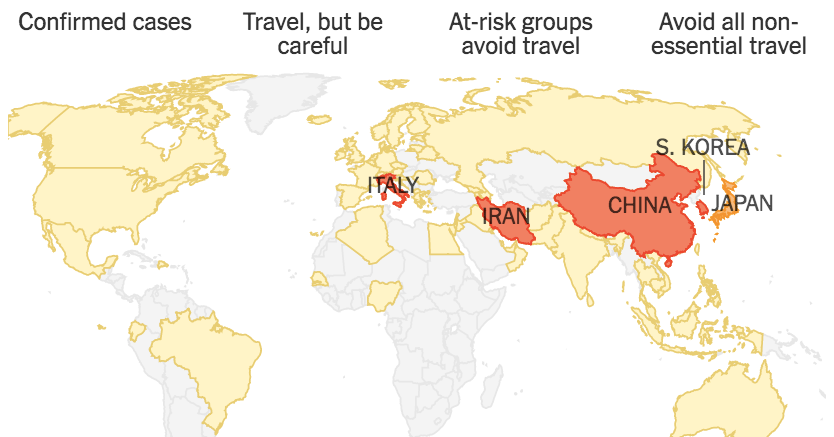 Welcome to the Coronavirus Briefing, a new newsletter from The New York Times. Sign up to get it by email here.

Every weekday, we’ll fill you in on the most important coronavirus developments, put it all in context, and point you to the most useful ways to be prepared.

In this inaugural edition, we’ll also catch you up on the story so far and the things you can do to help keep yourself and your community safe.

The virus is spreading across the U.S.

For weeks, as the virus spread in China and then beyond, U.S. officials kept a tight rein on screening: Only people who showed symptoms and had traveled to China or had a known exposure to another patient would be tested, and for the most part only by the Centers for Disease Control and Prevention.

That led to a low level of overall testing, and some epidemiologists suspected that the virus could be spreading undetected.

Those federal rules were relaxed over the weekend, and as testing expanded, new cases swiftly emerged in states including New York, Florida and Rhode Island — five cases on Saturday, 18 on Sunday, and 12 more on Monday. Some had no obvious source of infection. Officials expect more to follow.

“Community spread is going to be real,” said Gov. Andrew M. Cuomo of New York. “That is inevitable.”

At this writing, there have been a total of 100 cases in the United States, according to a database maintained by The New York Times. Six people have died. Here is a rundown of what we know about the American cases.

Globally, there have been just over 90,000 confirmed coronavirus cases so far; about 80,000 of them have been in China. About 3,000 people have died, a vast majority of them in China.

The Seattle region is an epicenter of illness and fear

A cluster of coronavirus cases in Kirkland, Wash., a suburb of Seattle, has thrown the region into turmoil. All six deaths in the U.S. so far have occurred in that area in the last few days.

The outbreak is centered on a nursing facility, Life Care Center of Kirkland, where eight residents and one employee have tested positive since Friday. Four residents have died, and many more are ill.

King County officials have been scrambling to cope with the outbreak. A quarter of Kirkland’s firefighters are in quarantine. A local college had to disinfect its campus because students had been to the nursing home. One school district canceled classes for Tuesday so that its staff could learn how to educate students remotely if the outbreak worsens.

A genetic analysis of two cases from Washington State found signs that the virus may have been circulating there unrecognized for as long as six weeks, suggesting that hundreds of people may be passing the virus along without knowing it.

Mike Baker, our Seattle-based correspondent covering the outbreak, said that wariness seemed to be everywhere on Monday. “I met with the state health officer, and she wouldn’t shake hands with me,” he said. “We bumped elbows instead.”

‘A catastrophe unfolding’ in Iran

An adviser to Iran’s supreme leader is among at least 66 people in the country who have died from the coronavirus, state media reported on Monday.

It was unclear whether the adviser, Mohammad Mirmohammadi, 71, had come into contact recently with the supreme leader, Ayatollah Ali Khamenei, 80. The government has confirmed at least 1,501 infections, but public health experts expressed concern that the official numbers were unreliable.

At least seven other prominent Iranian officials and five members of Parliament have also contracted the virus, including one who recently sat near President Hassan Rouhani at a cabinet meeting.

“There is a real sense of panic and anxiety,” says Farnaz Fassihi, a Times reporter who has been covering Iran. “People are barricading themselves in their homes. The feeling of uncertainty is exacerbated by the public’s lack of trust in the information provided by the government. From what we hear, it’s a catastrophe unfolding.”

Reduce the risk of infection

What parents need to know

Be ready for disruptions

What else we’re reading