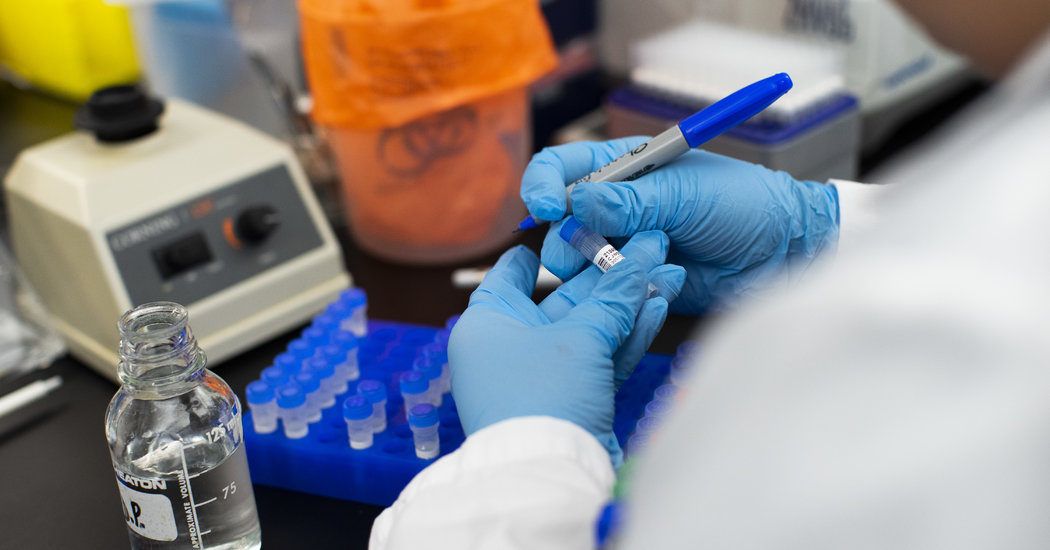 After weeks of stalled testing for the coronavirus, the United States now has enough diagnostic kits to test 75,000 people, with more on the way, Alex M. Azar II, the health and human services secretary, said on Sunday.

The Trump administration has faced widespread criticism for a slow and scattered delivery of testing materials to states, where only 12 labs are capable of diagnosing the virus.

Mr. Azar’s announcement, on CBS’s “Face the Nation,” came a day after the Food and Drug Administration announced that it was giving laboratories and hospitals across the country the go-ahead to conduct tests that had been severely limited to those analyzed by the Centers for Disease Control and Prevention.

That decision should improve the pace of detecting coronavirus infections and make it possible to more rapidly spot patterns of suspected or confirmed cases. That could be most immediately valuable on the West Coast, where several new cases of unknown origin were reported in recent days.

“We’re not going to find what we’re not looking for, so lifting the restrictions on diagnostic testing will put a lot of minds at ease,” said Haley Holmer, an epidemiologist who happens to have a child at an elementary school in Lake Oswego, Ore., that is closed because a school employee was found to have been infected by the coronavirus.

Mr. Azar said on Sunday that the diagnostic kits, which will be distributed within two weeks, represented “a radical expansion even beyond that of the testing that’s available.”

Vice President Mike Pence, named by President Trump last week to lead the administration’s response to a possible coronavirus outbreak in the United States, said on CNN’s “State of the Union” on Sunday that 15,000 testing kits were released over the weekend.

Federal health agencies, he said, were working with a “commercial provider” to distribute an additional 50,000 kits soon.

He defended the White House’s handling of the response to the coronavirus, saying he was “more confident than ever that we are bringing the whole-of-government approach.”

Dozens of labs — run by states, universities and private companies — have applied for emergency approval for tests. Once they have submitted evidence that those tests work, they will be able to use them immediately, even before the F.D.A. completes its review.

“This action today reflects our public health commitment to addressing critical public health needs and rapidly responding and adapting to this dynamic and evolving situation,” the agency’s commissioner, Stephen M. Hahn, said in a statement.

Public health experts and hospital officials across the country have expressed frustration in the last few weeks at the inability to test for possible coronavirus cases.

Until recently, the C.D.C. had insisted that only its test could be used on suspected cases, and only under limited circumstances — on people who had traveled to China within 14 days of developing symptoms or had contact with a known coronavirus case.

The C.D.C. decided not to adopt a test approved by the World Health Organization and instead forged ahead with its own test.

In early February, the agency said it had shipped about 200 test kits, capable of producing results on 700 to 800 samples, to states and had hoped to ship more kits to more than 30 countries. But in mid-February, the agency announced that the tests were flawed, and should not be used. Instead, it told state health departments to send all samples to the central C.D.C. lab in Atlanta. That resulted in several days’ delay in getting results.

The testing glitch appeared to have occurred in scaling up the manufacturing of test kits.

The kits had three components but some of the components were producing an inconclusive result for many public health labs using the test. On Thursday, the agency announced that labs with two of three working components could go ahead and use the C.D.C. tests, and it broadened the criteria for testing to include people who had traveled to countries with coronavirus infections in addition to China. But positive results still needed to be reconfirmed by the C.D.C. in Atlanta, and labs with only one working component could not conduct tests at all.

“Because of these limited resources, we could not get some of our patients tested,” said Dr. William Schaffner, an infectious disease specialist at Vanderbilt University Medical Center in Nashville.

Dr. Schaffner said he had a patient come in earlier this week who had developed symptoms of an upper respiratory infection after traveling to Italy, where a cluster of coronavirus infections has been observed. He referred the patient to the state laboratory, but officials there said she could not be tested because she did not meet the C.D.C. testing criteria at the time.

The testing limitations may have also prevented health officials from detecting cases earlier on in California, Oregon and Washington state, where people were found to have coronavirus infections despite having no history of travel to China or exposure to anyone with a confirmed infection. Those patients did not meet C.D.C.’s earlier criteria for testing. One person in Washington has since died of the coronavirus.

“If we had the ability to test earlier, I’m sure we would have identified patients earlier,” said Dr. Jeff Duchin, the health officer for public health in Seattle and King County, Wash., where the first death was reported on Saturday.

Both C.D.C. and the F.D.A. did have the option of adopting the test approved by the W.H.O., and public health experts said it was unclear why the agencies decided not to do so.

“In retrospect, it seems like a bad decision,” said one high-ranking C.D.C. official who requested anonymity and was not authorized to talk to the news media.

On Saturday, Mr. Trump, along with top health officials in his administration, continued to assert that the risk of the coronavirus to the American public was low. But some public health experts have suggested that cases may be going undetected in various places, given the number of American overseas travelers who may have returned home from countries that were just beginning to detect infections as the virus spread globally.

China and South Korea have been running thousands of tests per day and have even set up drive-through locations where people can get tested for the coronavirus without having to come in to hospitals, where they may infect other patients.

The C.D.C. has conducted less than 500 tests so far, while health officials in Britain had tested more than 10,400 people as of Saturday. and found 23 to have coronavirus infections.

“Our testing capacity has been lower than other countries,” said Caitlin Rivers, an epidemiologist at the Johns Hopkins Center for Health Security.

Dr. Scott Gottlieb, the former F.D.A. commissioner, predicted that by the end of the week, public health laboratories will be able to test 10,000 samples a day, with as much as an additional 10,000 a day from academic labs.

“This is what we need here,” said Dr. Gottlieb, who has been calling for expanded testing. “The key to preventing an epidemic in the U.S. is going to be much broader screening and early identification of cases while you can still isolate people and quarantine.”

New York City and New York state public health labs are among those that had submitted an application for emergency approval for testing. The C.D.C. test kit that New York City received had been more flawed than most, hampering officials’ ability to diagnose people quickly in the nation’s most populous city.

In California, during the early contacts that the United States had with those evacuees from China who were quarantined, a woman who was infected was mistakenly discharged from a San Diego hospital because of mislabeled samples sent to the C.D.C.

Allowing local labs to perform their own tests could reduce the chances of a similar glitch occurring again and reduce the burden on the C.D.C., Dr. Schaffner said.

Wider testing would likely increase the number of coronavirus cases reported in the United States in the near future and give health officials a better idea of the spread of disease, Dr. Schaffner said.

“We do not have widespread transmission at the moment,” he said. The pockets of community transmission are still limited to California, Oregon and Washington.

“If you’re living in Maine, your risk is still very low, as far as we know,” he said. “And some of that security in knowing that it’s not in my neighborhood, wherever that happens to be, will come with more widespread testing.”