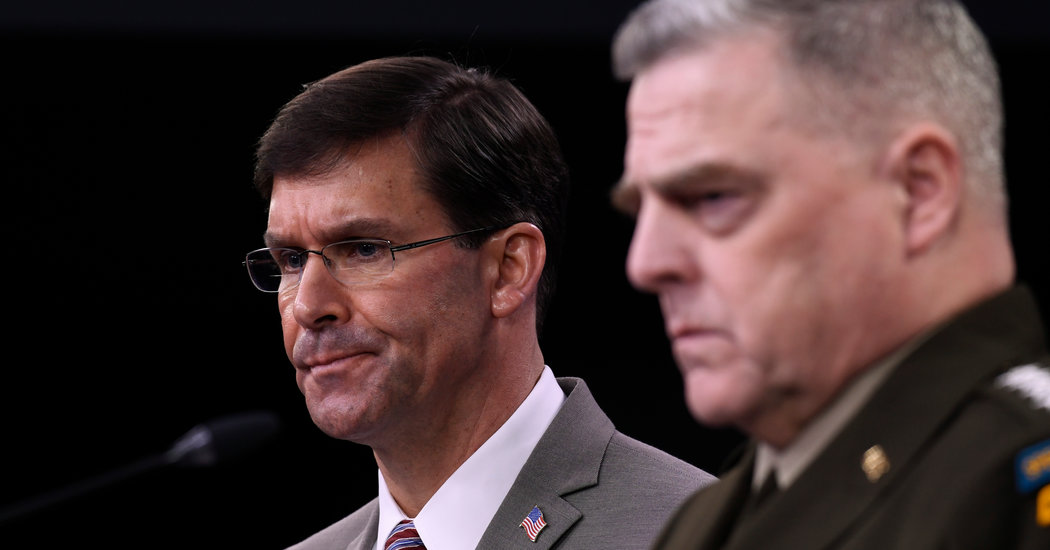 WASHINGTON — Defense Secretary Mark T. Esper said on Monday that the United States had begun withdrawing troops from Afghanistan, the first steps in what could be a complete exit from the country within the next 14 months.

Speaking to reporters at a Pentagon news conference, Mr. Esper said the initial troop drawdown — which would reduce the American presence in Afghanistan to 8,600 from the current 12,000 — was required to begin within 10 days of the peace agreement signed Saturday between the United States and the Taliban in Doha, Qatar.

“We are going to show good faith and begin withdrawing our troops,” Mr. Esper said.

The announcement came as the Taliban declared renewed attacks on Afghan forces. The bloodshed quickly dashed hopes of a prolonged cease-fire or a further reduction in violence after a weeklong drop in episodes across the country. The renewed violence spread fear among Afghans that the war would continue with little respite.

An Afghan commando was killed Monday by a Taliban sniper in Badghis Province in northwestern Afghanistan, according to Hasibullah Massoud, an Afghan army commander there. In Balkh Province in the north, the Taliban attacked several checkpoints in a three-hour-long gun battle. Three Afghan soldiers were wounded, said Mohammad Hakim, a local police commander. And in the east, a motorcycle rigged with explosives killed three civilians and wounded seven during a soccer match in Khost Province. Taliban officials denied responsibility for the attack in Khost.

Gen. Mark A. Milley, the chairman of the Joint Chiefs of Staff, joined Mr. Esper on Monday, saying it was unclear who was responsible for the bombing in Khost Province. The attack underscored once more the many difficulties of enforcing the peace agreement — and, at the least, understanding what was happening on the ground.

Under the agreement, the Taliban agreed not to attack United States or coalition troops in the country; but the insurgent group’s commitment to halting further attacks on Afghan troops was ambiguous at best. The Pentagon said it would review Taliban attacks on Afghan forces on a case-by-case basis and defend them if necessary.

With 8,600 troops in Afghanistan, the United States will maintain seven bases around the country and focus primarily on counterterrorism operations against Al Qaeda and the Islamic State. NATO and coalition forces will also scale back their presence by several thousand and continue to focus on training Afghan troops.

Mr. Esper said he expected that attacks on Afghan forces would “taper off” before the start of negotiations between the Taliban and Afghan officials on March 10.

Those so-called intra-Afghan talks, one of the main components of the peace agreement, are intended to end with some form of a power-sharing arrangement between the Kabul government and the Taliban. President Ashraf Ghani of Afghanistan said on Saturday that the negotiating team would be made up of all parts of Afghan society.

But those talks could already be delayed, as Mr. Ghani has refused to release up to 5,000 Taliban prisoners, a move that the recently signed agreement said would happen before the start of negotiations.

Further complicating the issue, the Taliban abducted dozens of people in Wardak Province over the weekend, according to local officials. Some of those abducted are related to Afghan government employees. The kidnappings were probably leverage for the upcoming talks, said Muhibullah Sharifzai, a spokesman for the Wardak provincial governor.