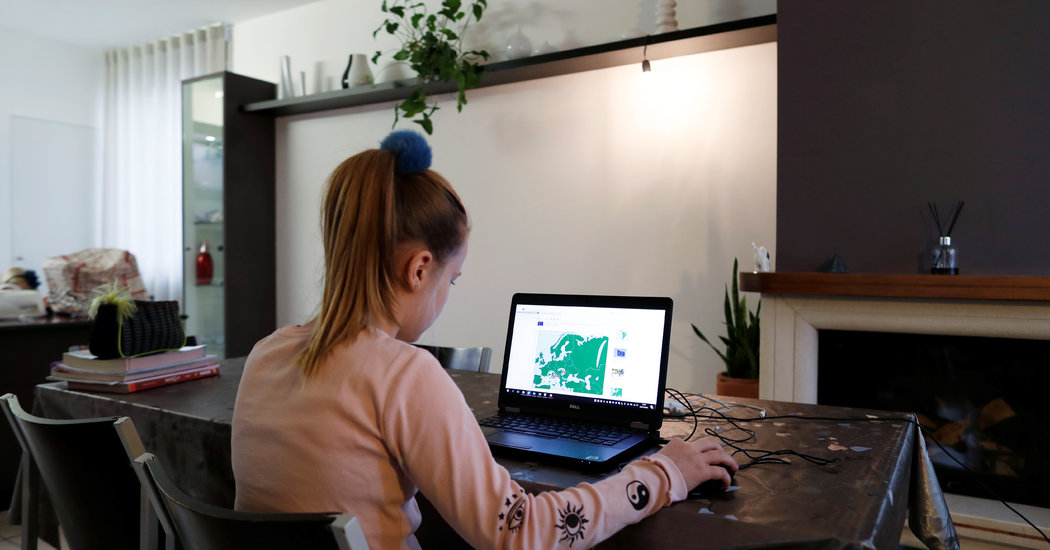 What should parents do if their teens and tweens, with easy access to information on their phones and laptops, develop anxiety over what they have heard about the coronavirus?

Here are tips from experts on how to help adolescents.

The psychologist Lisa Damour, author of “Under Pressure: Confronting the Epidemic of Stress and Anxiety in Girls,” said parents can help lessen their anxiety, and that of their kids, by learning all they can about the novel coronavirus and how to protect themselves.

“Reinforce basic stuff kids know and understand: Wash your hands, get a good night’s sleep, protect your immune system,” Dr. Damour said. “Tell your kids you know what to do to reduce the chances of getting sick.”

Other common-sense tips include trying to avoid touching your eyes, nose or mouth, all routes of viral transmission, and keeping your distance from people who are coughing.

It may be reassuring to some young people to learn that children seem to be less likely to get sick from the virus.

[Stay informed: Sign up for our Coronavirus Briefing newsletter | Be ready: How to Prepare for the Coronavirus]

Keep the Big Picture in Mind

Daniela Raccanello, an assistant professor of developmental and educational psychology at the University of Verona, Italy, found herself using some of her professional advice with her own 7- and 10-year-old daughters when their school in the Padua region closed last week because of coronavirus.

“It is key to help children continue their lives as normally as possible, but at the same time be aware of what is happening,” Dr. Raccanello said. “Keep them busy with their studies, and reassure them that the current situation, like their school being closed, is the best way to keep people safe.”

She is part of a group called Hemot, an international organization focusing on emotional preparedness for disasters, which published this pamphlet to help parents talk about coronavirus with their children. She said she used what she had learned from working on it to help ease her daughters’ fears that they or someone they know might get sick from the virus.

Fill in the Facts

Wendy Mogel, a clinical psychologist and the author of “Voice Lessons for Parents,” noted that the coronavirus has all the makings of a horror movie that will fascinate many older kids.

“The virus’s origin, the quick spread around the world, the allure of this novel disease is everywhere,” she said. “Turn off the news and really find out what your kids know about the virus.”

“Answer their questions, and if you don’t know the answer, be honest. You can research the answers together,” Dr. Mogel said.

[What scientists know about the virus]

Richard Bromfield, a psychologist at Harvard Medical School and the author of “How to Unspoil Your Child Fast,” agreed. “Kids are exposed to so much information today that they marinate in it,” he said. “Manage what your kids see and hear, but have them share with you what they are exposed to so you can discuss it. Try to see it the way they see it, and help correct misinformation and put it in context.”

Dr. Bromfield cautions that parents should not falsely reassure kids by saying things like “you’ll be fine” or “everyone’s going to be fine.” Instead, parents should try to understand what their children are feeling.

“Parents should have one leg in the worry and one leg in the place of constructive help, comfort and validation of how hard it is to be experiencing this,” Dr. Bromfield said.

He compared it to other recent catastrophes that have been in the news, such as the bush fires in Australia.

“For parents it is easy to imagine a 3- or 4-year-old crying when they see a koala bear burned and alone,” he said. “I think we forget that a 17-year-old still has a little bit of that younger child in them, and they too are frightened and vulnerable.”

Make It a Team Effort

She added, “It’s also a good opportunity for parents to reinforce what they have always told their kids: Get a good night’s sleep, get some sunshine, eat well and make sure you wash your hands.”

Give teens the right information about how viruses are transmitted and put it in context, suggested Heather Turgeon, a psychotherapist and co-author of “Now Say This: The Right Words to Solve Every Parenting Dilemma.”

“Explain that part of why we take certain precautions, like 20-second hand-washing before snacks and lunch, not sharing food and utensils, and so forth is that we’re protecting vulnerable people. It’s a community effort,” Ms. Turgeon said.

If your own emergency preparation plans include stocking up on groceries and toiletries, as you would before a big snowstorm or hurricane, you might invite your kids to go the store with you. Having a stash of their favorite snacks in the pantry could help them feel prepared.

[Advice from NYT Parenting on talking about the virus with preschoolers]

With spring break on the horizon for many schoolchildren, Dr. Damour said that if families do decide to cancel trips, it’s good to be completely upfront about it.

“Tell your kids that this year, the risk of traveling isn’t worth it, but you will find another way for your family to have fun,” Dr. Damour said.

[Should you cancel spring break plans? Advice from NYT Parenting]

“Rather than just react, parents should reflect, think and plan to talk to their child with thoughtfulness, carefulness and steadfastness,” Dr. Bromfield said. “That helps your child and you navigate this particular moment and serve as a template, as a way to approach the next one. The implication is that your child will be able to do that in the future on his or her own.”