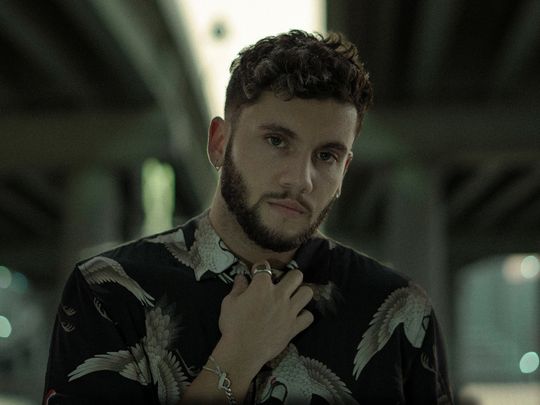 Jaymie Deville has come a long way from the X Factor Australia finals in 2014.

Living in Dubai for the past five years, the 26-year-old artist has just released his first EP, ‘True Love’. It’s a sensitive affair that melts like butter and points towards an evolving singer-songwriter, inspired by the early stages of adulthood.

“I came out of a sort of toxic, destructive relationship and moved into pursuing music full-time,” Deville told tabloid. “I’m the type of writer who writes about how I feel and about my surroundings — I can only pull from so far away from myself to create something, to have the listener feel like they’re in the room with me.”

There’s a reason the 5-track album sounds so languid and unhurried: Deville spent three years writing these songs, between 2015 and 2018.

He collaborated with UAE-based producer Rayan Bailouni. The two came up with a sound that would set Deville apart, including little touches, from putting bird noises in Early Morning to choosing a drum style for ‘True Love’ that steered clear of “that electronic, overdone sound.”

“I’m showing the softer side of me, basically, for the first part [of this project],” said Deville.

X FACTOR: ‘A TON OF MANIPULATION’

Looking back on his stint on X Factor Australia, Deville recalls some mind-boggling moments.

“I didn’t feel like I was that young at the time, but I was 21 — I was a little bit naive, I didn’t really know too much about the industry,” he explained.

“Everything that you see on TV is what they want you to see. Behind the scenes, there is a ton of manipulation that happens. A lot of fellow artists say the same thing. You almost feel like you know which way your fate is going to be decided for you,” he added.

“It’s very obvious. Maybe they’ll say that something’s happened to your guitar, something’s broken, or that there is an issue with the sound, when you’re just about to go on TV. And you’re like, ‘You guys are a million dollar company with so many resources and a state of the art facility, and you say that the batteries on my guitar are running out? Change the batteries!’”

Deville seems to shrug it off now, adding, “They’ll choose a song for you and then they’ll say it was a bad song choice. That’s the kind of stupid-slash-funny side about it. But, that’s TV and it’s as expected. That was probably the most fascinating part to me.

“To keep a positive, I think the experience of going to New York was really cool — I got to sing in front of JLo.”

The biggest lesson Deville has learnt since then: there are no shortcuts in this world.

“Everyone who is at the top, at some point, they’ve put in the work beforehand,” said Deville. “I’m in this for the long run. So I’m not too fussed about the ‘now’, I’m more focused on five years [time] and the bigger plan.”

Deville, who grew up in a musical household, remembers being as young as two years old and waking up to his father listening to blues music, from BB King to Howlin’ Wolf.

By the time he was eight, his mother had remarried a musician. Deville would watch his stepfather perform in Itchy Fingers, a rockabilly band based in Melbourne.

“I learnt the guitar and it just went from there. It was almost like it was bound to happen, sooner or later,” said Deville.

When he first arrived in Dubai half a decade ago, Deville found it difficult to find an R’n’B night to frequent, or something with “a bit of culture to it.” Things are different now.

“Dubai is definitely on the come up. I think [music coming out of here is] going to be super relatable — it will be worldwide,” he said.

And with ‘True Love’ out now on all major platforms, Deville already has an eye on the future.

“I don’t know how much I should say, but there’s another body of work coming very soon, straight after this one,” said Deville. “And I would just say: I don’t want people to think that I’m gonna do the same thing twice.”

WHERE TO WATCH JAYMIE PERFORM

Mondays at Nobu in Atlantis Hotel for their ladies night, 8pm.