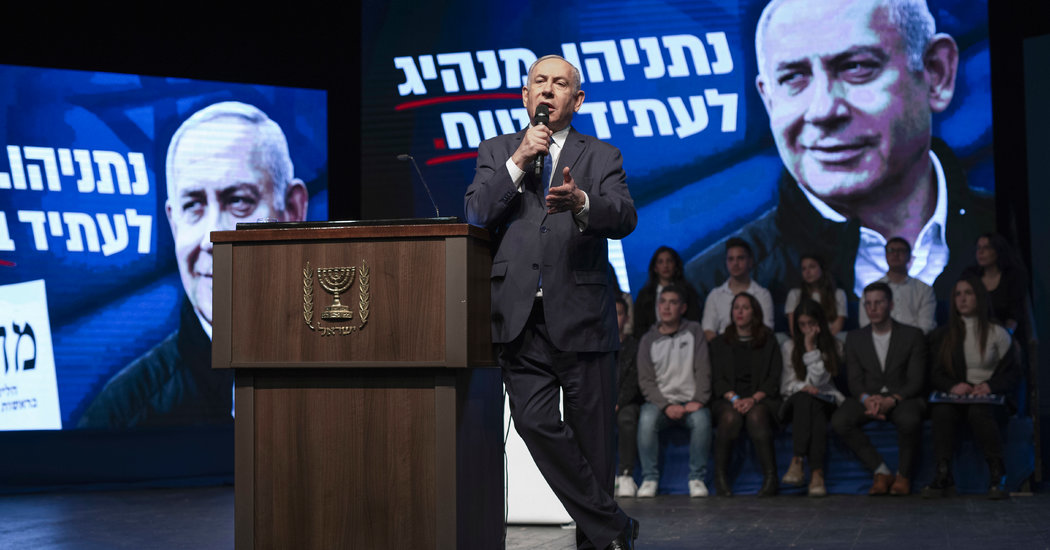 JERUSALEM — Prime Minister Benjamin Netanyahu of Israel held a significant lead in his third electoral showdown with the former army chief Benny Gantz, and was on the cusp of an outright parliamentary majority, exit polls showed on Monday night.

If the polls are borne out by official returns, Mr. Netanyahu, who faces trial in two weeks on felony corruption charges, could have the first chance to assemble a majority coalition and win a record fifth term in office.

Israeli exit polls have been unreliable, but all three major Israeli television networks gave Mr. Netanyahu 60 seats, one shy of a majority in the 120-member Parliament. Actual results were expected to dribble in for hours.

But the projected result, with Mr. Netanyahu still shy of the 61 seats in Parliament he would need to secure a new term, would set the stage for a possible constitutional showdown between Israel’s political and judicial power centers.

Since Mr. Netanyahu is facing felony prosecution, it is unclear whether the president, Reuven Rivlin, can legally invite him to form a government. The situation has no precedent and the Supreme Court, perhaps hoping a third election would render the question moot, avoided ruling on the subject in January.

But the court will almost certainly now be asked to intervene, forcing its unelected judges to choose between disqualifying an elected leader from taking power or allowing a leader who is accused of bribery, fraud and breach of trust to form a new government.

At a minimum, Mr. Netanyahu, Israel’s longest-serving premier, could use the electoral result to bolster his hand in negotiating a plea bargain.

A new term for Mr. Netanyahu now would not just challenge Israel’s democratic system, which lacks the guide rails that a constitution could provide.

It would also clear away domestic political impediments to annexing territory in the occupied West Bank, a move endorsed by the Trump administration and considered illegal by most of the world.

And it would renew the control of Mr. Netanyahu’s ultra-Orthodox allies over matters of religion and state, affecting emotionally charged matters like marriage and conversion that have torn at the fabric of Israeli society and driven a wedge between the country and liberal American Jews.

Mr. Gantz had tried to rally Israelis behind the rule of law.

He had also endorsed annexation in principle, but with the important caveat that he would not proceed with it outside of a negotiated settlement with the Palestinians or without broad international support.

Though many said they feared their votes would not change anything, or expressed revulsion at the nastiness of the campaign, Israelis flocked to the polls for the third time in a year.

Special polling places were set up in outdoor tents for people quarantined because of the new coronavirus, and lines were so long that election officials added two more such locations late in the day and extended their hours of operation. Nearly 7,000 people in quarantine had voted by 7 p.m.

Mr. Gantz, who first entered politics a year ago after a distinguished military career, made integrity and basic decency the core of his campaign against Mr. Netanyahu.

He pleaded with Israelis to rescue their democracy, saying that even a narrow advantage for Mr. Netanyahu in Parliament could spell the end of the rule of law and a dangerous slide into autocracy. He accused Mr. Netanyahu of Mafioso-like tactics and of wanting to hold onto power at any cost.

In one sordid chain of events, Mr. Gantz’s top strategist unburdened himself to a rabbi and, in the process, denigrated his client. The rabbi turned out to have been secretly recording their conversation. The tape wound up on the nightly news last week.

The prime minister denied any hand in it, but yet another recording showed Mr. Netanyahu had been directly involved.

The mudslinging and cutthroat machinations prompted Mr. Rivlin to offer an apology to the Israeli public on Monday morning.

“I have a bad sense, even a sense of shame when facing you,” he said upon casting his ballot in Jerusalem. “We simply don’t deserve this,” he added. “We don’t deserve another terrible election campaign that declines to the point of filth.”

Mr. Gantz sought to project calm in the face of Mr. Netanyahu’s attacks. He acknowledged he was not a practiced orator, and explained his occasional verbal miscues by noting that he was hard of hearing in one ear, like many military veterans, from firing a rifle.

But he was not too diffident to counterpunch. “So I don’t speak like you,” Mr. Gantz said last week, addressing Mr. Netanyahu. “Big deal. While you were taking acting classes in New York, I was defending this country.”

Some voters said they had been turned off by the ugliness of Mr. Netanyahu’s campaign, and by the criminal charges against him.

“Bibi is corrupt and his campaign was dirty,” said Rotem Cnaan, a 33-year-old shopkeeper in Rehovot who said he usually votes for Likud but sat out Monday’s vote. “I can’t hear his voice anymore, I can’t stand his intonation, and his son Yair is just shocking.”

But Netanyahu loyalists said they saw him as a statesman of extraordinary gifts. “I’m a big believer in Netanyahu,” said Kobi Dadon, a leader in a firefighters’ union, after voting in Jerusalem. “We have never had such a leader in Israel. We had Begin and Rabin, and he is that caliber.”

The acrimonious campaign was the capstone to an unusually bitter year in Israeli politics. Mr. Netanyahu’s caretaker government lacked the mandate to make major spending and policy decisions, while politicians of all stripes were distracted by the back-to-back-to-back election fights.

Though Mr. Netanyahu passed the record of David Ben Gurion, Israel’s first prime minister, to become the country’s longest-serving head of government, he also became the only sitting prime minister to be indicted on criminal charges. He was charged in November with offering political favors to media moguls in exchange for fawning coverage and expensive gifts.

The political arena also became increasingly devoid of meaningful debate as the campaign became a personality contest between Mr. Netanyahu and Mr. Gantz, who portrayed each other as, respectively, a dictator-in-waiting and a political incompetent.

Much was at stake for Israel’s relations with the Palestinians, particularly in light of the Trump administration’s green light to Israel to begin annexing West Bank territory.

Mr. Netanyahu held off on annexing at the White House’s request, but he promised right-wing voters that he would proceed after the election. Mr. Gantz also embraced the Trump plan, which heavily favors Israeli interests above those of the Palestinians, but said he would not annex West Bank territory unilaterally.

Arab citizens of Israel, who make up about 20 percent of the population, showed unusual energy heading into Monday’s vote, believing they at last had the opportunity to help topple Mr. Netanyahu, who has long tapped into anti-Arab sentiment to whip up support from his right-wing Jewish base.

With a well-financed and spirited turnout effort underway, the combined slate of predominantly Arab parties known as the Joint List anticipated winning as many as 15 or 16 seats. It now holds 13, a high-water mark. A religious woman in the list’s No. 15 spot hoped to become the first hijab-wearing lawmaker in Israeli history.

Many Arab voters were also enraged by Mr. Trump’s plan, widely referred to as the “Deal of the Century,” because it would legitimize Israeli settlements in the occupied West Bank, give Israel complete control of Jerusalem, which the Palestinians want as their capital, and severely restrict the sovereignty of a proposed Palestinian state.

“I never believed that the Parliament elections could be beneficial for the Arabs,” said Yazeed Baloum, a 33-year-old building contractor, after voting in the Arab town of Taybeh. “But Netanyahu’s racism and incitement against us made me determined to vote — as well as the Deal of the Century.”