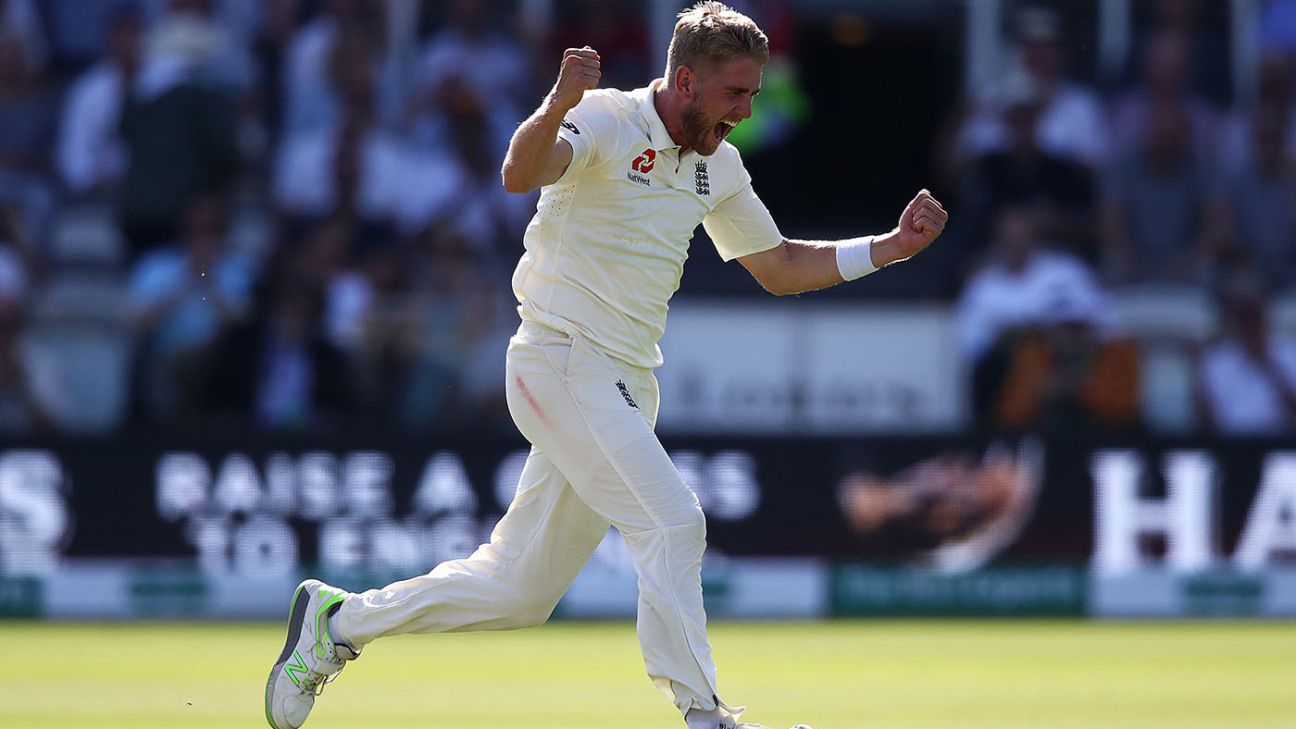 Amid the drama of Jofra Archer‘s baptism into international cricket and the explosive impact made in the fleeting appearances of Mark Wood, it might be forgotten that England have at least one more bowler capable of generating speeds well over 90mph (145kph).

Olly Stone could easily be described as England’s forgotten fast bowler. He’s only played one Test. He’s only taken one ODI wicket. But in those brief opportunities, he has shown he has the pace to complement the threat offered by Archer and Wood. And, right now, he’s said to be bowling better than ever.

With a bit of fortune, Stone might already have established himself in the England set-up. It wasn’t so much that he struck with his seventh ball in international cricket that made people take notice as much as it was the manner of the dismissal: Niroshan Dickwella caught off the glove as he tried to prevent a searing bouncer from hitting him in the throat. That was October 2018; before Archer’s debut and before Wood’s resurgence. Stone was, at that time, marked out as something a bit special.

But injury kept intervening. He was sent home from the Caribbean tour 13 months ago almost the moment he landed due to a stress fracture of the lower back. He returned in July but, after three more first-class games (one of them his maiden Test) the injury emerged once more. Instead of appearing in the Ashes – as seemed likely – he was forced to watch it on TV and he has spent part of this winter exploring opportunities as a football commentator for once his playing career ends.

“There were times, like watching the Ashes, when I felt really down,” Stone says now. “To see the other guys out there and to be with that squad at the start of it then to be told you can’t take part anymore… that is tough mentally. That taste of Test cricket makes you want more.

“The demands of county and international cricket has taken its toll over the last few years. And being out for so long and so often means it takes your body a bit of time to get used to the demands. My body hasn’t adapted to that as much as it needed to.”

But, in Graeme Welch‘s opinion, the injury could turn out to be a blessing in disguise. In the view of Welch, Stone’s bowling coach at Warwickshire, the hiatus has given Stone a chance to reassess and improve.

“If we’re really honest, he probably wasn’t fit and strong enough previously,” Welch says. “Yes, he could run in and bowl quick. But he couldn’t back it up and he didn’t have the skill he has now.

“I look back at the Hampshire game last year: he bowled really well to Ajinkya Rahane [and dismissed him for four on the way to a five-wicket haul; a performance which saw him called-up for his Test debut] but then we played Essex a few days later and he couldn’t back it up. His action started to deteriorate and that’s when injuries can occur.

“Maybe the latest injury was a blessing in disguise. He had never really had a chance to take a step back and reassess what he was doing. There was always another tour or a rush to regain fitness.

“But he’s used this period really well. He’s lost some weight [6kg, according to Stone] he’s gained some strength and he’s worked on his alignment – feet, hips and shoulder – and his wrist position. He is swinging the ball really nicely and really late. And if you swing the ball at his pace, you’re going to trouble batsmen. He’s a much fitter, much more skilful cricketer and I really do think he can play for England again this summer.”

It bodes well for England if Stone has improved. During his spell at Warwickshire, his Championship wickets have cost just 17.03 apiece – he claimed 43 at 12.30, albeit in Division Two, in 2018 – and he has claimed four five-wicket hauls in his 11 matches. Welch even suggests he can “replace James Anderson and be the perfect foil for Archer.”

“No, he doesn’t have the skills of Anderson,” Welch admits. “Anderson might be the best England have ever had. But Olly is still learning – we’re working on an inswinger now – and he is quicker. I can’t speak too highly of him.

“He’s had some really dark days. If you’ve missed out on a tour of West Indies and the Ashes, it can be hard to drag yourself into the gym at 8am on a Monday morning. And when you’ve had three major injuries, you worry that every little ache may be another serious injury. But credit to him, he has worked really hard. There’s no faulting him there. He has a lot of character.”

“If he’s bowling as I know he can, everyone will be after him. All The Hundred sides and England, too. He’s that good.”

That is a view supported by David Smith, Stone’s former chief executive at Northants. “I think people sometimes underestimate him,” Smith says. “He’s is quietly spoken and likeable. He seems unassuming and easy going. Which he is. But under that, he is quietly ambitious and a bit tougher than many people think.

“He surprised a few at Northants when he left to join Warwickshire. I think they thought he was pretty happy there. And I’m sure he was. But he wanted to get the best out of himself and knew it was time to move to a bigger club. Some players – Ben Duckett is probably a good example – get a bit comfortable at a club and stay a couple of years too long. But Olly knew that, if he was going to improve, he should move to a club with greater expectations.

“I think there was an understanding that, at a bigger club, his workload might be managed a bit better, too. It was a shame to see him move on, but it was the right move for him. He is absolutely the sort of bowler – and the sort of character – who can do well in Australia. I think the ECB have done really well to identify him as a fast bowler who needs looking after. I hope he doesn’t play a lot of county cricket.”

He probably won’t. Underlining the hopes England have in him, Stone was among the three men recently awarded the first round of pace-bowling development contracts. Welch will hold meetings with the ECB in the next couple of days which will outline how often Stone will be available for Warwickshire. It’s a tricky balance, though: Stone has only played 37 first-class games and, as Welch says “you learn to bowl by bowling.” But England will be very keen to avoid any recurrence of that stress fracture.

All being well, Stone will depart with Warwickshire’s other seamers for some pre-season work in La Manga at the end of this week. And while Welch reckons he is currently bowling at something around 80% intensity – and a maximum of 32 overs a week – he is on course to be fit for the first round of Championship matches from April 12. The Ashes will still be 20 months away but Stone admits it remains his aim.

There’s a more immediate aspiration, too. Stone missed out on a place in one of squads for the Hundred’s inaugural season, but hopes to earn a late call-up by earning one of the wildcard selections by performing in the Vitality T20 Blast.

“This year’s Blast is a real opportunity to show what I can do and maybe get a Hundred wildcard contract,” Stone says. “And hopefully I can put myself in the shop window for other T20 tournaments, too.

“And from there, you never know. Maybe I can force my way into England’s squad for the T20 World Cup. ‘Til the squad is named, I have to have a chance.”

“If he’s bowling as I know he can, everyone will be after him,” Welch says. “All The Hundred sides and England, too. He’s that good.”

Tickets for all of this summer’s Vitality Blast Group Stage matches went on sale at 10am on March 2. Fans have been urged to buy their tickets early via their local county’s website ticket page or on the ECB website ticket link: www.ecb.co.uk/vitalityblasttickets