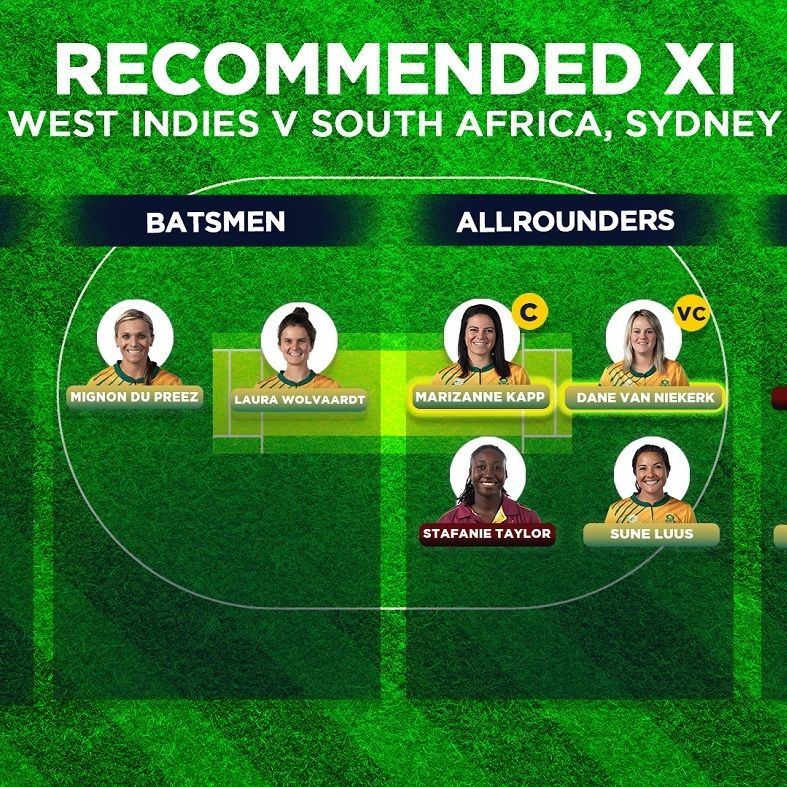 West Indies captain Stafanie Taylor has been ruled out of the match because of a right groin strain. [The video includes Taylor because it was readied in advance – our apologies for that.

Kapp scored a fluent 31 before being dismissed against Pakistan. She has now scored 69 runs in just two innings in the tournament. Though she didn’t bowl in the last game, she should bowl in this crunch game. You have to back her as the captain for her consistency with the bat and, of course, her ability with the ball.

Van Niekerk started the tournament with 46 and 2 for 20 against England. Her batting form has dipped since then but the semi-final is within sight, and you would expect her to get amongst the runs again. She has continued to play her part with the ball, though – since the first game, she has picked up two wickets in two games at an economy of 4.27.

Mignon du Preez: The second-highest run-getter for South Africa with 1701 runs at a strike rate of 100.88 has done well in the limited opportunities she has got so far. Du Preez finished the game off against England and scored a decent 17 in the previous match against Pakistan. Now that is batting higher up the order, at No. 4, you should back her to get more runs.

Shabnim Ismail: Ismail has been bowling with great pace and skill, intimidating batters. Against an out-of-form West Indies top order, she should pick up a few wickets. Her strike rate in the tournament is 13.4.

Laura Wolvaardt: Wolvaardt has played only one innings so far and scored an unbeaten 53 in that. She usually opens the batting in ODIs but has been given the role of a finisher, and while she might not get too many balls to face, unless there’s a collapse, she is a safe bet.

Afy Fletcher: Fletcher has picked up a wicket in all three games and also bowled economically. Her economy in the tournament is 6.10 and on a wicket that assists the spinners, she could be a handful.

Nonkululeko Mlaba: Mlaba bowls most of her overs in the powerplay. Since the first game against England, she has bowled eight overs, conceded just 24 runs and picked up two wickets. West Indies have lost five wickets for 47 runs to left-arm orthodox spinners in 10.1 overs in the tournament so far.