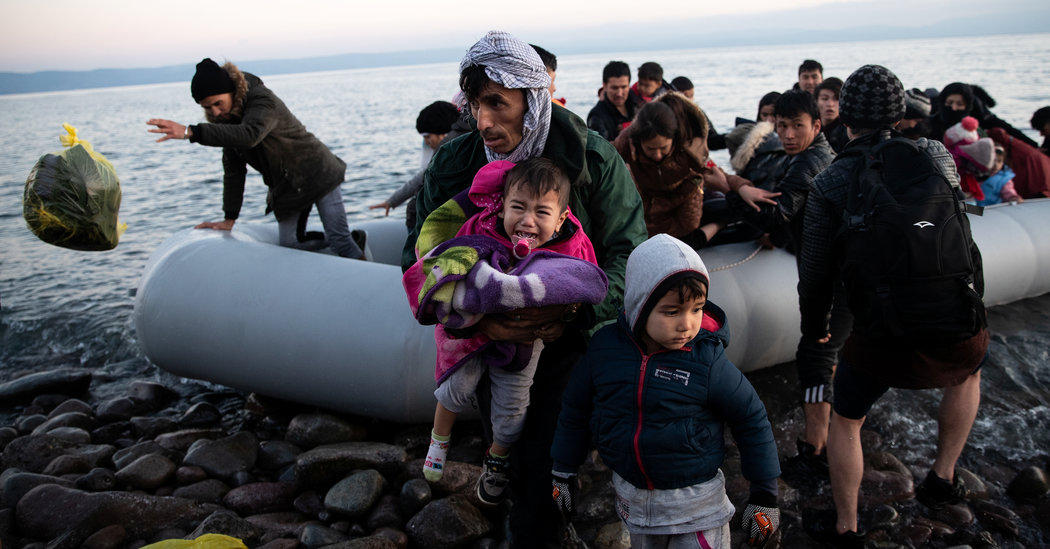 EVROS, Greece — A child drowned on Monday when a dinghy carrying 48 migrants capsized while trying to reach the Greek island of Lesbos from the Turkish coast, the Greek Coast Guard said.

It was the first confirmed death since Turkey declared late last week that it was ending its policy of blocking migrants trying to cross into Europe, saying it could no longer take in so many people fleeing the Syrian civil war.

Over the weekend, Greece accused the Turkish government of becoming “a smuggler itself,” and deployed major military forces to the long land and sea borders it shares with Turkey. The Greek government also said it would suspend asylum applications for a month and deport anyone arriving illegally.

Neither of those measures is allowed under European Union law, but Athens said it would request special dispensation, and the European Commission said it was studying the announcement. International protocols on the protection of refugees, of which Greece is a signatory, also ban such policies, although there can be exceptions under extreme conditions.

Clashes have been raging between migrants and riot police officers along the land border between Turkey and Greece since late last week, as thousands of migrants flocked to the frontier, some bused in from Istanbul by Turkish officials. The Greek authorities used tear gas, batons, stun grenades and rubber bullets to repel the migrants.

Videos shared on social media also appeared to show evidence of dramatic confrontations — such as Greek Coast Guard officials pushing back on a dinghy full of migrants — but it was not possible to verify them independently. The Greek government shared videos that it said showed Turkish border guards throwing tear gas against the Greek guards in an apparent effort to help the migrants charge the border. Those videos could also not be independently verified.

The child’s death at sea and the clashes at the border quickly raised fears of a new chapter in the migrant crisis that roiled Europe in 2015, leaving a legacy of division and giving a boost to the far right on the Continent. There was no indication that the Greek authorities were at fault in the child’s drowning on Monday.

While the overall number of deaths of people trying to cross the Mediterranean has fallen compared with recent years, there are fewer rescue ships available, and the crossing continues to be dangerous.

More than 3.6 million Syrian refugees have fled into Turkey since the Syrian civil war began nine years ago. President Recep Tayyip Erdogan of Turkey has long called for European support to help them.

Over the weekend, the United Nations estimated that about 15,000 people from several countries, including families with children, were on their way through Turkey to the northern land border with Greece. The Greek government said it had stopped nearly 10,000 crossing attempts in 24 hours and arrested 150 people. But dozens of migrants in small groups could be seen in some of the border region’s villages.

Greece bore the brunt of the 2015 crisis and hosts more than 100,000 migrants in appalling conditions, many on its northeastern Aegean Islands.

“The borders of Greece are the external borders of Europe,” Prime Minister Kyriakos Mitsotakis of Greece said on Sunday. “We will protect them.”

The United Nations refugee agency said in a statement on Monday that, “All states have a right to control their borders and manage irregular movements, but at the same time should refrain from the use of excessive or disproportionate force and maintain systems for handling asylum requests in an orderly manner.”

In televised remarks from the Turkish capital, Ankara, on Monday, Mr. Erdogan said he had opened his country’s borders after many warnings to Europe that he would push refugees toward the Continent.

He said he had told the European Union, “If you do not share the burden with us, we will open those doors.” But he added, “They thought we were making a joke.”

Mr. Erdogan said Western countries would now have to account for their actions barring refugees, and repeated his call “to establish a safe zone” for refugees.

“Either we will make those people have an honorable life in their own land, or everyone will take their share from that burden,” he said. “Now the period of one-sided sacrifice is over.”

Mr. Erdogan has also called for European support for his military operations against a Russian and Syrian offensive in northern Syria that has displaced at least a million more Syrians toward Turkey’s border in recent months.

In a news conference on Monday at the European Union’s crisis center, Ursula von der Leyen, president of the European Commission, said she and two other European leaders would travel on Tuesday to meet with the Greek government and to visit the Turkish border.

The bloc has expressed support for Greece in its effort to stop uncontrolled migration from Turkey. Ms. von der Leyen said Europe’s border agency, Frontex, would gather equipment and personnel to help Greece defend its borders.

“I acknowledge that Turkey is in a difficult situation,” she said. “But what we see now cannot be an answer or a solution.”

She added that Europe would stick to the agreement it already has with Turkey — providing money to help house refugees and migrants — but that there would be further talks with Ankara “to find once again common ground.”