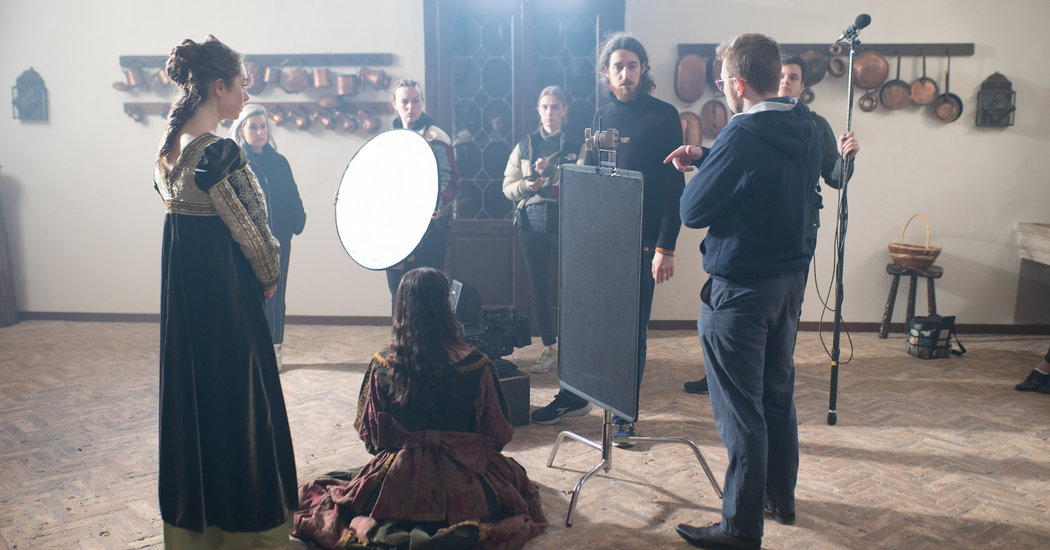 It was to be a short film based on “The Decameron,” a 14th-century classic of Italian literature in which 10 people hole up in a villa to try to escape the plague.

On Monday, Mr. Hulbert, 26, was shooting at a similar villa in Lugo — a town 55 miles from Venice — when he received a text. It was from his mother.

“I so hope everything is going well today,” it started, cheerily. Then its tone changed somewhat. “I sent you an email about the coronavirus, which I really think you need to consider,” it said.

“Sorry! Love and many hugs,” it added.

He checked the email, which said in part: “This is the last thing you needed, but I’m afraid the coronavirus situation is rather worrying.”

It was the last thing he needed. His reaction: A simple “Er, thanks, Mum.”

But Mr. Hulbert said that text was the main moment he realized that making a film about people hiding from a life-threatening disease had suddenly collided with a real-life event: the fast-spreading and dangerous coronavirus outbreak.

“It’s certainly been strange,” Mr. Hulbert said in a telephone interview on Friday. “This synergy between what we’re working on and what’s been happening in the world, with the quarantine line getting closer.”

“It’s obviously incredibly tragic,” he added about the outbreak that has swept into 56 countries, infected more than 83,000 and killed over 2,800. “But it’s certainly been very helpful for the actors to draw on, I think.”

The actors would all discuss it over the table at lunch, he added. “I look up and someone’s looking a bit worried and you don’t know if they’re getting ready or they’re freaking out a bit,” he added.

Over the past week, Italy has become Europe’s major center of the coronavirus outbreak, with 888 cases and 21 deaths. Last Sunday, the day after Mr. Hulbert arrived in the country, the authorities started locking down towns, closing schools and canceling sports and cultural events in northern Italy in an attempt to control the outbreak.

Mr. Hulbert said his production had been lucky as it was mainly “self-isolating,” with the cast and crew spending all day filming, then heading to a hostel to sleep. They spoke to only two people outside the production, he added. One was the hostel owner, who was annoyed about the virus, because it had led holidaymakers to cancel bookings. The other was the Italian aristocrat who owned the Renaissance villa where the film is being made.

“He’s a jolly guy,” Mr. Hulbert said, “and doesn’t seem worried about it.”

Despite the film crew’s isolation, the outbreak has been on everyone’s minds, Mr. Hulbert said. On Tuesday, the cast was standing in the villa, shooting amid its frescos and antique furniture, when a loud alarm started going off nearby.

“We didn’t know what it was,” Mr. Hulbert said. “It sounded like an old Blitz-era, World War II, air raid siren, and the first time we heard that, we were like, ‘Oh my God, are people going to be turning up in hazmat suits?’”

Everyone thought it might be related to the coronavirus, but it turned out to be the signal for the start of a factory’s lunch break.

“We started joking about it in a way that wasn’t a joke,” Mr. Hulbert said, adding, “There’s been a lot of jokes that weren’t quite jokes.”

The filming wrapped up on Thursday, and the British-based members of the crew planned to return home on Saturday.

Rachel Browne, the film’s lead actress, said in a telephone interview that she had managed to keep thoughts of the coronavirus at bay thanks to the busyness of being on a film set.

But even for her, she said, there were moments that brought the outbreak home, such as the cast’s decision on Wednesday to panic-buy food, drinks and hand sanitizer.

“It wasn’t a ‘Board up the windows and just send out two people in a car’ panic buy,” she said. “It was more ‘Let’s be sensible.’”

The outbreak had helped her prepare for the movie, she said. When she landed the role last year, she used her imagination to decide how her character would behaved when fleeing the plague, she said. But in recent weeks, she had read about the new coronavirus and realized the panic and terror “and huge human vulnerability which comes with not being able to see your enemy.”

Realizing people’s lack of control in such a situation was eye-opening, she said.

Ms. Browne, 28, said she did not think she had the virus but realized she had a “huge level of responsibility” to self-isolate when she returned to London on Saturday.

“I’d thought I was going to go home, maybe unpack tomorrow and do my washing on Tuesday,” she said. “But I can’t just go home now and be, like, ‘I’m fine.’ That’d be selfish.”

Mr. Hulbert said he was not sure if the crisis would affect his approach to future films. He specializes in making period pieces shot in “authentically amazing” locations, which could be outside Britain.

“I don’t know what we could change,” he said. “We can’t predict the next coronavirus.”