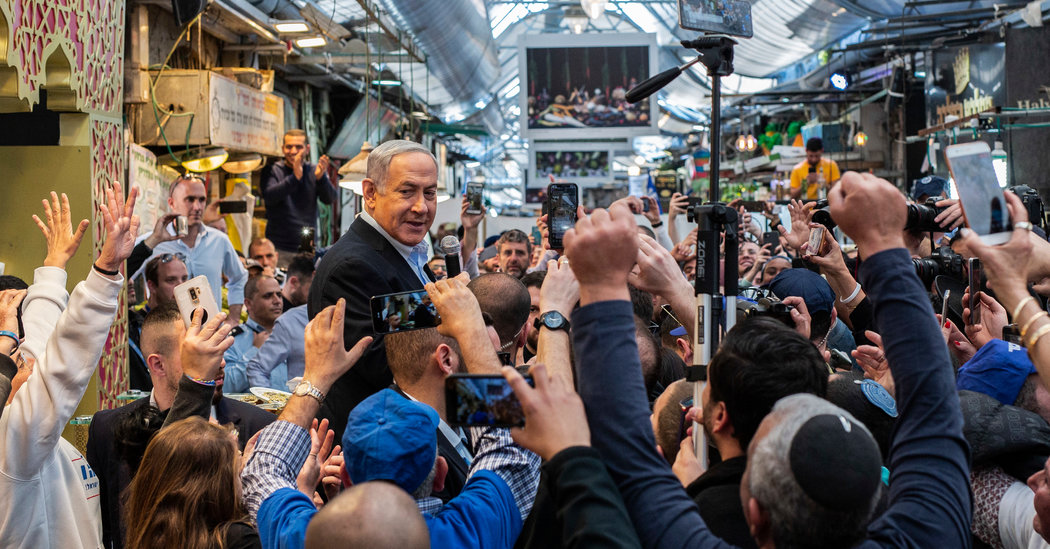 JERUSALEM — Heading into the third Israeli election in a year, the candidates got desperate. And things got ugly.

In a deadlocked race ahead of Monday’s vote, Benny Gantz, the former Israeli Army chief, is trying to unseat Benjamin Netanyahu, the longtime prime minister, whose criminal trial on bribery and other corruption charges is to begin on March 17. The first two votes, in April and September, were inconclusive: Neither man was able to form a governing majority.

Mr. Gantz’s top strategist called his client a coward in a private conversation with his rabbi. The rabbi was secretly taping him; a day after the rabbi met with Mr. Netanyahu, the recording aired on the nightly news.

Some of the damage was self-inflicted.

A top Netanyahu adviser boasted, in another leaked recording, that “hatred is what unites” the prime minister’s political base. Aggravating old enmities between Ashkenazi Jews, who are descended from Europe, and those with roots in North Africa or the Middle East, the man said that mudslinging appealed to many “non-Ashkenazi” voters and that Mr. Netanyahu’s non-Ashkenazi culture minister, a woman of Spanish- and Moroccan-Jewish descent, was a “beast.”

All along, the prime minister had suggested Mr. Gantz was mentally unstable or even demented, mocked his occasional malaprops and stammering, and insinuated that Mr. Gantz would jeopardize Israel’s security by forging a governing coalition with Arab lawmakers.

But until now, Mr. Gantz, promising to restore dignity and decorum to Israel politics, had stayed focused on the idea that Mr. Netanyahu had lost the moral standing to lead, given the criminal charges against him.

That forbearance had been part of Mr. Gantz’s appeal, though some voters said they found him too “parve” — a dietary category under Jewish law that is neither meat nor dairy, which must not mix, but in between. It was a gentle way of calling him bland.

This past week, Mr. Gantz finally delivered some red meat to his supporters.

“Because of your obsession with evading trial, you’re lying, attacking, dividing, mudslinging, spreading malicious rumors and inciting,” he said in an angry speech on Wednesday. “Netanyahu, you’re poisoning Israel.”

And at a culminating rally on Saturday night, Mr. Gantz, 60, told supporters that Mr. Netanyahu “acts like a mafioso.” He said Mr. Netanyahu would stop at nothing to retain power, even if it meant tampering with the election, passing new laws to get himself out of legal jeopardy or overturning Supreme Court decisions.

In fairness, there was much more to Mr. Netanyahu’s campaign than lies and toxicity.

A consummate showman, and almost certainly the finest political performer Israel has produced, Mr. Netanyahu seemed energized by the challenge of sustaining interest among voters with little appetite for another election.

True, Mr. Netanyahu’s criminal trial may have added to his motivation this time: A strong showing in the election could help him negotiate a lenient plea bargain or presidential pardon. A 61-seat majority in the 120-member Parliament could, as Mr. Gantz warned, embolden Mr. Netanyahu to try to legislate himself out of legal jeopardy altogether.

Whatever was driving him, Mr. Netanyahu, 70, was plainly driven.

He held half a dozen events a day, all over Israel. He took to speaking in front of clusters of Israelis of different ethnicities, signaling visually, American-style, that his support was strong and diverse.

He gave so many interviews that his familiar baritone went hoarse — demonstrating again why observers of his long career say that no Israeli has ever wanted to be prime minister more.

And Mr. Netanyahu tossed around campaign promises like a late-night infomercial host.

For Ethiopian-Israelis, he promised to airlift a few dozen Jews still in Ethiopia. For tens of thousands of marijuana smokers, he promised to expunge their criminal convictions for using the drug.

For Arab citizens, he let it be known he would repeal a law that made it easier to demolish homes built without the required permits — though that law had been enacted by his own government and was aimed squarely at Arab villages, where building permits are notoriously difficult to obtain.

He even offered to try to arrange direct flights to Saudi Arabia, a country with which Israel still does not have formal diplomatic ties, to lower what it costs Muslims to make pilgrimages to Mecca.

“Everything is going, fast and cheap,” the journalist Orit Lavi-Nesiel wrote in the newspaper Maariv.

Israelis tend to take a jaundiced view of Mr. Netanyahu’s promises. A onetime furniture salesman, as a politician he has often hawked merchandise that he did not actually have in stock, so to speak.

Still, Mr. Netanyahu’s promises to right-wing voters, if kept, would threaten the always-fragile status quo between Israel and the Palestinians.

He vowed to annex some West Bank settlements last April, and promised in September to annex the Jordan Valley, a strategic strip of West Bank land along the Jordan River.

In January, Mr. Netanyahu heartily embraced the Trump administration’s Middle East plan, saying he would pursue the annexation of all Israeli settlements in occupied territory.

Not content to stop there, Mr. Netanyahu reached for two more powder kegs.

On Feb. 20, he announced plans to build 6,200 housing units in contested East Jerusalem, including 4,000 in Givat Hamatos, which would nearly sever Palestinian areas of East Jerusalem from the nearby Palestinian city of Bethlehem.

This past week he went further, saying he would build 3,500 housing units in a vast tract known as E-1, just outside East Jerusalem, that would effectively bifurcate the West Bank, forcing a driver from Ramallah, north of Jerusalem, to detour deep into the Judean Desert to get to Bethlehem.

Perhaps the biggest surprise of Mr. Netanyahu’s campaign was that he actually promised victory.

This is what American politicians always do, of course, right down to the moment they concede. But Mr. Netanyahu ordinarily sounds the alarm right up until he wins, pleading with supporters to come to his rescue at the ballot box.

Eyeing polls showing Mr. Gantz’s Blue and White party slipping behind Mr. Netanyahu’s Likud party, and Mr. Netanyahu pulling away on the question of who was more suitable to lead, Mr. Gantz direly warned voters that a vote for anyone but him was a vote to keep Mr. Netanyahu in the official residence on Jerusalem’s Balfour Street — and for the end of Israeli democracy.

“Either Blue and White at the ballot box or Erdogan in Balfour,” Mr. Gantz wrote on Twitter on Saturday, alluding to the autocratic president of Turkey.

Mr. Gantz’s apparent slide, which rattled his campaign and prompted liberals in Tel Aviv to post signs warning of the death of Israel, began about 10 days before the election, when the state attorney kicked off a new investigation into a security consultancy that Mr. Gantz had led between his army service and his entry into politics.

The investigation was begun by the handpicked appointee of Mr. Netanyahu’s handpicked justice minister, a Likud loyalist. Still, the news may have sufficed to allow some fence-sitters to tip back into Mr. Netanyahu’s camp, rationalizing it by saying that all politicians are crooked — a frequent Israeli refrain.

A great deal had been riding on Mr. Gantz’s image as a clean politician.

He made character an issue in all three contests, but Mr. Gantz’s advertising this time made the contrast more directly personal. Blue and White’s billboards showed his face next to Mr. Netanyahu’s, declaring that the prime minister was concerned only with himself, while Mr. Gantz placed Israel’s interests before his own.

Mr. Gantz also sought to take other issues off the table to focus attention solely on Mr. Netanyahu’s criminal trial.

But he did so by repeatedly seconding Mr. Netanyahu: embracing annexation, embracing the Trump plan and even vowing, under pressure from Mr. Netanyahu, to form a government only with a “Jewish majority” — accepting the right-wing view that relying on Arab support was illegitimate.

Those moves alienated voters on the left, and persuaded few on the right, analysts said.

“The problem with that is, if we’re just going to get another Bibi, why not stick with the original, rather than a copy?” said Gadi Wolfsfeld, a political scientist and professor at the Inter-Disciplinary Center-Herzilya, using Mr. Netanyahu’s nickname.

Even Mr. Gantz’s single-minded focus on Mr. Netanyahu’s trial carried some risk, Mr. Wolfsfeld said: It meant that he was constantly repeating himself about something on which most voters had long since made up their minds.

“The truth is, it’s not news until the trial happens,” he said, “and therefore Gantz doesn’t have anything to say, other than ‘Bibi’s a crook.’”