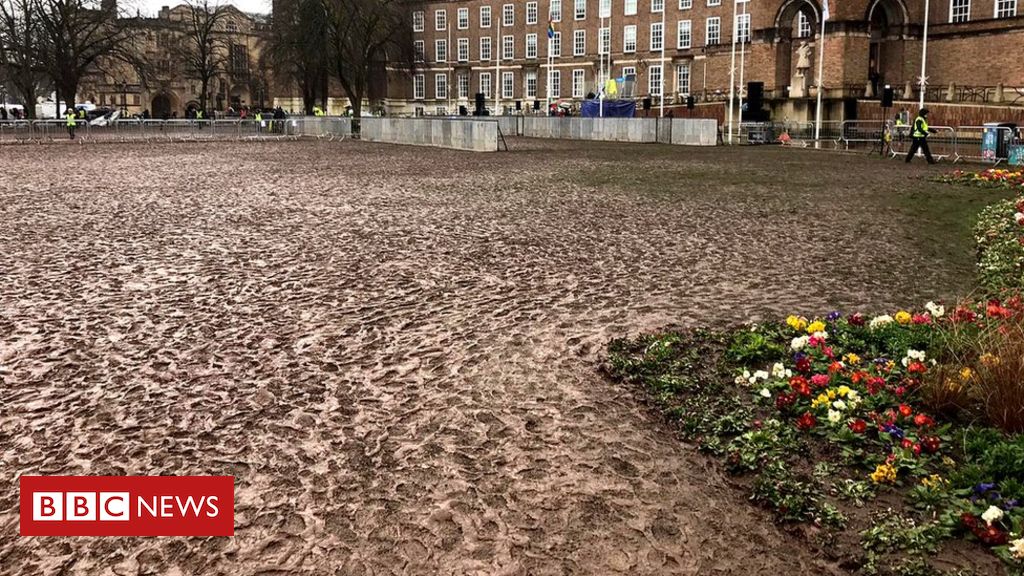 Hundreds have called for the organisers of a Greta Thunberg climate change rally to pay for damage caused to green space.

Around 15,000 people are believed to have attended Friday’s Bristol Youth Strike 4 Climate rally, churning up College Green and angering many.

A fundraiser was set up for repairs, which then resulted in calls for rally organisers to cover the costs.

The organiser said people had done their best in the muddy conditions.

Climate campaigner Greta gave a speech on College Green before leading a march around the city.

The combination of thousands of people and heavy rain turned much of the grass into mud, angering some.

Gavin Mountjoy commented on Facebook: “Oh the irony, hundreds of people turning up to talk about our planet dying end up destroying a green area.”

Barrie Moore, also on Facebook, said: “The organisers of this march should be made to pay for the damage.”

Jon Usher, head of partnerships of Bristol-based charity Sustrans, set up a GoFundMe page after the march ended, aiming to raise £20,000.

By Sunday morning more than £9,000 had been donated.

Mr Usher, who attended the rally, said: “I did it knowing how important the green is to our staff as a place to go in the spring and summertime.

“I thought it would be nice to give something back to the city.”

Bristol City Council, which is responsible for College Green, said it will examine the area on Monday.

Kai Damani, one of the event’s organisers, said people had done their best in the conditions.

“When you look at College Green now, most of it is completely brown but where the flowers are is completely intact which does show that people do care about wildlife,” he said.

Avon and Somerset Police had raised safety concerns before the event, but Supt Andy Bennett praised the organisers afterwards.