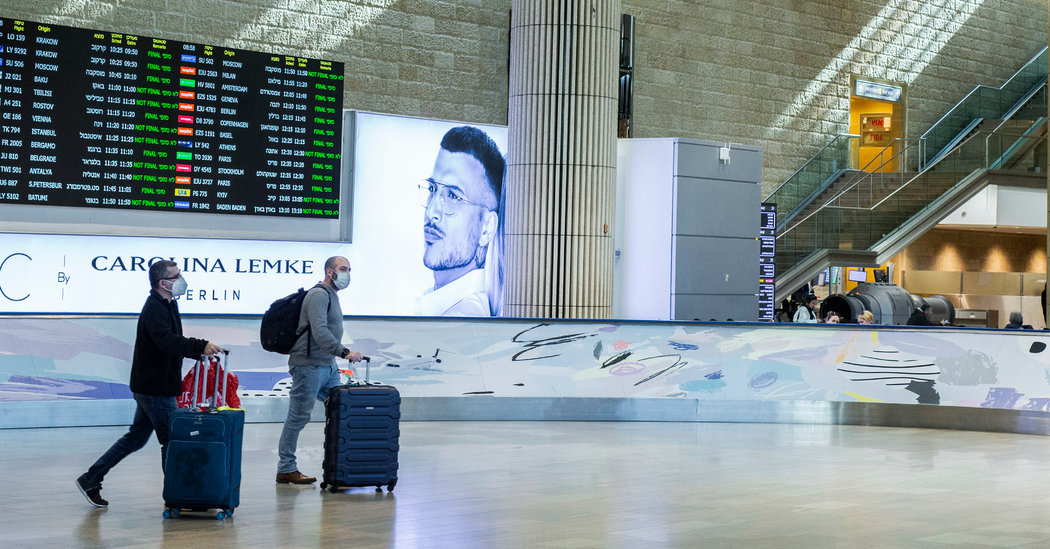 TEL AVIV — For passengers hurrying through the departures hall of Israel’s main airport on Sunday, many with their faces covered by masks, there was one big conundrum: Should they stay or should they go?

It wasn’t just the threat of the coronavirus spreading around the world that made them think twice about traveling. It was the thought of missing Israel’s general election on Monday — the country’s third in less than a year.

“I really want to have an effect on the election,” said Romi Zehavi, a 19-year-old off to ski in the Alps.

Her conscience was ultimately assuaged by the thought that Monday’s vote would most likely end in yet another stalemate, and yet another chance to vote later in the year.

So Ms. Zehavi stuck with the skiing.

“It’s fine, we have a lot of elections here,” she said, her voice slightly muffled by her face mask. “There’s always a chance of another one.”

With less than a day until polls opened, Israel was in a mild frenzy this weekend, as the twin storms of the coronavirus epidemic and an increasingly vicious political campaign began to collide.

As Prime Minister Benjamin Netanyahu and his chief rival, Benny Gantz, made last-gasp efforts to drive voters to the polls, some Israelis were wondering whether it was safe to cast ballots at all.

To date, the coronavirus has had fairly limited direct effect in Israel, with about 10 confirmed cases inside the country. But there was public alarm after several Israelis contracted the virus aboard a Japanese cruise ship, and nine South Korean tourists tested positive for the illness after returning home from a week in Israel.

The Israeli authorities have also adopted more stringent travel restrictions than many other governments. Nonresidents arriving from countries where the illness has taken root, like Italy, have been refused entry and returned on the same planes they arrived on.

And with the election nearing, the government set up separate polling stations for those who have recently returned from coronavirus hot spots.

At Ben Gurion Airport, just outside Tel Aviv, dueling forms of angst swirled through the departure and arrival halls on Sunday, with some passengers returning to vote and others worrying that they risked infection by leaving.

For Noga Perry, a 29-year-old translator returning from Athens, the two crises, political and epidemiological, had effectively converged.

“We might vote for corona,” Ms. Perry said, laughing.

“It would,” she whispered in jest, “be better than Bibi.”

A young father rubbing his hands with sanitizing gel said he was feeling both sad to miss the vote and worried he was endangering his children by taking them skiing.

An older couple were relieved to return for the election, but feared they might have put their grandchildren at risk by visiting them in America.

A South Korean cleaner said he feared his hotel might fire him if guests complained about the presence of an Asian staffer.

And Ms. Perry wondered if she might be put in quarantine.

No one shook anyone’s hands.

“Israelis love their panic, we love our drama,” said Danielle Kalev, Ms. Perry’s partner, who was relatively sanguine. “If I die, I die. What can I do except obsessively wash my hands with gel?”

A rabbi ambled past, his face covered by a pale blue mask.

Rabbi Shimshon Eisenberger, 52, was just off the plane from Hong Kong, and had therefore been ordered to stay away from his synagogue and self-quarantine at home.

“I’ll have to read my scrolls on my own,” he said, a little forlornly.

The quarantine rules felt slightly byzantine, he said with a sigh.

“I can meet with 20 people in my apartment,” said Rabbi Eisenberger. “They can go out outside, but I can’t. It sounds weird, but those are the rules!”

In any case, his self-quarantine had effectively already been broken. A passer-by had approached with an angry question: If the rabbi really believed in God, why was he wearing a face mask?

“God says you have to keep yourself healthy,” he said with a smile. “God wants you not to put yourself in jeopardy.”

At least he would still be able to cast his ballot, he said, thanks to the special polling stations for quarantined citizens.

“I will not miss the opportunity,” Rabbi Eisenberger said. “I missed the last one.”

Amid all the anxiety and the coming and going, a second rabbi was keeping his mind on the bigger picture. Shuffling past the arrivals board, Yehiel Maccabi pulled a maroon trolley, seemingly oblivious to the bustle around him.

Rabbi Maccabi was neither arriving nor departing. God sends him to pray every day at the synagogue in the arrivals hall, he said, “because there is no spirit in the people here.”

He squinted uncertainly at the mention of coronavirus, slowly repeating its syllables as if they were individual words.