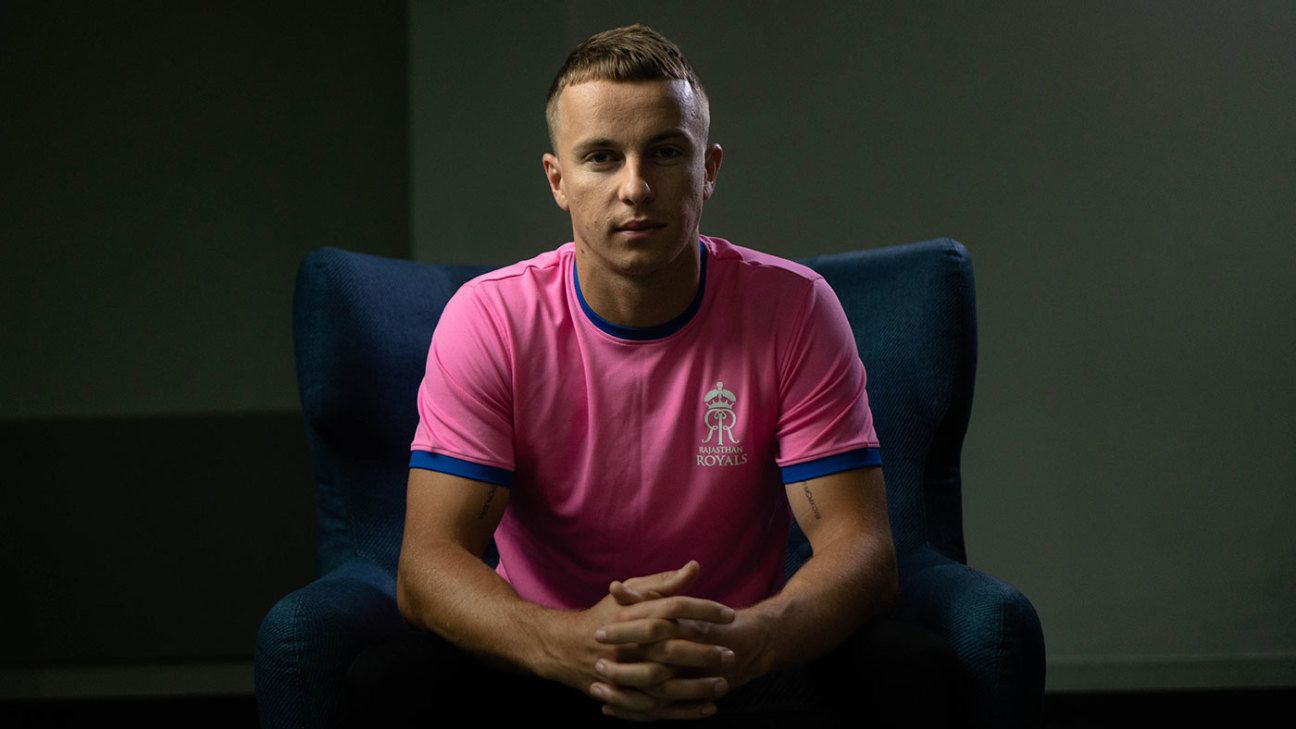 Deception and subterfuge are key parts of the armoury of a T20 death bowler, but for Tom Curran, Rajasthan Royals’ latest English recruit, those traits may have to be deployed in the nets at Jaipur too. That’s because, with the T20 World Cup looming large on the horizon, a number of his IPL colleagues – not least the team’s Australian head coach, Andrew McDonald – are likely to be grateful for an insight into his mindset come October.

Curran’s growing reputation in the crunch moments came to the fore in England’s recent T20I win in South Africa, where he held his nerve with the series on the line to seal a two-run win in the second match at Durban.

Having started the final over of that game with a healthy 15 runs to defend, Curran and England were pushed to the brink of a series defeat when Dwaine Pretorius connected with a six and a four from consecutive balls to take the requirement down to five from three.

But from that point on, Curran found the resolve to seal the contest, producing a pair of fine yorkers followed by a perfectly executed back-of-the-hand slower ball, that the new man on strike, Bjorn Fortuin, could only flick over his shoulder to short fine leg.

“That’s cricket, it can go the other way very quickly,” said Curran during a Rajasthan Royals event in London. “But that game was really big for me. At the start of the over I should have been defending it anyway but, with three balls to go, they were on top. So looking back on it, I was really proud of that. The fact that, in that moment, I had no choice but to execute and I managed to do so.”

As Curran recalled, there had been a meeting of England’s brains trust before that final delivery, with the captain and vice-captain, Eoin Morgan and Jos Buttler, in on the discussions, along with the experienced Chris Jordan. But ultimately, as soon as Curran was clear in his own mind what needed to be done, that was the end of the matter.

“I was weighing up the options,” he said. “I’d just bowled two good yorkers, so if he tries to stand there and whack it, if it’s on the money then a yorker is still a good option. But I just thought a slower ball, he actually has to hit it for four, whereas a yorker you can still nick it for four.

“I just went with my gut really, and when I said that to Morgs and Jos, everyone was like ‘cool, let’s go with it’. Luckily it came off.”

No doubt his new employers were watching that performance closely. For, with Jofra Archer, Rajasthan Royals’ go-to at the death, set to miss at least the first half of the tournament as he recovers from an elbow fracture, Curran knows that the coming tournament offers him a massive opportunity to cement a role, and his reputation, ahead of the World Cup.

“It’s an unbelievable standard at the IPL, so it’s a great experience for me,” he said. “These are sold-out games and it’s proper loud. So it’s mirroring as close to the biggest games on the international circuit, what they’ll be like. It will be a great experience. If guys go there and do well, they’ll take a lot of confidence from that. That’s what it’s all about.”

Curran has had one previous taste of IPL action when, in April 2018, he was called up by Kolkata Knight Riders as a late replacement for Mitchell Starc, and performed creditably with six wickets at an economy rate of 11.60 in five matches. This time, however, he was picked up by Rajasthan for his base price of INR 1 crore (approx. £110,000), where his profile will doubtless be raised by the presence of two of the most influential members of England’s white-ball squads, Buttler and Ben Stokes.

“I’m really looking forward to it,” he said. “I’ve already played a lot of cricket now with the guys there, so it makes it that much easier. Especially being somewhere like India, where it’s a busy hectic schedule, to have those familiar faces there will be nice.”

Not all the familiar faces will be on the Curran’s side come October, however. Rajasthan’s squad contains two overseas stars in particular – Australia’s Steve Smith and South Africa’s David Miller – who may find themselves at the other end of the pitch come the World Cup. And when it comes to sharing knowledge during the IPL, weaknesses as well as strengths, Curran conceded he’d have to be cautious about being too open.

ALSO READ: ‘Test cricket is the best form of the game’ – Jos Buttler

“I don’t think you chat weaknesses with loads of people anyway,” he said. “There’s a few people who you might trust, and you might ask, ‘what does Steve Smith do in this situation?’ but it’s more about developing and getting better, which we players focus more on.

“If I’m bowling in the nets to some of the Indian guys, I’m not going to be showing them all the tricks. But that’s a huge benefit of having Jos, Stokesy and these guys. I think you actually learn a lot too. Speaking to Jos I’ll learn about batting. You just need to have some of the players on the international stage to talk to, and try things with.”

However, Buttler, who was also present at the event, added that there was some merit in sharing a bit more of your repertoire with future rivals, because too much knowledge can be used against your opponent in the heat of battle.

“It evolves, as well,” said Buttler. “TC will show someone his slower ball – you can use it both ways. It can be a bluff as well. He might say: ‘Yeah, I always bowl this slower ball.’ But there will be times when TC says at the end of his mark, ‘Yeah I said to Smith in the nets that I bowl this ball, so let’s bowl something else.’ That might become part of your [repertoire].

“It definitely does happen,” Curran added. “You’ll be aware of it. If you have it in the back of your mind that I’ll throw in the odd curveball in there.”

As for McDonald, Rajasthan’s highly-rated new head coach, Curran insisted that his dual status as Australia’s assistant coach would have little bearing on their relationship, even though the Aussies are set to go into their home World Cup as favourites after winning nine of their last ten completed T20Is.

“It seems to be the way things are going now,” he said of McDonald’s roles. “I don’t think it will make too much of a difference. It will be great to work with him there and he’ll be fully involved once he gets to India.

“I haven’t worked with him full-time but I have bumped into him,” he added. “Nowadays you tend to bump into people and have conversations, so it will be a really good experience.

“You’re always going to have coaches, but it’s about filtering information. There are things that people say… some people you’re going to listen to, and you almost build up that relationship over time from working with someone.

“If a [new] coach comes and gives you some information, you take it with a pinch of salt. You don’t want to be making massive technical changes mid-tournament, but it’s different for everyone.”