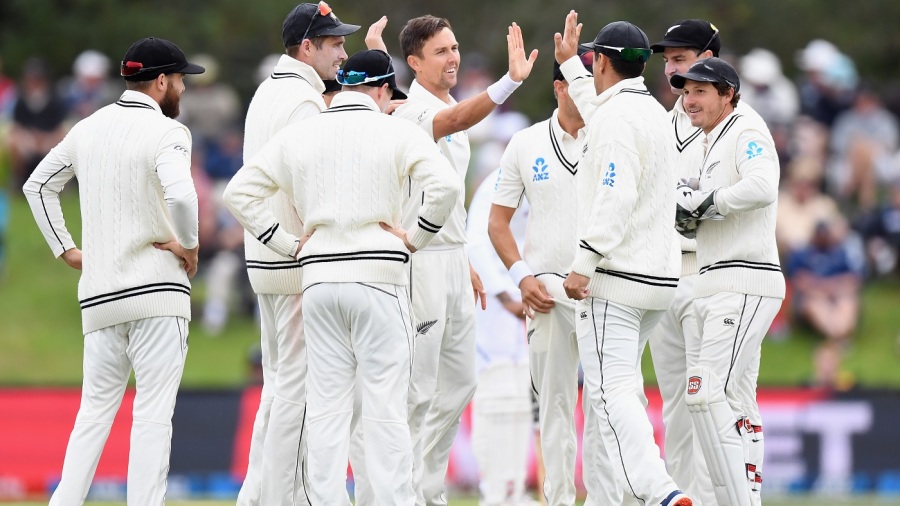 New Zealand took massive strides towards a 2-0 series win by taking the last four India wickets for the addition of 34 runs, and knocking off 12 more than those by lunch without losing a wicket. On paper it was “only” 132 that New Zealand needed to chase, but the conditions made for a torrid examination of the batsmen. This is where the depth in New Zealand’s five-man seam attack outshone India’s three-man party, which was missing Ishant Sharma to boot.

On the third morning, though, New Zealand needed just the two men and 47 minutes to bowl India out for 124. In the process Tim Southee also hit Mohammed Shami on the shoulder with a bouncer, which delayed his introduction, and Umesh Yadav released the pressure a little with boundaries in each of his first three overs. Shami had a go for three overs at first-change, but with the score at 46 for 0 and a troublesome shoulder to manage, it was quite possible he might not continue after lunch.

That doesn’t take away, though, from the torturous conditions for the batsmen. That is exactly why New Zealand would have wanted to dismiss India for as little as they could on the third morning. They succeeded with the task with the first three wickets. Hanuma Vihari was a tad unlucky that he tickled one down leg for BJ Watling to take. It is perhaps not unlucky on flat surfaces, but here when you are watching out for seam, swing, bounce and trying to cover your off stump, it seems like a rather cruel way to get out.

Shami showed the right intention when he went for a slog, but he ended up hitting into the wind, and also New Zealand had a deep forward square leg in place just for that. India’s lead read 115 at that time, but Ravindra Jadeja and Jasprit Bumrah proceeded to frustrate New Zealand. Jadeja’s six back over Boult’s head was special while Southee kept swinging it past the bat of Bumrah. To the last ball of an over, Bumrah wanted to run to hand over the strike to Jadeja, but Boult had done well to cramp the batsman up with a short ball. It went nowhere, Boult fielded well in his follow-through, and Kane Williamson did better to be there to collect the throw as it missed the stumps.

New Zealand corrected their mistake from the second morning, and asked for a heavy roller, which settled the pitch down for 20 minutes or so. In that period, Yadav provided a few loose balls to get New Zealand going. Toms, Latham and Blundell, showed remarkable application and intent, putting behind them every play and miss, every blow to the body, and every bit of prodigious seam movement. Whenever a scoring opportunity presented itself, they were up for it, especially when it came to running aggressively.

The ninth over of the innings underlined how difficult the conditions were. Bumrah swung and seamed each of those balls from a length, drew an inside edge from Blundell that Pant’s dive couldn’t catch up with, and nearly bowled Latham twice. The batsmen made no mistake on any of those occasions.

However, every time a bowler overpitched or provided width on a short ball, the two pounced on it, ending the session unseparated.