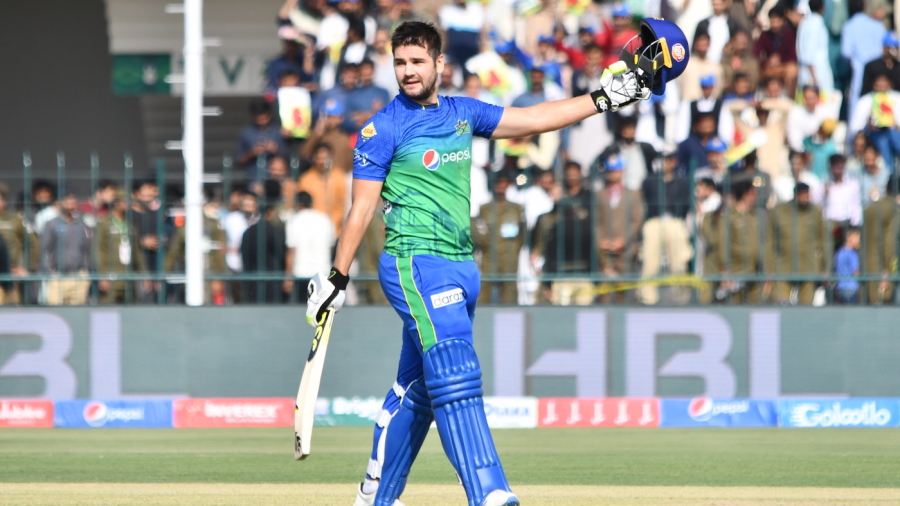 Whatever happened at the 10-over mark in the first innings, Multan Sultans need to patent. After a sluggish start from the hosts that saw them shuffle along to 65 in 10 overs, Rilee Rossouw caught fire all of a sudden, a stunning onslaught resulting in the fastest century in PSL history and an astonishing 134 runs in the final 10 overs that set Quetta Gladiators 200 to win, a target they fell short of by 31 runs.

Quetta, as you might expect, gave it as good a go as their capabilities might allow, with Shane Watson at one point looking like he might pull of a heist for his side. But Quetta’s cack-handedness with the ball and in the field left him and his team with far too much to do and much too little time. Even as the sixes flew, the asking rate continued to balloon, and once Watson was dismissed, Quetta’s fate was sealed.

The mood music at the start was worlds removed from its frenetic, run-heavy conclusion. Shan Masood became the first captain to opt to bat this season, and Quetta looked like they would make him regret that decision when Zeeshan Ashraf fell early and James Vince searched unsuccessfully for the sweet timing he is so coveted for. Mohammad Nawaz stifled the batsmen at the start, while Naseem Shah begun brightly.

All of that went to ruin after the halfway mark, though. The moment Rossouw biffed Anwar Ali for a six the first ball of the 11th over, Quetta lost their collective composure. You could count the number of times they hit their spots from that point onwards on one hand, and Rossouw capitalised on the chaos. Just one over between 11 and 18 went for fewer than 12 runs, and while Masood got some of his own hits in, it was all about Rossouw. He would bring up his hundred in the final over; it had taken just 43 balls, including 10 fours and half a dozen sixes.

Watson tried his best to match that, and batting alongside Jason Roy, brought up the 50 partnership in the sixth over. But soon after Roy holed out to deep midwicket, it quickly became clear this would be a one-person effort. That Watson took it as far as he did was achievement enough, and it isn’t often a 41-ball 80 is on the wrong side of a PSL result. But this was clearly Rossouw’s game, and Watson was merely playing in it.

Not many will come away from the game reminiscing about Masood’s 32-ball 46, and why would they, given what else just happened in that first innings? But the value of it becomes clear when you notice it was the one thing Quetta lacked in the chase. Rossouw had, in Masood, the perfect foil on the other end, with his captain ensuring he didn’t give his wicket away or hog too much of the strike. When Masood got the strike, he got away the odd boundary and turned it over quickly to the South African, neither heaping pressure on him nor starving him of the strike. Together, they put together a partnership that totalled 139 runs in 64 balls.

By contrast, Quetta managed no partnership greater than Roy and Watson’s 57 at the top, and no other Quetta batsman could even reach 15. That meant the pressure was squarely on Watson’s shoulders, further driving home the point if they were going to take it close, it was all on him. Other batsmen who had helped them win big games this season all failed, with Azam Khan falling early and Ben Cutting holing out for 12. The sort of innings Masood had played was absent from Sarfaraz Ahmed’s side, and it wasn’t a surprise to see the result pan out the way it did.

Star of the day

Rossouw and Watson may get the hundreds and entertain the fans most, but in a game where 200 was nearly scored and then changed, perhaps the most remarkable numbers were posted by Imran Tahir. While Watson and the rest of the Quetta top order ran riot, Tahir ensured the game wouldn’t run away from Multan. Varying his flight, pace and googly with all the experience any T20 side treasures in him, Tahir kept the Quetta batsmen guessing, and, even more importantly in such a high-scoring game, cautious.

It wasn’t like he had all the luck, either. In his third over, as Watson’s charge built up a crescendo, Tahir had him into skying a drive down to long-off, where Moeen Ali stood perched for a simple catch. Moeen somehow grassed the opportunity, but undeterred, Tahir dismissed Azam Khan the next ball. He wasn’t done with Watson, either, coming back the following over and coaxing a nearly identical shot from the batsman. This time, Moeen would make no mistake. In a game where scoring ten an over was the order of the day, Tahir’s figures of 4-0-27-2 didn’t flatter him in the slightest.

Multan surged at the top of the table, having swept all three games in their home city. They now have four wins in five, while Quetta sit just below them, with three wins from five matches.