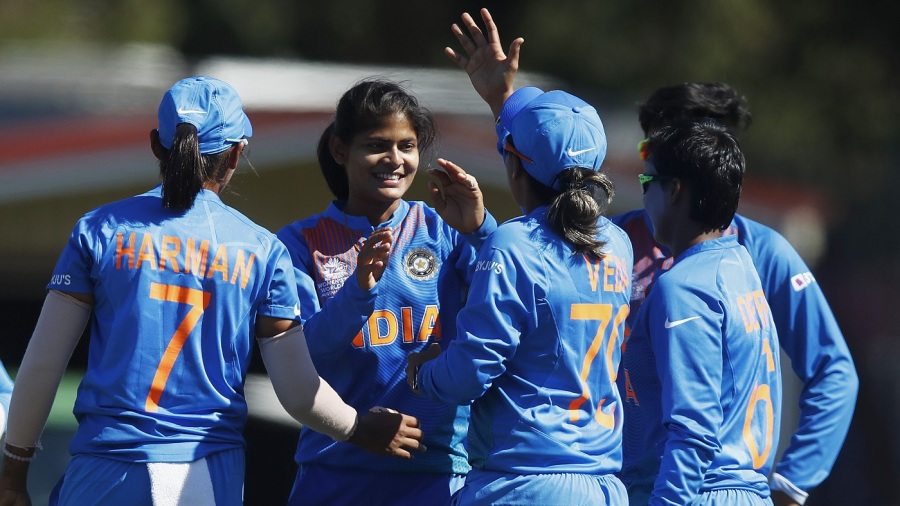 India’s spin bowlers strangled Sri Lanka, leaving an obligingly small target for Shafali Verma and her team-mates to run down and so take Harmanpreet Kaur’s team into the T20 World Cup semi-finals with an all-win record after the second of two matches at Junction Oval on Saturday.

Radha Yadav‘s career-best 4 for 23 was well supported by Rajeshwari Gayakwad, Poonam Yadav and Deepti Sharma on a slow surface that afforded variation in pace off the pitch if no extremes of turn, enough to prevent Sri Lanka from developing any momentum after the loss of their top-order talisman Chamari Atapattu.

Verma’s aggression quickly made the chase a matter of pageantry for the India-dominant crowd that had assembled at the ground, leaving Australia to play off against New Zealand on Monday for the right to join India in the final four from the group.

New Zealand’s successful defence of a meagre total in the early game had given an indication that the surface was not the easiest for batting and would get harder as the afternoon wore on. Sri Lanka duly batted first upon winning the toss, in the hope that Atapattu could guide them to a total sufficient to challenge India’s supremacy in the tournament thus far, with a bevy of spin bowlers waiting for their chance to impose the sort of pressure they had done on Australia in Perth.

For a time, it was all going according to plan. While not quite exploding out of the blocks, the Sri Lankans were decently placed at 42 for 1 after seven overs, and Atapattu found enough timing to reach the boundary five times while also clearing it once. Continued acceleration from that point might have brought a tally in the region of 140, more than enough to defend in the prevailing conditions.

However, Kaur’s side bowled with the confidence of a team undefeated in the tournament, not panicking when the early exchanges did not go their way. Harshitha Madavi’s dismissal, bowled between her pads by Gayakwad, was swiftly followed by a disastrous miscalculation from Atapattu, who swivelled to pull a short ball from Radha and could only pick out deep backward square-leg with unerring accuracy.

From there, the innings slid ever more steadily into the mire, as Radha collected her first four-wicket haul in T20Is, Gayakwad completed an exemplary spell, and Poonam Yadav twirled down another tantalising quartet of overs. In all, India’s spin bowlers returned figures of 16-1-77-8 between them, as it was only Shikha Pandey’s medium pace that was taken regularly for runs at a rate to Sri Lanka’s liking.

Given her penchant for punchy and match-defining innings, a chase for 114 to win was ideally suited to Verma, and she did not disappoint in maintaining an utterly fearless approach with the bat. Sri Lanka, as has been their problem throughout, were generous in spurning chances – one each from Verma and Smriti Mandhana – while a couple of other shots sailed a matter of centimetres beyond outstretched hands.

Verma capitalised by going on to her highest tally of the tournament, with her trend of 29, 39, 46 and now 47 before being run-out a highly promising one for India’s prospects at the pointy end. Kaur promoted herself to No. 3 and connected with a few blows that will help her regain some confidence after a run of outs – even if she only got as far as 15. In the end, the target was reached with 32 balls to spare.