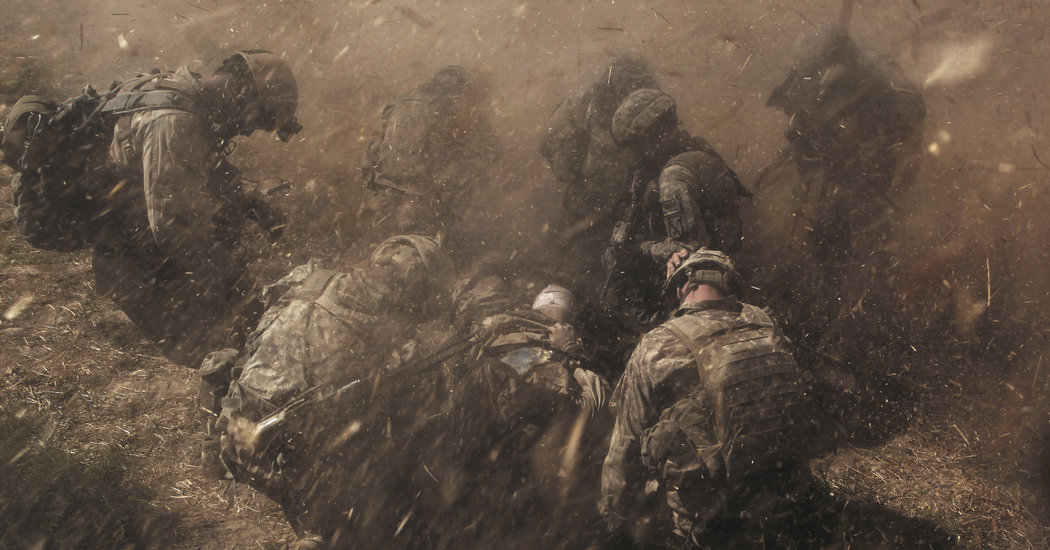 Photographs by The New York Times

Soon after the attacks of Sept. 11, 2001, the United States military’s attention turned to Afghanistan, where Al Qaeda’s leaders were based. Many knew an invasion was sure to come.

What no one knew was that Operation Enduring Freedom, the invasion to rout Al Qaeda and its hosts, the Taliban, would turn into a war that is now in its 19th year — America’s longest.

It has vexed three American presidencies and outlasted 13 American military commanders. It has also opened a window, for much of the world, onto a country where modernity still clashes with ancient customs and religious edicts.

Here, in chronological order, are images showing the long arc of the war, as seen through the eyes of New York Times photographers.

Operation Enduring Freedom began on Oct. 7, 2001, with an American bombing campaign against Al Qaeda and the Taliban. On the ground, American Special Operations forces teams linked up with Afghan militias opposed to the Taliban, mainly the Northern Alliance, to drive the Taliban from power. The capital, Kabul, fell in mid-November, along with the Taliban stronghold of Kandahar.

In December, Osama bin Laden, Al Qaeda’s leader, escaped to Pakistan through the mountains around Tora Bora. That same month, an interim Afghan government led by Hamid Karzai was installed.

Defense Secretary Donald Rumsfeld announced an end to major combat operations in Afghanistan in May 2003. Even with a major reconstruction effort underway there, and about 8,000 American troops in place, President George W. Bush’s administration began shifting combat resources to the war in Iraq.

In 2004, an Afghan assembly drafted a Constitution. Zalmay Khalilzad, then the American ambassador, said it contained “the foundation for democratic institutions.”

[Read a Times historical photo essay on past Afghan wars, The Empire Stopper.]

The Taliban-led insurgency grew stronger in 2006, carrying out more ambushes and suicide bombings. Despite training and equipment supplied by the United States and ISAF, Afghan security forces could not contain the Taliban resurgence, aided by militants across the border in Pakistan. The United States sent more of its soldiers to the war.

In February 2009, the new American president, Barack Obama, declared a recommitment to the war and deployed 17,000 more troops to Afghanistan, adding to the 36,000 already there.

In December, Mr. Obama announced a “surge” meant to build and train an Afghan security force that would be strong enough to assume responsibility for fighting the insurgency. His plan included sending 30,000 more American troops, bringing the total number to nearly 100,000 by mid-2010.

In May 2011, a U.S. Navy SEAL team killed Osama bin Laden in a compound in Abbottabad, Pakistan, where he had been living for years. In June, Mr. Obama announced that he would pull 33,000 troops from Afghanistan by mid-2012.

Afghans took over most security responsibilities in 2013, with the U.S.-led coalition’s forces shifting to training and counterterrorism operations.

On Dec. 31, 2014, the combat mission in Afghanistan formally ended, but the American military presence in the country did not. Mr. Obama announced a timetable for the withdrawal of most troops by the end of 2016.

After a 2014 election marred by fraud, Ashraf Ghani became president, but he signed a power-sharing agreement with his top opponent, Abdullah Abdullah.

On the battlefield, the Afghan security forces increasingly struggled against the Taliban taking heavy casualties and losing territory.

In August 2017, President Trump said that while his first instinct had been to withdraw all troops from Afghanistan, he would continue to prosecute the war. He stressed that withdrawal decisions would be based on combat conditions, not on predetermined timelines.

Peace Talks and a Historic Deal

Late in 2018, American and Taliban negotiators began holding peace talks. The discussions continued well into 2020, in Doha, Qatar. (The Afghan government was excluded from the talks — the Taliban refused to meet with its officials.)

On Feb. 29, the United States signed a peace deal with the Taliban, opening the door to a gradual, final troop withdrawal from Afghanistan, and the beginning of direct talks between the Afghan government and the insurgency to determine the country’s future.

As of February, about 12,000 American troops were still in the country.

The United States has spent more than $2 trillion on the war effort. More than 2,400 American troops and nearly 700 troops from other nations in the coalition have died. More than 38,000 civilians have been killed, and among the Afghan security forces, about 60,000 are estimated to have died since the start of the war.