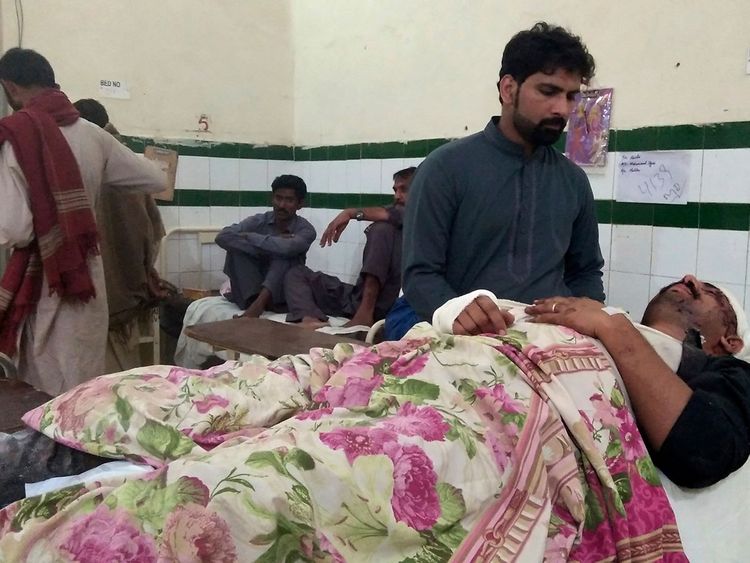 Islamabad: After Friday’s collision between a passenger train and a public transport bus, train services remained suspended for hours on the Sindh-Punjab track on Saturday.

The collision was so strong that it ripped the bus apart, killing at least 20 passengers including women and children and injuring several others.

This was the first major train accident of 2020.

The incident took place in Sindh, near Rohri at an ‘unmanned’ railway crossing, and refreshed bitter memories of last year’s train inferno and other accidents that claimed more than 100 lives.

Three coaches on a Tezgam train near Liaquatpur city caught fire and 73 people lost their lives. About 40 others, including women and children, were injured in that horrible incident.

At the time when the accident took place on Friday, Minister for Railway Sheikh Rashid Ahmed was addressing a press conference and making fun of his political rivals, including chairman of the Pakistan People’s Party (PPP) Bilawal Bhutto Zardari and Pakistan Muslim League-Nawaz leader Nawaz Sharif, in Faisalabad city.

During the press conference when the minister’s attention was drawn to a Rs5 increase in train fares under the passengers’ insurance scheme, he expressed ignorance.

Later, in a statement Sheikh Rashid Ahmed passed the buck to the provincial government of Sindh and said it was the Sindh government’s duty to put up a barrier at the railway crossing.

Despite Rashid’s explanation, he came under severe criticism for “bringing the railway to this present dismal situation” and many people, including public representatives, were expressing their anger on social media.

Former Senator and leader of the Pakistan People’s Party Enver Baig in a tweet addressed Prime Minister Imran Khan and asked him how many more lives would be lost in train accidents.

In his post, Ener Baig asked the prime minister, “H’ble PM : how many more lives u want to take.? or do you relish a comedian minister in the cabinet.Enough is enough ur reputation is at stake, just throw him out.”

Ali Dar, son of former Finance Minister Ishaq Dar also tweeted on the terrible accident and asked the authorities to stop issuing ‘hollow sympathies’ with the victims and do some solid measures.

Presently, administrative chaos and operational mismanagement have completely marred the affairs of the train service that is used by around 6 million passengers annually (daily around 180,000).

MAJOR TRAIN ACCIDENTS THAT TOOK PLACE DURING UNDER PRESENT GOVERNMENT:

(1) Sept 16, 2018: Khushhal Khan Khattak Express on its way to Peshawar when some of the train’s carriages derailed between the Masaan and Sohan railway stations, injuring 21 passengers.
(2) April 1, 2019: More than eight bogies of a freight train derailed near Chak 75/P, about 12km from Rahim Yar Khan. Railway traffic remained suspended for hours on both tracks after the accident.
(3) April 10, 2019: Bahauddin Zakariya Express derailed at Mehrabpur Junction, Naushahro Feroze Sindh injuring dozens of passengers.
(4) May 27, 2019: A woman died while 4 sustained severe wounds as speeding train crushed rickshaw and motorcycle in Lahore. The accident took place at Kot Lakhpat railway crossing.
(5) June 20, 2019: Three people lost their lives when a passenger train collided with a freight train at Makli Shah, Hyderabad Sindh.
(6) July 11, 2019: At least 16 people died while 84 were injured when a passenger train, the Akbar Express, collided with a freight train at the Walhar Railway Station in Sadiqabad.
(7) October 31, 2019: At least 65 died and dozens were injured when three compartments of a Tezgam train caught fire near Liaquatpur City in District Rahim Yar Khan.