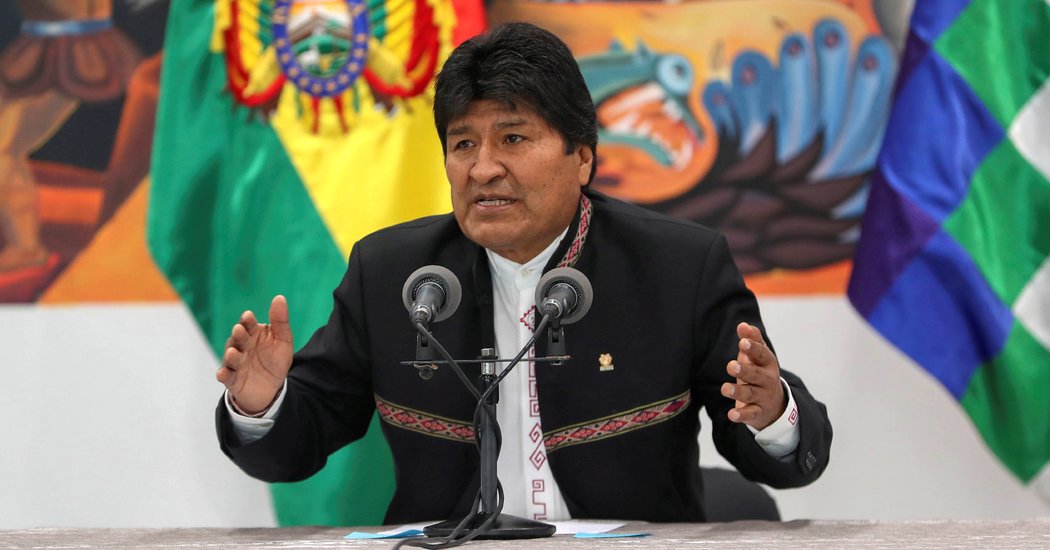 BOGOTÁ, Colombia — Researchers from the Massachusetts Institute of Technology have cast doubt on a claim that Bolivian officials engaged in fraud to help Evo Morales, the longtime president, win re-election.

The researchers, while not definitively ruling out the possibility of any fraud, waded into a fierce domestic and international debate over Mr. Morales’s legitimacy. The country’s first Indigenous president, he was a historic but contentious figure, forced out in November after violent protests and accusations that his allies had rigged the election.

“The statistical evidence does not support the claim of fraud,” the researchers, John Curiel and Jack R. Williams, wrote in The Washington Post. Their work was commissioned by a group called the Center for Economic and Policy Research, which has been supportive of left-leaning governments in South America.

Mr. Curiel and Mr. Williams, from M.I.T.’s Election Data and Science Lab, said they were contracted to conduct an independent analysis.

Their assessment met with scathing criticism from the Organization of American States, which conducted an initial audit in late 2019 that found Bolivian officials had engaged in lies, manipulation and forgery to ensure Mr. Morales’s victory.

The O.A.S. said it stood by its findings.

“It defies all logic that individuals that hold themselves out as ‘scientists’ and ‘specialists in election integrity’ would engage in such flawed analysis,” wrote Gonzalo Koncke, an O.A.S. official, in a letter to The Post.

The researchers’ work did not address many of the allegations mentioned in the O.A.S. report, including the accusation that Bolivian officials maintained hidden servers that could have permitted the alteration of results.

Instead, the researchers examined one allegation made by O.A.S. auditors: that differences in results reported before and after a pause in the initial vote count pointed to evidence of fraud in favor of Mr. Morales.

But the researchers concluded that such a change was entirely plausible. “There does not seem to be a statistically significant difference in the margin before and after the halt of the preliminary vote,” they wrote.

They pointed out that voting trends often shift as votes are counted. In the United States, for example, votes that come in after Election Day tend to favor Democratic candidates.

The fraud claims have been central to a debate about whether Mr. Morales should be able to return to political life in Bolivia — and whether his party, Movement Toward Socialism, should get another shot at national leadership.

In early May, Bolivians will vote again for a new president. Mr. Morales can’t run; he is in exile in Argentina and faces criminal charges at home. But his candidate, Luis Arce, is leading in the polls.

In an email, Mr. Curiel called for further analysis of the fraud claims, noting that the O.A.S. came to its conclusions “on a quick turnaround,” just days after the election.