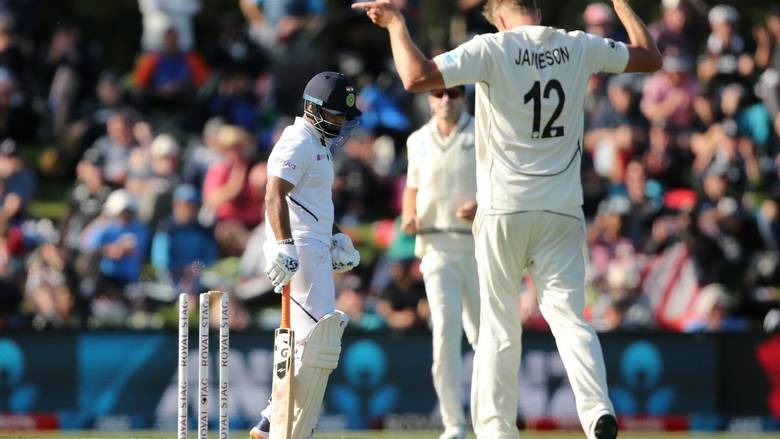 New Zealand dismissed India for 242 in the first innings

Seamer Kyle Jamieson took five for 45 as New Zealand dismissed India for 242 after tea on day one of the second and final Test on Saturday before consolidating their advantage by reaching the close of play on 63 without loss.
Playing only his second Test after making his debut in the 10-wicket victory in Wellington last week, the tall right-armer wreaked havoc in India’s lower order as the tourists lost their last five wickets for 45 runs after the second break.
Jamieson, enjoying some of the luck that had evaded him earlier in the day, claimed four of those wickets after starting with Cheteshwar Pujara, who had threatened to guide the tourists to a more than competitive total.
Pujara, picking his shots with the care of a player who knew how important his innings would be, ground out a 25th Test half century and enjoyed a partnership of 81 with Hanuma Vihari that had India looking comfortable at 194-4 just before tea.
Vihari gloved behind for 55 to bring up the break, however, and Pujara was gone for 54 two overs after the resumption when he abandoned his circumspection and skied an attempted hook that wicketkeeper BJ Watling took with ease.
“It was a wrong time to get out obviously, just before tea,” Vihari told reporters. “I was batting positively, I thought I played one shot too many.
“But that’s the name of the game, sometimes it goes your way and sometimes it doesn’t.”
Jamieson then removed Rishabh Pant, Umesh Yadav and Ravindra Jadeja in short order and left Trent Boult to mop up the final wicket by bowling Mohammed Shami for 12.
“It’s a pretty special feeling,” Jamieson said after carrying the ball off the field.
“I think as a bowling unit we did so well and I was lucky to grab a few. At one stage I thought they were probably going to get a few more, (the wicket) wasn’t doing quite as much as it did in Wellington, so to keep them to 240 is pretty good.”
The day started poorly for the tourists when New Zealand skipper Kane Williamson won the toss and sent his five-pronged seam attack out to bowl on a green track.
Opener Prithvi Shaw provided the first bright moments of the day for the Indian supporters with a quickfire half century in the rain-delayed first session that presented a stark contrast to what was to come from Pujara.
Jamieson dismissed the 20-year-old caught behind for 54, though, and his opening partner Mayank Agarwal (7) was also sent back before the first break.
Skipper Virat Kohli’s batting woes continued as he was trapped plumb in front by Tim Southee for three from the first ball he faced after lunch to take his tally to a paltry 24 from his three innings in the series.
New Zealand openers Tom Latham, who was unbeaten on 27, and Tom Blundell (29 not out) successfully negotiated 23 overs until stumps and will resume on Sunday looking to cut deep into India’s 179-run lead.