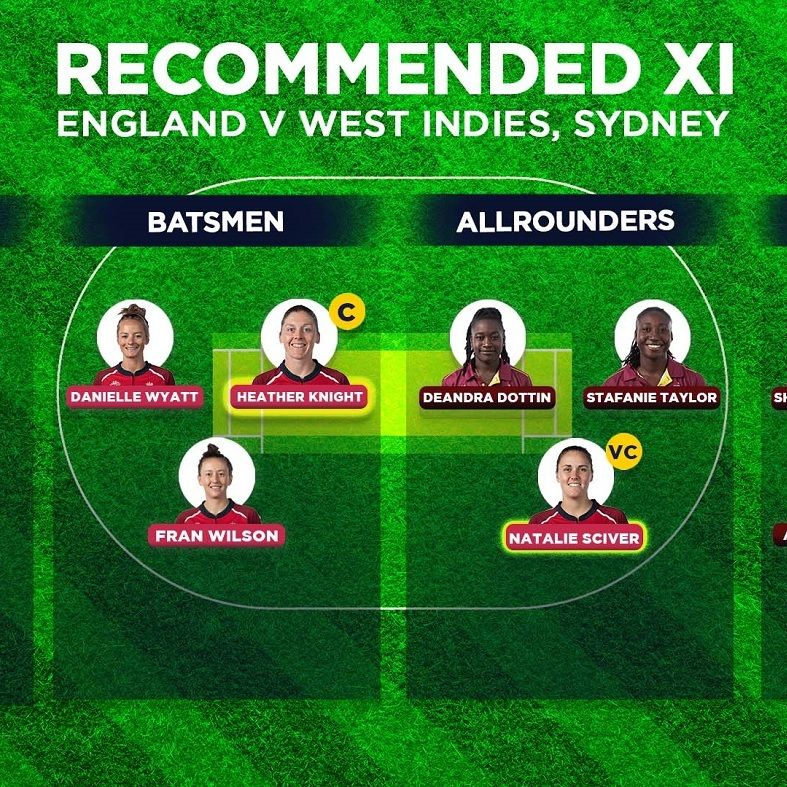 Knight’s form makes her the obvious choice for captain. She has now had five 40-plus scores in her last eight T20I innings and that includes three half-centuries and a century.

Sciver has been Miss Consistency in the tournament so far, with two fifties and a 36 in the three innings. On form and against a demoralised West Indies, you should back her as your vice-captain, or even your captain.

Sophie Ecclestone: Ecclestone has continued to impress with the ball. She has picked up five wickets so far at an economy rate of 3.5, that last number the best overall at the moment.

Deandra Dottin: Dottin has looked slightly out of sorts since her return from injury. She will be looking to turn it around as well as West Indies’ fortunes this game. She has scored 292 runs against England in the format over the years at a strike rate of 121.66.

Stafanie Taylor: We are backing the West Indies captain to come up with the goods. She has scored 69 runs in the two games and picked up four wickets as well and is almost guaranteed to get you some points from somewhere. Her batting average against England in T20Is is 30.53.

Sarah Glenn: Glenn spun a web around Pakistan in the last game, picking up 3 for 15. West Indies score only at 5.60 against spin and that makes Glenn a valuable pick.

Danielle Wyatt: Wyatt found some form against Pakistan but was dismissed for 16, adding to her string of low scores. But she is one of the best in the business, with two hundreds and seven fifties and a career strike rate of 123.43. The last time these two teams faced off, she scored a 55-ball 81.