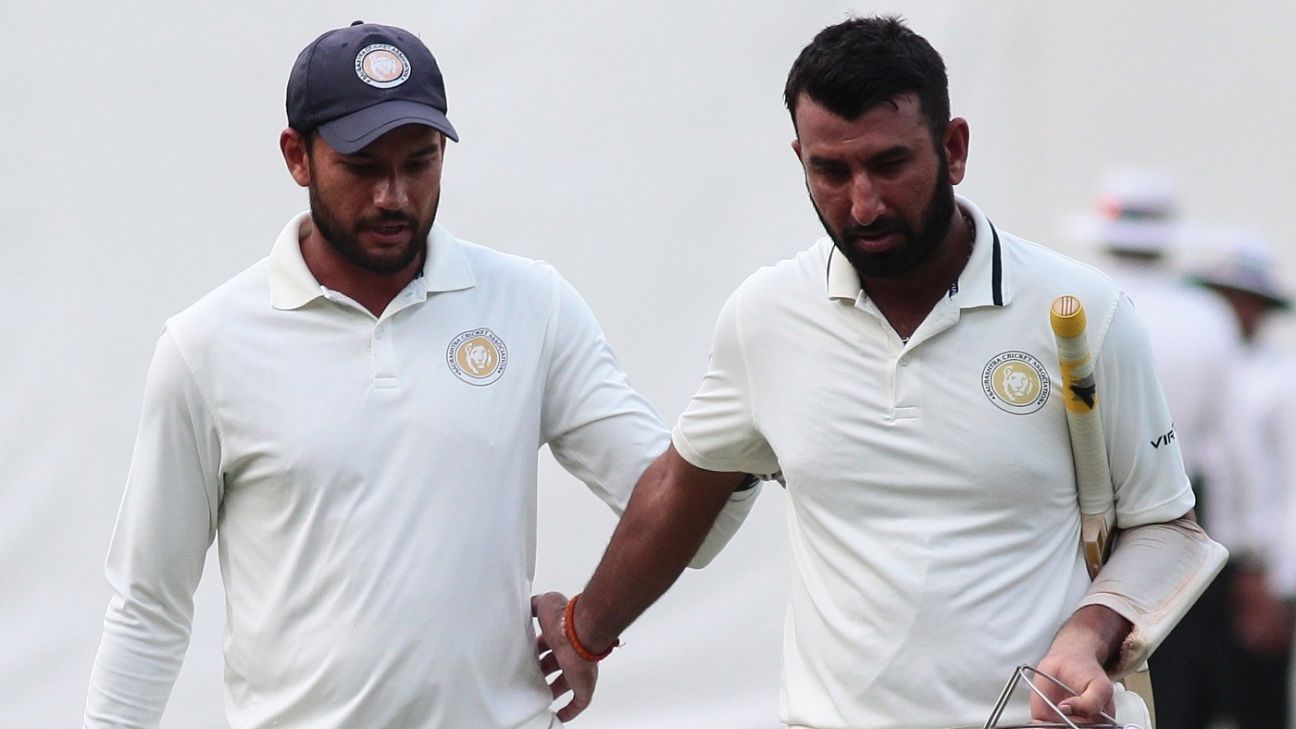 Saurashtra will miss Cheteshwar Pujara‘s batting prowess during their Ranji Trophy semi-final against Gujarat, but his cricketing know-how is still very much with his domestic side.

Despite being in New Zealand, Pujara has been in constant touch with Saurashtra captain Jaydev Unadkat, providing inputs about the pitch and the team combination.

“Cheteshwar has been carrying this team as much as I have been,” Unadkat said on the eve of the semi-final. “He was there with us for the first five-six games this season which was good. I have been in constant touch with him regarding how the team is doing, and he has also been asking me about things from there [New Zealand]. I had a word with him the last night for that matter, about how the pitch is and what the team composition should be going into this game. So he is very much in touch, and he does care a lot about this team and I am just happy that he is as much passionate for this team as we all are.”

Pujara was instrumental in taking Saurashtra to the final last season. His unbeaten 67 against Uttar Pradesh in the quarter-finals helped Saurashtra pull off a record chase. Then in the semi-finals, he scored 45 and 131 not out against Karnataka to give his side a shot at the title. However, they faltered against defending champions Vidarbha in the final, making it their second defeat in the final in the last four years.

Unadkat, however, believes the current bunch will win a maiden Ranji title for Saurashtra in the next couple of years, if not now. “The one thing that I have been telling my team, and I would like to make it public now, is that I have told these guys that this is the group of players that is going to win the trophy for Saurashtra, be it this year, be it the next year, or two years from now. This is the group that’s gonna win the trophy.

“What I tell the guys is not to take the added pressure just because we have lost a couple of finals, and what if we don’t win another final. Obviously, we are still one game away from the final, and I have been saying it’s one game at a time now, in the knockouts especially. Even if we reach the final, that will remain the same. I will tell the guys that we are already doing things we should be proud of as a team. It doesn’t really matter if we falter in one game. Obviously, I am as hungry as anyone else to win the trophy but having said that I am pretty much sure this group of players will do it at some point for Saurashtra if not now.”

The immediate hurdle for Saurashtra though is Gujarat, who had topped the combined Elite A and B groups and have been unbeaten so far. But, according to Unadkat, if his side can keep playing the way they have been, the can beat any side.

“I believe on paper both teams are equally strong,” Unadkat said. “At the same time, it’s how we have played our cricket in the last two seasons, the brand of cricket we have played is something I am proud of and we continue that, I don’t think we cannot not beat any team, be this team or any other team.”

Unadkat himself has been in great form this season and is currently the joint-leading wicket-taker in the tournament with 55 wickets at an average of 11.80 and a strike rate of 25.2. While that gives an impression it has been a one-man show, Unadkat clarified that’s not the case.

“There has to be one strike bowler in the team who should be leading the attack,” Unadkat said. “It was Dhamendra[sinh Jadeja] doing it last year for us, and I have been doing that this season. I was doing well last season as well, that’s why we were bowling in tandem, which wasn’t the case this year but I still believe the way Prerak [Mankad] and Chirag [Jani] have bowled this season – they have 30 [32] wickets combined if not more than that – so I think they are supporting me well.

“It’s my responsibility as a strike bowler that whenever the team requires, I provide the breakthroughs. This has happened two-three times this season that I have been able to do it and win the games. That’s why my performance is more visible this time. As far as my bowling is concerned, I am in a great mental space right now. I am not really worried about my own performance, I just want this team to win and I want to contribute to that. Side by side if I am taking wickets, that’s good for the team and for me as well. So I am just happy how things are going.”