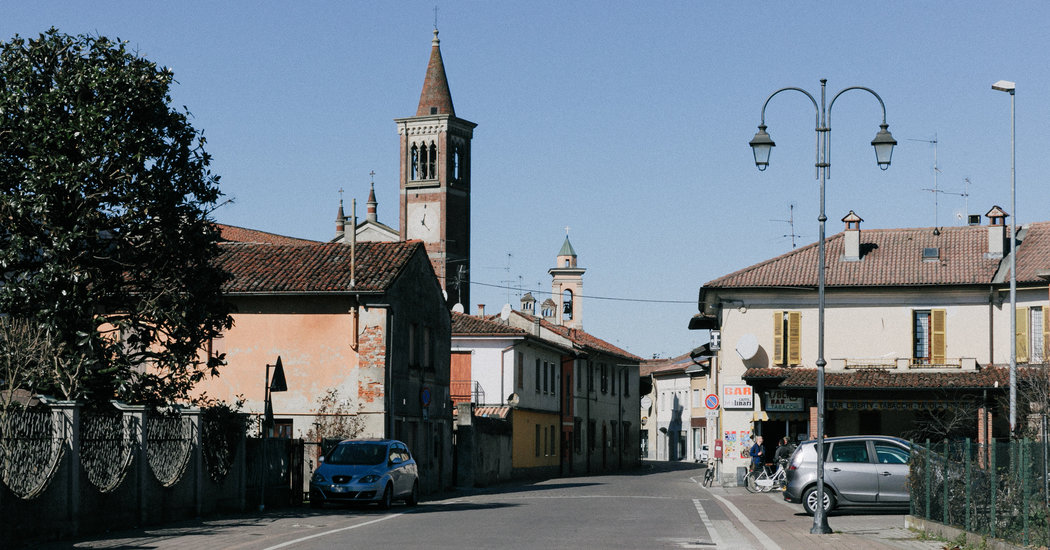 SECUGNAGO, Italy — The phone call came from inside one of the northern Italian towns quarantined to contain the rapid spread of the coronavirus.

“Did you get the focaccia?” Tina Pomati, 65, asked her daughter, who was preparing to move a paper bag loaded with Rothmans Blue cigarettes, salami and chocolate cordials across an invisible border and into the Lombardy region’s forbidden “red area.”

“I’m almost there,” her daughter, Alessandra Paladini, 46, said. A few minutes later, she pulled up to a checkpoint outside the town of Zorlesco guarded by stern police. Her mother stood eagerly across the divide as the officers, wearing masks and white gloves, brusquely took the care package and handed it to her mother. The two women blew kisses at one another.

Northern Italy has taken an aggressive response to the spread of the virus, testing and quarantining people with and without symptoms, locking down 11 towns and more than 50,000 people as officials desperately seek to seal the virus off from the rest of the Italy.

But as the burden of the crisis weighed on Lombardy, the measures in the region have also divided families, damaged businesses and created the sense that Italy is sacrificing the few to protect the many, just as some countries around the world are trying to protect themselves from Italy.

As the virus spreads, the situation inside the locked-down towns and on the ambiguous — and sometimes porous — borders between the free and the quarantined offers a potential preview of what may come if countries, including the United States, choose to confront the virus with a similar hard line.

“They sacrificed us,” said Monica Grandi, 33, who works in a butcher shop outside the red zone and who walked with her toddler on the quarantined side of the border, where the family lives. She said the country looked upon them as infected pariahs. It made no sense that the neighboring town “a stone’s throw away” wasn’t locked down. “Why us and not them?”

After the first outbreak of cases, Lombardy officials on Sunday locked down 10 towns south of Milan and started testing locals who reported contact with the infected, whether or not they suffered symptoms.

Lombardy officials said on Friday that 531 people had contracted the virus but fewer than half, 235, required hospitalization. Of those, 85 required intensive care. On Friday officials said quarantines would be extended for another week to contain the virus.

Health authorities in Rome argued that the aggressive testing in Lombardy violated international guidelines that only people showing symptoms should be tested, and thus inflated numbers and the perception of the threat. The broad testing, and resulting high numbers of people infected with the virus but without symptoms, have burdened the health system.

If the virus spreads as it has, with each contagious person infecting two other people, the hospitals “will go into grave crisis,” a statement from the Lombardy region said. All nonemergency surgery and medical exams have been postponed. Doctors complained of a shortage of masks and gloves, according to Massimo Vajani, president of the Medical Association of Lodi, the provincial capital, where many red zone patients have been transferred.

In recent days, national officials have sought to downplay the threat, blaming the press and arguing that the virus hit only a tiny fraction of the population. Lombardy has since limited its testing only to people with symptoms.

Those without symptoms in the red zones said the suspension of testing added insult to injury.

“They have abandoned us here, infecting each other,” said Michela Torresani, a 36-year-old payroll worker who is under quarantine. She said the lack of tests created more doubt and anxiety. Out of precaution, she said, she had decided to avoid her elderly parents. “It’s too risky,” she said.

Italy’s economy has suffered too.

Millions of tourists have canceled trips to Italy, and the State Department has advised Americans to reconsider going there. The head of the Bank of Italy, Ignazio Visco, this week estimated the impact of the coronavirus on Italy’s already-slumping economy to be around 0.2 percent of the G.D.P.

Lombardy is the industrial heart of Italy, and the plains surrounding the locked-down towns are home to 3,000 companies. Every day of quarantine results in a loss of 50 million euros for the local economy according to Sabrina Baronio, head of the area’s local business organization.

She said that the government had treated the area like a “lab rat” and that the experiment should not be repeated elsewhere. “Maybe we won’t have many deaths for coronavirus but we will assist the funeral of our companies.”

On Friday night, the Italian government announced new measures — a mix of tax breaks and other aid — to offer relief to the local economy. But local businesses said the quarantine had already taken its toll.

“It’s a huge disaster,” said Taylan Arslan, 33, who had scheduled the opening of a new kebab-making plant in the area on Monday. But his 57 employees could not enter the warehouse. He estimated that he had lost 12,000 euros for each of the five days he did not work and worried that “people are going to label us as dangerous.”

Carlo Benuzzi, 56, said his clothes shop had been closed since Sunday.

“We are blocked here,” he said, arguing that if the same rigorous checks were done elsewhere, most of the world would be locked down. Mr. Benuzzi led a long-distance running team that included the 38-year-old Unilever employee whom officials have identified as responsible for spreading many of the early coronavirus infections.

“Now when I go running in the fields,” Mr. Benuzzi said, “I see members of the army. It looks like West Berlin and East Berlin.”

On Friday, ambulances driven by medical workers in white hazmat suits raced, sirens blaring, in and out of the locked-down town of Zorlesco. (“If you continue to allow ambulances to go back and forth from quarantined towns the virus can still spread,” Dr. Vajani said in a telephone interview.) A funeral home’s van rolled in slowly.

At the checkpoint, Marco Ausonio, 54, complained that his washing machine had broken and handed a white bag of laundry to a financial police officer, who walked it over to his brother who had come from the free zone.

Experts at the World Health Organization said the risks from laundry would be small but could be higher from “an infected patient.” Massimo Andreoni, an infectious disease specialist at Rome’s University of Tor Vergata, said he considered the risk nil, but added, “A person in a quarantined area probably shouldn’t be exchanging things with someone outside.”

The area is rife with other small inconveniences. The shortage of grocery items had led some people in the town to order deliveries from the Esselunga supermarket. But when the store’s driver, Secrieru Veaceslav, approached the checkpoint he stopped short.

Less than a mile back down the road, regulars drank wine and beer at the Liberty Bar in Secugnago. The cafe had become the go-to store for cigarettes after the local tobacco shop closed, as its owner lives in a quarantined area. Inside the bar, the men debated the contagion level of the virus and whether the threat had been exaggerated.

Outside, they gathered around a phone and laughed at how newscasters failed to pronounce the name of their town. None of them wore masks.

Maurizio Pedrinazzi, a 60-year-old street cleaner, said it was “absurd” that their town was open while neighboring Zorlesco remained closed. If the virus spread so quickly, he said with a shrug, then it was likely “everyone is contaminated.”

Plus, he said, despite the quarantine, people from the locked-down town often stopped in for a drink.

“They know the country roads, the shortcuts,” he said. “They all come here.”

The quarantine border in fact seemed less than air tight.

At the checkpoint, the police stopped a woman walking briskly in jogging clothes. She said she wanted to get back into the quarantined town after taking her morning constitutional.

“You know there is an ordinance?” the officer asked incredulously — before granting her request.

After Ms. Paladini delivered the care package for her mother, her mother expressed her gratitude for the focaccia.

“When you can’t have something,” she said, “you want it even more.”