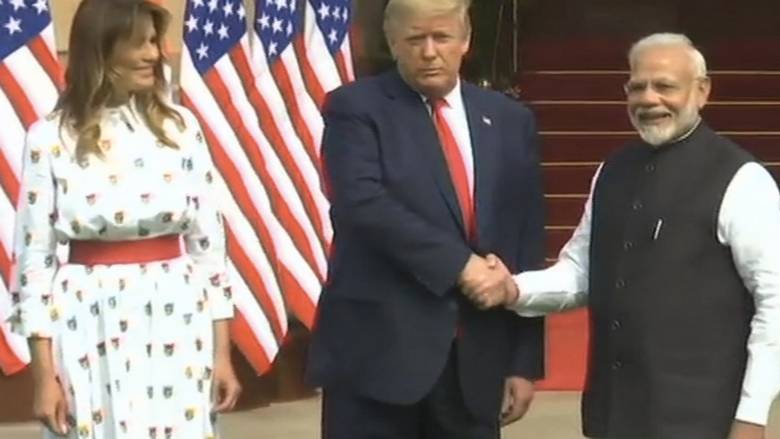 Indian Prime Minister Narendra Modi and United States President Donald Trump met at the Hyderabad House  on Tuesday and posed for a handshake, with the iconic building decked up with flags of the two countries.

Trump is accompanying a 12 member delegation during his two-day maiden official visit to India.

On Monday, the US President, while addressing the ‘Namaste Trump’ mega event at the Motera Stadium in Ahmedabad announced that his country will sign deals with India worth USD 3 billion for the supply of choppers to the Indian military.

At a press briefing in New Delhi last week, External Affairs Ministry spokesperson had informed that New Delhi and Washington are eyeing at around five Memorandum of Understanding (MoU) in the areas of intellectual property, trade facilitation, and homeland security, among others.

Earlier today, the US President received a ceremonial welcome at the Rashtrapati Bhavan in the national capital in the presence of ministers holding several portfolios. Trump, along with his wife Melania, then paid floral tribute at the samadhi of Mahatma Gandhi in Rajghat. )