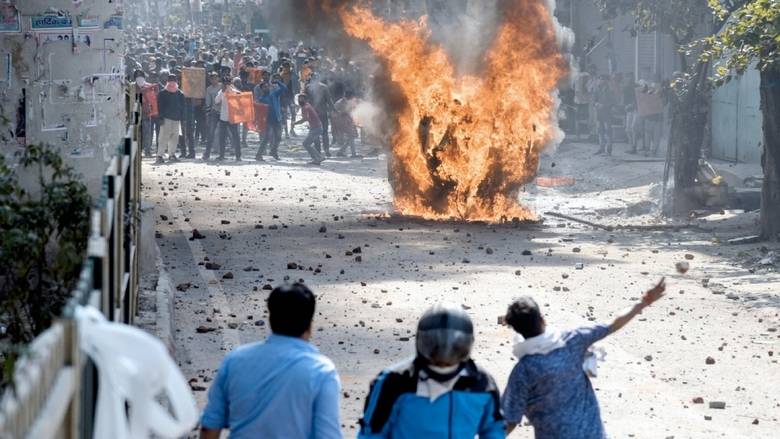 Delhi Police stated that the “situation is very tense.”

At least seven people, including a police officer, were killed and dozens were injured in clashes between hundreds of supporters and opponents of a new citizenship law in India that provides fast-track naturalisation for some foreign-born religious minorities, police said on Tuesday.

The clashes occurred in New Delhi on Monday, a day before President Donald Trump was to visit the capital. The violence took place as Trump was being feted by Indian Prime Minister Narendra Modi in the western Indian city of Ahmedabad.

There were no protests in New Delhi on Tuesday, when Modi was hosting Trump in the capital for the official portion of his visit to India.

During Monday’s protests, police fired tear gas and used canes as they charged at the protesters in several districts of New Delhi. The rival groups hurled rocks at each other in the area and set some houses, shops, vehicles and a gasoline pump on fire. Police closed access to two metro stations in the area.

US President Donald Trump will have a packed schedule on Tuesday in Delhi, where he arrived on Monday evening on the last leg of his India visit.

Trump, accompanied by First Lady Melania Trump, laid a wreath at the memorial and also observed one minute of silence. US president, a short while ago, was accorded a ceremonial welcome at the Rashtrapati Bhavan.

On Monday, the US President had addressed the ‘Namaste Trump’ event at Ahmedabad’s Motera Stadium along with Modi, where both the leaders had hailed the growing ties between the two countries.

The US President and his wife Melania Trump later visited the Taj Mahal in Agra. Trump will depart for the US tonight.

All schools to remain closed

All schools in northeast Delhi will remain closed on Tuesday after after violence in the area intensified on Monday.

As per the information, exams for class 12 in four vocational subjects in 18 centres in west Delhi will be conducted as per schedule, as there are no centres in the northeast Delhi for this exam.

The Delhi government demanded the suspension of the board examinations in the schools in these areas. In addition to the 10th and 12th board exams, the school examinations up to class 11 have been postponed as of now.

After the violence following the clashes between pro and anti-CAA groups on Sunday intensified on Monday, Deputy Chief Minister Manish Sisodia said there will be no school home examinations on Tuesday in the violence-hit areas and all government and private schools will remain closed.

However, the board exams of class 10 and 12 are beyond the control of Delhi government.

The Delhi government is concerned over the first board exam – English – of class 10 scheduled for Wednesday.