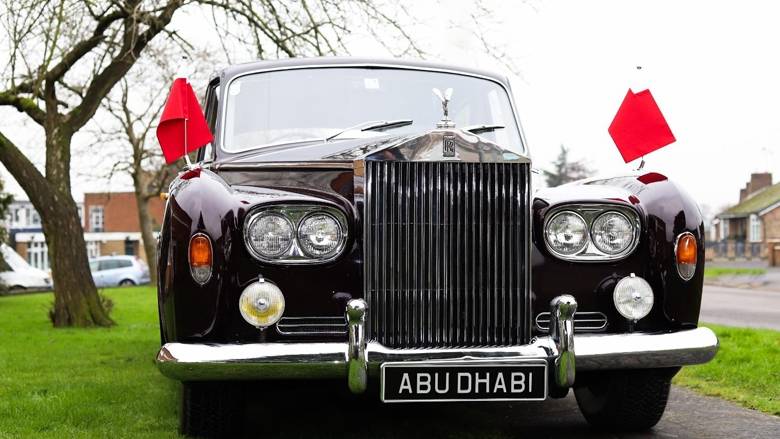 The car was used by the late Sheikh Zayed bin Sultan Al Nahyan, founding father of the UAE.

While the UAE is on a march with a futuristic vision ‘towards the next 50’, an Abu Dhabi resident has gone back in history to return with the first official state motor car – a national automotive treasure for posterity. The royal car which served the Rulers, was part of glorious ceremonies, including the UAE formation day of December 2, 1971, and the visit of Queen Elizabeth II in 1979. Mohammed Luqman Ali Khan, an author, motoring historian and vintage car lover, has made what is being termed as the ‘discovery of the decade’.

“It was a near improbable quest for me but I finally found Rolls Royce Phantom V (Chassis no. 5VE15) in a quaint suburb of Vienna, Austria. The car was used by the late Sheikh Zayed bin Sultan Al Nahyan, founding father of the UAE. In one of the pictures, Sheikh Zayed is seen in this car with sons, His Highness Sheikh Mohamed bin Zayed Al Nahyan, Crown Prince of Abu Dhabi and Deputy Supreme Commander of the UAE Armed Forces; Sheikh Sultan bin Zayed and Sheikh Hamdan bin Zayed.”

How the journey started

“In the summer of 2018, the Year of Zayed, I was researching for my book Automobiles of Sheikh Zayed. And while flipping through the Memoirs of the Emirates published by the National Archives of UAE, I stumbled on an Eastman colour photograph on page 333 showing the unloading of a classic Rolls-Royce on an Arabian shore.”

Fascinated by a right-hand drive, seven-seater Rolls-Royce, Khan later found it to be the most important motor car for the UAE.

“The feeling was of shock, bordering disbelief. It is not often that you discover official state motor cars, and rarer still, to learn it is the most important motor car in the history of the UAE.”

The ardent researcher also known as ‘Vintage Khan’ would then trace the Phantom’s footprints in the UK, France, the Netherlands and Austria.

“And then I was on the trail. I finally located the prized possession. Initially, I contacted the owner without much success. I persisted for a year and persuaded the owner. I flew down to Vienna to identify and inspect the car up-close. I took a test drive on February 19, 2019. It was an amazing feeling. I had accomplished my mission to find the UAE’s most cherished automotive heritage and motoring heirloom. This was the first and only Rolls-Royce Phantom V delivered to the UAE.”

The discovery is now the subject of his pictorial book titled Sheikh Zayed’s Rolls-Royce 5VE15. Khan is also making a video documentary on the car. “The book is my tribute not just to a priceless and historic car but also to the legend Sheikh Zayed. The book is planned for release later this year.”

Khan noted that the automotive masterpiece is intrinsically linked to the history of the UAE. “After exhibiting at the 1965 Earl’s Court Motor Show in London, the car was purchased from Jack Barclays and in January 1966 it was delivered to Sheikh Shakhbut bin Sultan Al Nahyan, the then Ruler of Abu Dhabi. It was then used during the reign of Sheikh Zayed, which started on August 6, 1966. Reportedly, A.A. Zayani – the Rolls-Royce dealer in the region – helped maintain the car.”

Khan hopes to showcase the UAE’s motoring heritage during Expo 2020 and wishes to photograph it at Qasr Al Hosn – the original home of the car where it was delivered new, along with a photo session at Qasr Al Watan. “I will have the motor car coming here for a few weeks from the UK. If permitted, I wish to recreate the scenes from yesteryears. This is the most perfect time to showcase this car, as the nation is gearing to celebrate the 50th anniversary of the formation of the UAE in 2021. I wish to exhibit this at major motoring shows around the world.”

Khan plans to unearth further details of this fabled car.

“While it remains unclear when and how the car left the UAE, reportedly back in the 1970s, I plan to research this on my next visit to England – the home of Rolls-Royce archives.”