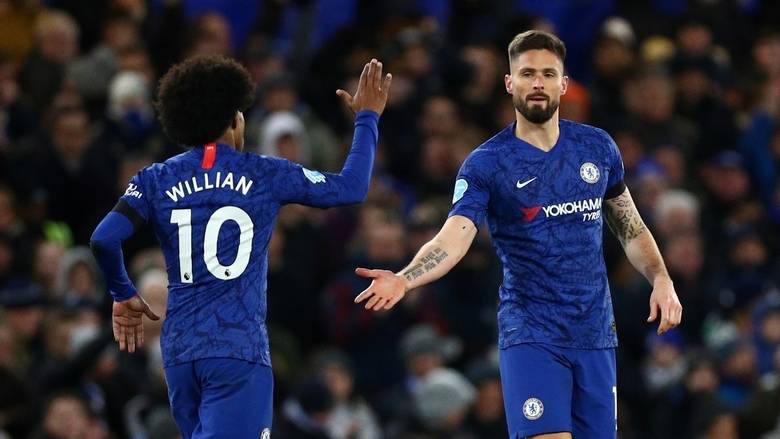 London derby between Chelsea and Tottenham is a feisty occasion

All eyes will be on Stamford Bridge and the Emirates Stadium in the Premier League this weekend as the battle to qualify for next season’s Champions League heats up, while runaway leaders Liverpool can take another step towards the title.
With the league’s first winter break done and dusted, it is full steam ahead for the clubs fighting to secure the lucrative Champions League berths behind champions-elect Liverpool.
Any London derby between Chelsea and Tottenham is a feisty occasion, but there is an extra spice to the rivals’ latest meeting as they are in direct competition for a European place.
Fourth placed Chelsea are just one point ahead of fifth placed Tottenham and a victory for Jose Mourinho’s men would take them above his former club.
Chelsea are reeling from a lacklustre 2-0 home defeat against Manchester United on Monday, but injury-hit Tottenham were beaten 1-0 by Leipzig in the Champions League last 16 first leg on Wednesday.
Hampered by their continued failure to turn possession in tangible rewards, Chelsea have won one of their last six league games, and none of their last four, leading to reports Blues boss Frank Lampard might find his position under scrutiny if they don’t qualify for the Champions League.
Lampard’s decision to drop Kepa Arrizabalaga for the last three games is said to have frustrated the Chelsea hierarchy, who made the Spaniard the world’s most expensive goalkeeper less than two years ago.
It is the kind of delicate and potentially damaging issue Mourinho had plenty of experience negotiating during his two spells as Chelsea manager.
There is respect between Mourinho and Lampard from their successful time together at Chelsea, but sympathy will be in short supply this weekend given what is at stake for both men.
Tottenham have won their last three league games to close the gap on Chelsea, but injuries to Harry Kane and Son Heung-min have left Mourinho without a senior striker.
Lucas Moura, Steven Bergwijn and Dele Alli are Mourinho’s alternative options and Belgian defender Toby Alderweireld is convinced Tottenham can cope.
“People have to take responsibility about that,” he said. “I think we have to solve this as a team.
“We have people with different qualities upfront now. We have to keep the belief that people will step up for making goals.”
Arsenal and Everton, who meet in north London, are further behind in the race, but the possibility of Manchester City losing their appeal against a two-year Champions League ban means a fifth place finish could be enough to reach Europe’s elite club competition.
Everton sit four points behind Tottenham after a five-game unbeaten run featuring successive wins over Watford and Crystal Palace.
Carlo Ancelotti has masterminded Everton’s revival since taking over from the sacked Marco Silva, but he has yet to secure a statement win over one of the league’s bigger clubs.
Beating Arsenal on their own turf would qualify as a significant moment for Ancelotti’s side, especially as the Gunners looked in good form in their 4-0 thrashing of Newcastle last weekend.
Arsenal are unbeaten in their last six league games and lie two points adrift of Everton, with Manchester United, Sheffield United and Wolves also in the mix.
Manchester City play their second game since the shock European ban when they travel to third placed Leicester, a game that will play second fiddle to next week’s Champions League tie against Real Madrid for Pep Guardiola’s side.
Liverpool’s staggering 22-point lead over City has turned the title race into a procession and Monday’s visit from struggling West Ham offers an ideal chance to bounce back from a 1-0 Champions League last 16 first leg defeat at Atletico Madrid.
Jurgen Klopp’s team have dropped just two points all season and are on a run of 17 consecutive league wins.
They need just five more wins from their remaining 12 games to take the title for the first time since 1990.