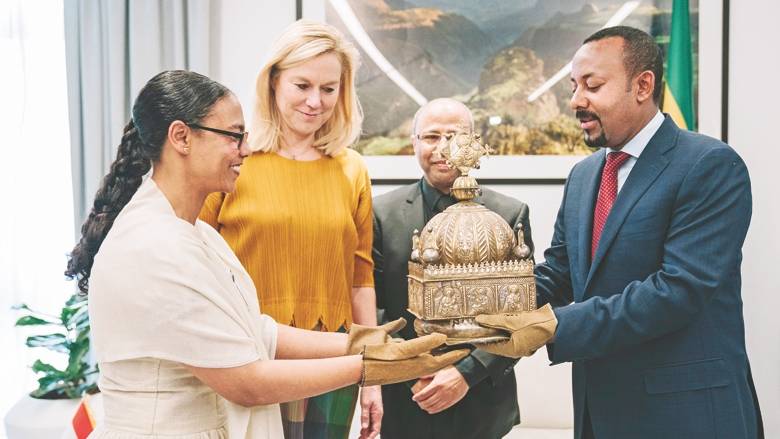 The handover took place at a ceremony in the capital, Addis Ababa.

Ethiopia’s government on Thursday assumed custody of a priceless 18th-century crown that a former refugee had kept hidden in his apartment in the Netherlands for two decades.

The handover took place at a ceremony in the capital, Addis Ababa, attended by Prime Minister Abiy Ahmed and Sigrid Kaag, the Dutch minister for foreign trade and development cooperation. Sirak Asfaw, the one-time refugee who is now a Dutch citizen, fled Ethiopia during the late 1970s during the so-called “Red Terror” purges.

He found the gilded crown in 1998 in a suitcase left behind by a visitor. It had “disappeared” from the Holy Trinity Church in Cheleqot, a village in northern Ethiopia, the Dutch government said in a statement on Thursday.

Sirak assumed the crown had been stolen but worried it would “just disappear again” if he returned it to Ethiopia’s leaders, so he kept it in his apartment in the Dutch port city of Rotterdam, he said last year.

Only after Prime Minister Abiy Ahmed took office in 2018 did Sirak feel comfortable handing it over. He then contacted Arthur Brand, a renowned Dutch art detective, who brought the story to the Dutch government’s attention. “We’re honoured and delighted to have been able to facilitate the rightful return,” Kaag, the Dutch minister, said in a statement on Thursday.