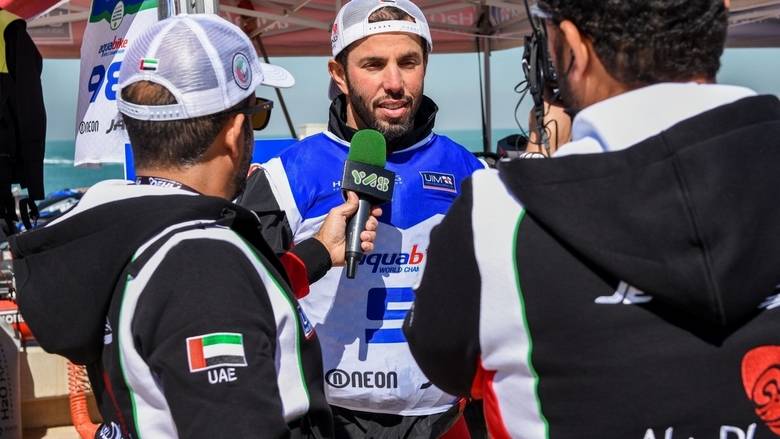 Team Abu Dhabi’s Rashed Al Tayer was denied back-to-back victories in the Grand Prix of Kuwait today by another dramatic twist in the opening round of the 2020 UIM-ABP Aquabike World Championship.
The Emirati rider, who won the previous day’s first Runabout GP1 moto from pole position, made another superb start to moto two and held a comfortable lead from Kuwait’s Yousef Al Abdulrazzaq before being halted by mechanical problems on the eighth of 18 laps.
Four-time world champion Abdulrazzaq went on to win by 28.81 seconds from last year’s championship runner up, Denmark’s Marcus Jorgensen, with reigning world champion Jeremy Perez of France in third.
Team Abu Dhabi were celebrating later, however, when reigning world freestyle champion Rashid Al-Mulla added victory in moto 2 to his success the previous day to clinch his 11th consecutive Grand Prix success.
Al Tayer had been looking to clinch the opening Grand Prix of the season as he did in Portugal last year, and despite today’s setback looks capable of mounting a serious Runabout GP1 title challenge.
It may be some time before Team Abu Dhabi’s Salman Al Awadhi can do the same in Ski GP1.  But the 18-year-old underlined his undoubted talent by producing his best finish to date as he took second place in moto 3 behind Victory Team’s defending champion Kevin Reiterer.
Shaken by her finish line collision with fellow-Swede Jonna Borgstrom 24 hours earlier, Team Abu Dhabi’s Emma-Nellie Ortendahl bounced back to take second place in the third Ski Ladies GP1 moto behind France’s Jessica Chavanne, the overall Grand Prix winner.
“I have some bruises and am still a little sore, but we managed to keep it together after some technical issues here,” said three-times world champion Ortendahl, making her team debut.