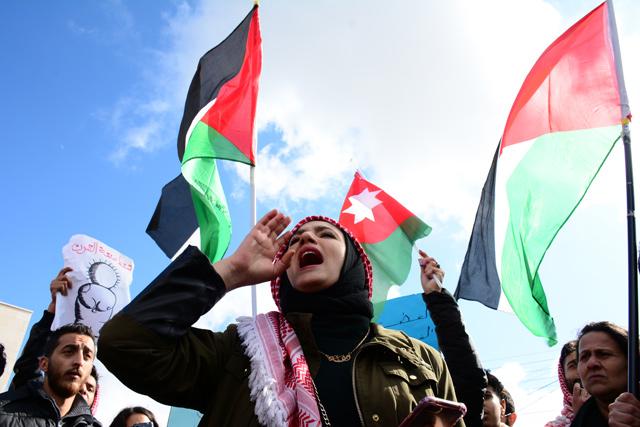 Political, partisan and professional associations as well as popular movements on Friday organised protests nationwide to voice rejection of the US peace plan known as the “Deal of the Century”.

Participants in the protests, which started after Friday prayer, raised Jordan’s flag and expressed dismay over US President Donald Trump’s plan, which “shows bias towards the Israeli occupation and causes Washington to lose its role as mediator and supporter of peace in the region”, the Jordan News Agency, Petra, reported.

Protesters also stressed the Arab identity of Jerusalem and their adherence to the concept that the holy city is the eternal capital of the state of Palestine.

They praised the positions of His Majesty King Abdullah, the Custodian of Islamic and Christian holy sites in Jerusalem and his commitment to international legitimacy resolutions to solve the Palestinian-Israeli conflict according to the two-state solution.

Amman witnessed two sit-ins, including one organised near the US embassy, where participants expressed rejection of the peace plan, noting that it is a new episode in a series that aims to undermine the Palestinian issue.

Similar sit-ins and protests were organised in Irbid, Jerash, Ajloun, Karak, Salt, Zarqa’s Russeifa district, Aqaba, Madaba and Tafileh, where participants reiterated Jordan’s official position on the issue and the legitimate right of the Palestinian people to establish an independent state on their national soil, with East Jerusalem as its capital.

They also called on Arab and Islamic worlds to support His Majesty’s courageous and strong stances in rejection of such plans “no matter what the pressures and temptations are”.

Protestors stressed that the US peace plan represents a clear violation of all international legitimacy resolutions and all human rights principles mentioned in international agreements.