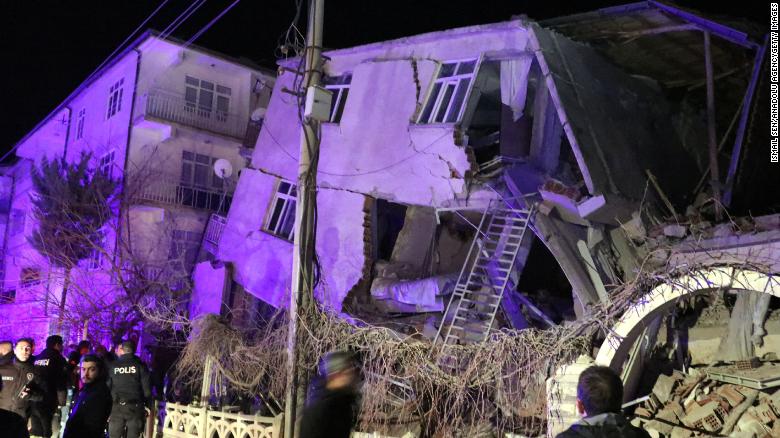 ‘Everybody is in the street, it was very powerful, very scary’

Istanbul: The death toll from a strong earthquake that rocked eastern Turkey climbed to 21 Saturday, with more than 1,000 people injured, emergency officials said.

Rescue workers were continuing to search for some 30 people buried under the rubble of collapsed buildings in Elazig province and neighboring Malatya, said Health Minister Fahrettin Koca. He warned that the death toll could rise.

Emergency workers and security forces distributed tents, beds and blankets as overnight temperatures dropped below freezing in the affected areas.

Mosques, schools, sports halls and student dormitories were opened for hundreds who left their homes after the quake.

A powerful earthquake has killed at least 20 people and injured more than 1,000 in eastern Turkey, as rescue teams searched through the rubble of collapsed buildings for survivors on Saturday.

At least 30 people were missing following the magnitude 6.8 quake on Friday night, which had its epicentre in the small lakeside town of Sivrice in the eastern province of Elazig.

“It was very scary, furniture fell on top of us. We rushed outside,” 47-year-old Melahat Can, who lives in the provincial capital of Elazig, told AFP.

President Recep Tayyip Erdogan said all steps were being taken to aid people affected by the quake, which caused widespread fear.

“We stand by our people,” Erdogan said on Twitter.

The Turkish government’s disaster and emergency management agency (AFAD) said the quake hit Sivrice at around 8.55 pm (1755 GMT). Turkey lies on major faultlines and is prone to frequent earthquakes.

The quake shook the Sivrice district in the eastern province of Elazig at around 8.55 pm (1755 GMT), the government’s disaster and emergency management agency said.

The US Geological Survey assessed the quake’s magnitude at 6.7, and said it struck at a depth of 10 kilometres (about six miles).

“It was very scary, furniture fell on top of us. We rushed outside,” 47-year-old Melahat Can, who lives in the city of Elazig, told AFP.

“We will spend the coming days in a farmhouse outside the city,” she said.

“We are hoping we will not have more casualties,” he was quoted as saying by the official Anadolu news agency.

‘Everybody is in the street’

“Sivrice was shaken very seriously, we have directed our rescue teams to the region,” he told reporters, adding that there were reports of some collapsed buildings in the region.

The tremor was felt in several parts of eastern Turkey including Tunceli, the Turkish broadcaster NTV reported, adding that neighbouring cities had mobilised rescue teams for the quake area.

“We have sent four teams to the quake region,” Recep Salci of Turkey’s Search and Rescue Association (AKUT) told AFP. “We have news of collapsed buildings, and preparing more teams in case of need.”

Zekeriya Gunes, 68, a resident of Elazig city, said a building 200 metres down on his street had collapsed but he did not know whether it was inhabited.

“Everybody is in the street, it was very powerful, very scary,” he said.

State media in neighbouring Syria and Iran both reported the earthquake was felt in those countries. Local media in Lebanon said the cities of Beirut and Tripoli also felt the quake.

Turkey lies on major faultlines and is prone to earthquakes.

In 1999, a devastating 7.4 magnitude earthquake hit Izmit in western Turkey, leaving more than 17,000 people dead including about 1,000 in the economic capital Istanbul.