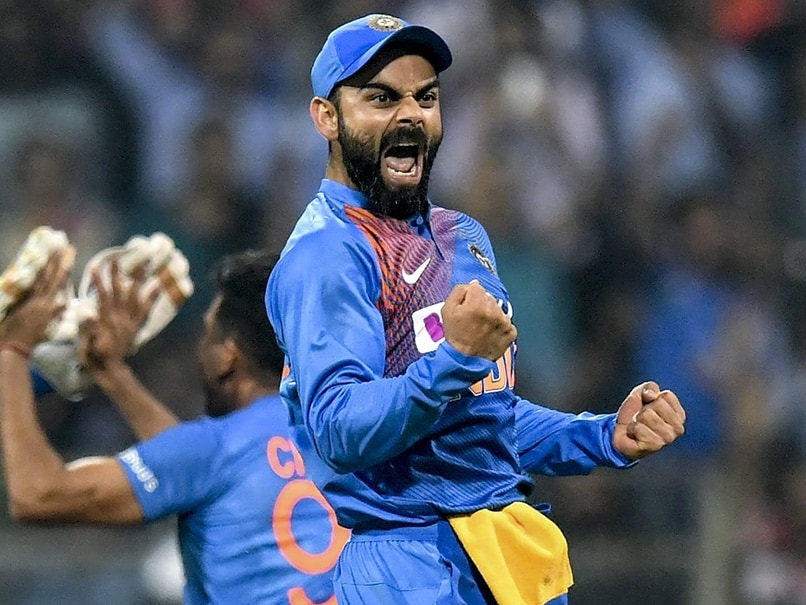 Skipper Virat Kohli on Friday hailed India’s clinical start to the year after they completed a 78-run, series-clinching win over Sri Lanka in the third Twenty20 international.
Openers KL Rahul, who top-scored with 54, and Shikhar Dhawan, who hit 52, put on 97 for the opening wicket as India amassed 201 for six after being put in to bat in Pune.
Paceman Navdeep Saini claimed three wickets to help dismiss Sri Lanka for 123 in 15.5 overs despite a fighting 57 by Dhananjaya de Silva.
Saini sent back De Silva after his 36-ball knock and then got skipper Lasith Malinga for nought as the islanders lost their second straight match after the opening T20 was abandoned due to rain.
Shardul Thakur also played a key part after hitting 22 off eight balls while batting down the order and then taking two wickets with his medium-pace bowling.
“Good start to this year. We have started on the right track, chasing one game and setting one game. Two very clinical performances, so I’m very happy,” said Kohli.
“Just the confidence of getting that 200 mark every now and then will put us in a good stead. That middle collapse was challenging and what Manish (Pandey) and Shardul did was very good.”
Manish Pandey, scoring 31 off 18 balls, and Thakur, who was named man of the match, put on an unbeaten 37-run stand for the seventh wicket and the duo managed to get 19 runs off the last over.
Earlier the left-handed Dhawan was dropped on one by Dasun Shanaka at deep square leg off Angelo Mathews and made the most of the spill as he recorded his 10th T20 fifty in just 34 balls.
Left-arm wrist spinner Lakshan Sandakan finally got Dhawan and struck twice in his next over to send back Rahul and Shreyas Iyer, for four, trudging back to the pavilion as India slipped to 122-4.
“We bowled okay for these kind of conditions in the first 15-16 overs, and after that they got away,” said Malinga.
“We didn’t have much time to change our squad but this is the talent we have in Sri Lanka so we have to back them. Everyone in world cricket is using wrist spinners because they are wicket-taking options and we have Sandakan and (Wanindu) Hasaranga.”
Kohli, who dropped himself to number six in the batting order, took the attack to the opposition with a 17-ball 26 before being run out while attempting a second run.
Sri Lanka were never in the chase after losing their top three batsmen for 15 runs and then slipping to 26 for four.
De Silva and Mathews, who made 31, put on 68 for the fifth wicket to raise Sri Lankan hopes but Washington Sundar struck back to break the partnership.
Pace spearhead Jasprit Bumrah became India’s highest wicket-taker in the T20 format with 53 scalps after he struck first with the wicket of Danushka Gunathilka for one.
India now host Australia for three one-day internationals starting Tuesday in Mumbai.