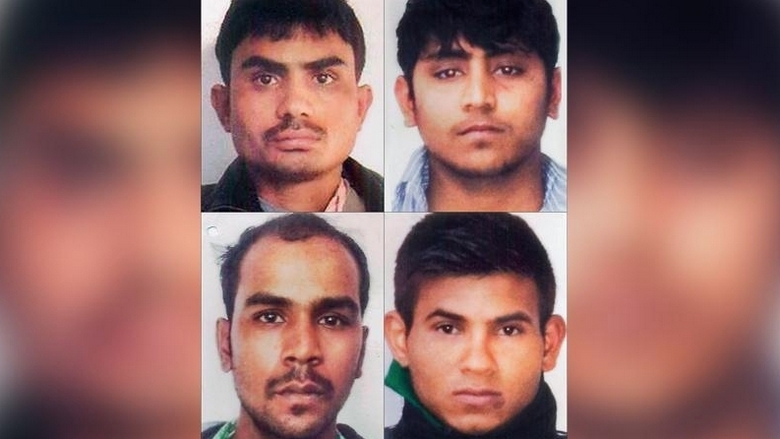 The quality of the rope, the weight of the prisoner, the distance of the drop are all considered.

Four rapists, who were on Tuesday issued a black warrant by a Delhi court for brutally raping and murdering a 23-year-old physiotherapy student, are expected to be hanged according to directives prescribed under the Delhi Prison Rules, 2018.

Since the death sentence was awarded to the convicts named Pawan, Akshay, Vinay and Mukesh years ago, the issuance of black warrant or death warrant by the court merely confirmed the date and time of their hanging.

The case pertains to the gang-rape of a woman by six persons on a moving bus in the national capital on the night of December 16, 2012. The victim, who was later given the name Nirbhaya, died at a hospital in Singapore where she had been airlifted for medical treatment.

More than seven years after the horrendous act was committed, the rapists are now scheduled to be executed on January 22 at 7am in New Delhi’s Tihar jail.

What procedure will the prison authorities follow to hang the rapists?

Firstly, they will be kept in isolation cells until the date of their execution. According to the manual, if desired by the prisoner, jail authorities have to inform their relatives and facilitate their last meeting.

The convict facing the gallows is also allowed to prepare his will.

Days before the execution is slated to be carried out, the Superintendent of the prison will inspect the gallows and the rope which is to be put around their neck for execution.

The official is also entrusted to see if the rope, made of either cotton yarn or manila, is carefully tested.

“As a rule, a dummy or a bag of sand weighing 1 and 1/2 times the weight of the prisoner to be hanged and dropped between 1,830 and 2.440 meters will afford a safe test of the rope,” the rules states.

The rules also go into great detail about the weight of the prisoner and the corresponding height from which he should be hanged.

The extreme limits of 1,830 meters and 2,440 meters are adhered to as per the physical peculiarity of the prisoner. Wax or butter is also applied to soften the ropes.

The rope for the execution of Parliament attack case convict Afzal Guru in February 2013 was brought from Bihar’s Buxar jail.

The prison rules also categorically mention that the execution should take place early in the morning before it gets bright.

No other person, especially relatives of the prisoner, should be allowed to witness the execution. The jail authorities may, however, permit social scientists, psychologists, and psychiatrists, etc. to conduct the research there.

On the morning of the execution, the Superintendent has to make sure if any communication is awaiting him regarding the execution. He should then visit the prisoner in his cell and get any document requiring his attestation, such as a will, signed by him.

Next, the hands of the prisoner are pinioned behind the backs after which he is escorted to the scaffold guarded by the head warder and six warders, two walking in front, two behind and two holding arms.

On arrival of the prisoner near the scaffold, the Superintendent confirms his identity to the Magistrate. He then reads the warrant to the prisoner in a language he understands.

A cotton cap, with a flap, is then put on the face just before he is taken to the gallows-enclosures.

The prisoner should not be allowed to see the gallows. According to the manual, after entering the gallows, “the prisoner shall mount the scaffold and be placed directly under the beam to which the rope is attached, the warder still holding him by the arms”.

The executioner then straps the prisoner’s legs tightly together and adjusts the noose around his neck. The Hangman is paid by the government of Delhi for the execution of each prisoner. The person to execute the four convicts in the Nirbhaya rape case is being brought from Uttar Pradesh’s Meerut district.

Subsequently, the Superintendent should make sure that the rope around the neck of the prisoner is adjusted properly and the knot is placed in a proper position.

“The warders holding the prisoner’s arms shall now withdraw and at a signal from the Superintendent, the executioner shall draw the bolt”

The operations should be done simultaneously and as quick as possible. “On completion of all these operations, the Superintendent shall give a signal, on which the executioner in-charge shall push the lever to release the trap-door,” the manual stated.

When the trap-door is opened, the prisoner falls through and dies. After the execution, the body remains suspended for half an hour before being taken down or until the Resident Medical Officer has certified that “the life is extinct”.

The Supreme Court in Shatrughan Chauhan judgment in January 2014 made it mandatory to conduct a post-mortem after the hanging.

It is then disposed of according to the requirement of the religion the deceased belong to.

The body can also be handed over to the relatives if they give an undertaking that they will not make a public demonstration of the cremation of the executed prisoner.

“The body of the executed prisoner shall be taken out of the prisoner with solemnity. A municipal hearse or ambulance shall be used for the transportation of the body to the cremation or burial ground,” the rules state.