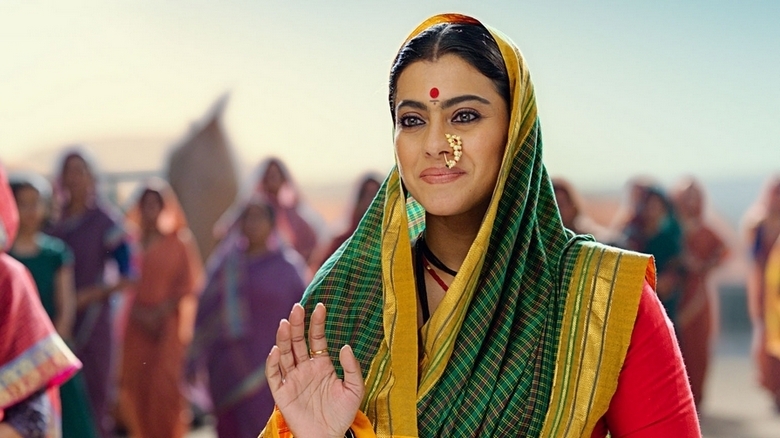 The actress talks to City Times about acting in her first period drama, opposite husband Ajay Devgn

Award-winning actress Kajol, who has more than proved her mettle in Bollywood with a slew of movies like My Name is Khan, Fanaa, Dilwale, Dilwale Dulhania Le Jayenge, and Khabhi Khushi Kahbie Gham, among others is back on the big screen this week. The actress who isn’t seen much on the big screen nowadays, except for selective outings (her last project was the quirky Helicopter Eela in 2018), will this time be partnering with her husband Ajay Devgan in a period drama, Tanhaji: The Unsung Warrior, that releases this weekend in the UAE.
The historical drama that also stars Saif Ali Khan tells the story of real life warrior Tanhaji Malusare of the 17th Century Maratha Empire played by Ajay Devgn. His real life wife Kajol plays his reel wife. When asked about reuniting with her husband on the big screen after a decade, Kajol was all praise for Ajay. “He has matured wonderfully over the years as an actor and you can see that maturity in each and every performance and film that he does. This is his 100th film and that’s a huge achievement and it shows in Tanhaji. Even when he’s working with me he has half a director’s mind and half an actor’s mind. When he’s doing a scene with me sometimes he’ll say, ‘Let’s do one more shot, I think you could have been better, you can do this differently, you can change this around.’ So I really appreciate that about him as an actor,” Kajol shared when City Times caught up with the actress over the phone last week.
The actress has never shied away from playing bold avatars and Tanhaji being her first period film, is no different. She plays a strong woman named Savitribai Malusare who stands for power, strength and loyalty.
Kajol says has always been very selective with the movies she takes on, but what she needs above all else in a new project is a good script.
Excerpts from our conversation with the actress.

Tell us a bit about the role you play in Tanhaji.
I play Tanhaji’s wife. Her name is Savitribai Malusare. She’s an amazing character. When people go off to war, I think the people who let them go off with a smile have an amazing amount of strength to be able to do that. Also, what she stands for and who she is, is very necessary in the film. She knows that’s she’s a wife, a mother, and Tanhaji’s biggest strength and she knows how much her take means to him. I think that in itself makes her a very unique character.

What was the most challenging part about portraying Savitribai?
I think the fact that you’re in a different time is in itself a challenge. And it’s definitely something I’ve never done before. To play a character from a different time who relies on much less than we do today, it would take me really long to get ready because the sari is not the most easiest thing to drape and nobody knows how to drape an old fashioned nauvari sari anymore. So we found this 75 year old woman who’s been draping only nauvari saris for the last 50 years. She used to come every morning after travelling an hour and half just to drape my saris. It would take me two and a half hours every day to get into the look!

This is the first time you’re part of a historical drama. What attracted you towards Tanhaji?
Tanhaji is a character that I was actually aware of. The normal person may not know about him. There’s hardly a paragraph about him in our history books. I may not have read or studied about him, but I live in Maharashtra and I have so many relatives from this state who used to tell me stories. So I do know quite a bit about Tanhaji and so I was very excited that we were doing this film. And everything just ended up in a happy coincidence.

The movie tells the story of the unsung warrior Tanhaji. How accurate is the film to the historical tale?
I think we have tried to remain true to history as much as possible. But history is not going to tell you who said what. So you have to imagine that this is what would have happened, or these people would have said this during that time. So I think that way we made the script work and fit together as much as we can.

What relevance do historical period dramas have in today’s time?
I think it’s important. Tanhaji is about unsung warriors; it is something we want to talk about and start making more movies about. Tanhaji is a character who fought for the country and somewhere down the line our kids need to understand so that they can value the sacrifices everybody before us has made.

Do you think there’s an audience today for historical dramas?
I definitely think so! No two ways about it. We’ve worked very hard on it and proud to say that. The technology we’ve used for Tanhaji is something that’s never been done before. It’s going to be an experience and a visual delight. You’re going to feel like you’ve become part of that world. The whole film will blow you away!

Over the past few years you’ve been very selective about the roles you take on;  so what are you looking for now days?
It’s not only in the past couple of years I’ve been careful about selecting my movies but in fact for however long I’ve been working. I think the criteria is pretty much the same; I want something interesting, something I haven’t done before but first and foremost my number one criteria is that I have to have a good script. That is my priority. I can make a good character out of a good script but I cannot make a good script out of a good character.

So what’s next? Can you tell us anything about any upcoming projects?
I just finished a Netflix film called Tribhanga which will be releasing at the end of 2020. I’m talking to a few people but nothing concrete I can announce right now.