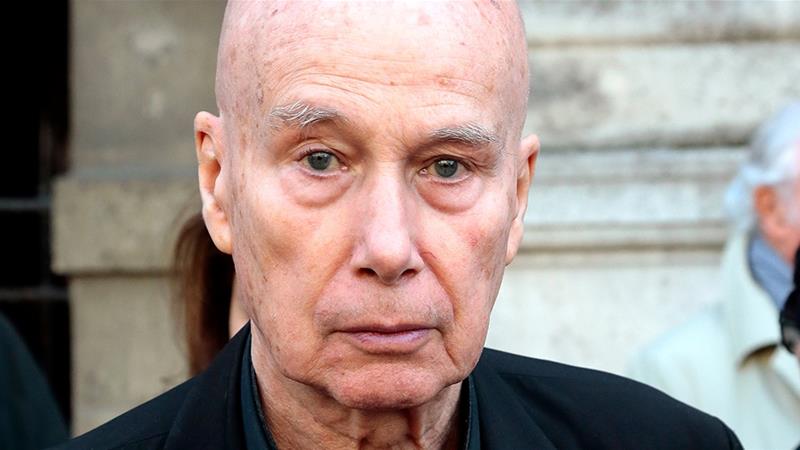 Essayist Gabriel Matzneff is being investigated by French police for allegedly raping a 14-year-old girl.

France‘s culture minister said Monday that a writer accused of raping and seducing children should be stripped of a special state pension.

Award-winning essayist Gabriel Matzneff is being investigated by French police after the publication of a book detailing his sexual relationship with a girl of 14 over three decades ago.

Underage relationships have featured in Matzneff’s writing, and in 1977 he published a piece in Le Monde newspaper supporting three people convicted of raping teenagers.

In a 1990 television talk show, Matzneff, 83, talked about his sexual exploits with girls.

Despite his views, he was named by the Culture Ministry as an “officer of the arts and letters” in 1995 and he won the prestigious literary award, the Renaudot Essai, in 2013.

Franck Riester, current culture minister, said Matzneff should be deprived of cash from a hardship fund from the National Books Centre (CNL) for elderly writers in financial straits.

In a statement, he said the author should not be granted the annual allowance if he applies for it again.

The case has highlighted what many see as an overly permissive attitude towards sexual harassment and assaults in France.

The French film establishment has been rocked by rape accusations against directors Roman Polanski and Luc Besson, while star Adele Haenel said she was sexually harassed by the director of her first film when she was 12.

All three men have denied the claims.

The head of the CNL, Vincent Monade, said the organisation had resisted Matzneff being awarded the allowance when he first applied for it, but bowed to the request under pressure from politicians and other famous authors who lobbied for him.

He said they had recommended to the minister that the grant now be withdrawn.

Police opened a formal investigation into Matzneff last week after leading publisher Vanessa Springora described her tortured relationship with the writer in a book called, Consent.

In it, she describes how Matzneff, then in his fifties, would wait for her outside her school and then take her back to his home for sex.

Prosecutors said their inquiry would focus on “rapes committed against a minor” aged under 15.

Matzneff has denied any wrongdoing and said there had been an “exceptional love” between him and Springora.