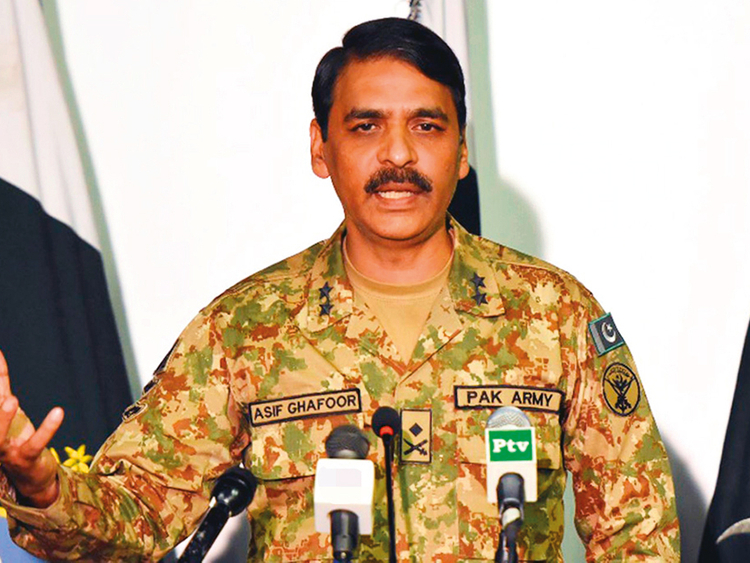 Pakistan will not be party of any move that disturbs the peace in the region and will not take sides in the US-Iran conflict, said the Pakistan Armed Forces spokesperson on Sunday.

Commenting over the recent developments in the Middle East, Major General Asif Ghafoor, Director General Inter-Services Public Relations (ISPR), told a leading Pakistani television channel ‘ARY News’ that Pakistan desires regional peace but at the same time, it would not compromise on its national security.

He also debunked social media reports that Pakistan would stand by US in a war against Iran. Maj General Ghafoor said such baseless rumours were circulating on social media. “My request to the people and media would be to only pay attention to statements from an authentic source,” he said, adding that they should not believe in the propaganda and rumours being spread by the enemies of the country,” he added.

He said that the regional scenario has changed after the killing of Iranian Commander General Qasem Soleimani and Pakistan’s Foreign Office (FO) had already given its statement over the incident. Gen Soleimani was killed on Friday morning in a US strike on Baghdad’s international airport, in a dramatic escalation of tensions between the two countries.

“In this scenario, Prime Minister [Imran Khan] and the Army Chief [General Qamar Javed Bajwa] has adopted a very clear stance that Pakistan will not allow its soil to be used against anyone and play its strong role for regional peace,” he clarified.

DG ISPR said that the US Secretary of State Mike Pompeo had held telephonic discussions with the Pakistan Chief of Army Staff (COAS) on two points on January 3.

Ghafoor said COAS had urged for de-escalating tensions between the countries in the region. COAS Bajwa had also urged to avoid such actions which led the region to another war, added the DG-ISPR.

“Army Chief had also told him (Pompeo) to avoid such steps which could interrupt the Afghanistan reconciliation process. COAS has an important role in bringing improvements to the regional situation and Pakistan achieves peace targets after rendering many sacrifices.”

He clarified the US government talked to Pakistan for the resumption of the military training programme, which has been suspended for the last four to five months.

DG ISPR added that it is the part of propaganda against Pakistan, the linking of ongoing talks with the recent developments in the Middle East. He reiterated the country would not be part of any process that destroys regional peace, reported Dawn.

“Pakistan will support all peaceful efforts and hopes the region doesn’t go towards another war,” he quoted the army chief as saying.

The Pakistan Foreign Office in a statement had also expressed deep concern over the tensions, urging all sides to exercise restraint.

“Meanwhile, Pakistan’s provincial government in Sindh on Saturday issued a threat alert amid heightened tensions between United States (US) and Iran, following the assassination of top Iranian general Qasem Soleimani in Baghdad.

In a letter titled, “Enhancement of Security of American and Iranian Establishment/Installations” in the province, the Sindh Home Department requested the Director General Sindh Rangers, Inspector General Sindh and all the commissioners to increase the security citing tense situation in the region.

“I am directed to … request for enhanced security arrangements for the Iranian and US Nationals and establishments in the current security scenario in order to avoid any untoward incident,” read the letter issued by the additional secretary,” the letter reads.

Protesters, including women and children, have gathered in Karachi and Islamabad for an anti-America rally in the wake of the killing of Iran’s Maj Gen Qasem Soleimani in a US drone strike on Friday.

Also, a large number of Shia Muslim community members in Karachi took out a rally on Sunday condemning the killing of Iranian Commander, according to Dawn news.

During the rally that began at about 3pm in Karachi at the Fawwara Chowk, protesters were carrying portraits of Soleimani and chanting slogans of “Down With USA!”