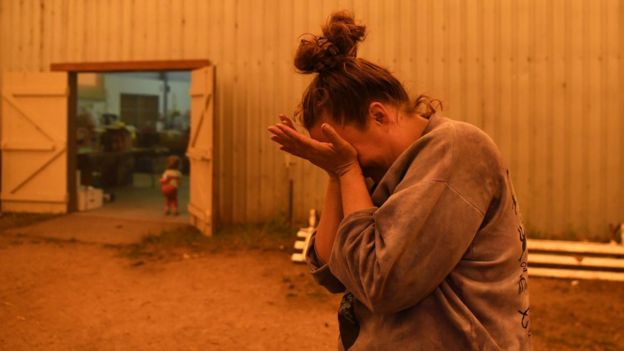 Australian Prime Minister Scott Morrison has warned that the devastating bushfires raging in the country might go on for months.

At least 24 people have died since the fires began in September. Air quality in the capital Canberra was this weekend rated the worst in the world.

Mr Morrison announced the creation of a recovery agency to help those who have lost homes and businesses in the fires.

He has faced fierce criticism over the speed of his response to the crisis.

The weekend saw some of the worst days of the crisis so far, with hundreds more properties destroyed. Rural towns and major cities saw red skies, falling ash and smoke that clogged the air.

Conditions eased in Victoria and New South Wales on Sunday after temperatures and wind speeds dropped and some light rain fell. But authorities warned that the danger was far from over.

“We’re in uncharted territory,” said the New South Wales premier, Gladys Berejiklian. “We can’t pretend that this is something that we have experienced before. It’s not.”

John Steele, 73, who was evacuated with his wife from their rural property north of Eden late on Saturday, told the AFP news agency: “Visibility was down to about 50 metres, if that, and we had lots of debris falling out of the sky and a lot of white ash.

“The sky is still red. We’re not out of the woods yet.”

Mr Morrison, who cancelled a planned visit to India because of the crisis, faced further condemnation on Sunday, after the head of the NSW Rural Fire Service revealed the service had only learned of the plan to call up reserve troops through the media.

In an indication of the long road ahead, Mr Morrison warned that the fires might burn for many months, and said that the newly-created recovery agency would run for at least two years. The body will help bushfire-hit communities recover, media reports said, through work ranging from rebuilding infrastructure to providing mental health support.

Queen Elizabeth on Sunday said she was “deeply saddened” by the fires, and thanked the emergency services “who put their own lives in danger” to help communities.

A fundraiser for fire services launched by the Australian comedian Celeste Barber on Friday raised more than A$20 million (£10.6m; $13m) in just 48 hours

“Please help any way you can. This is terrifying,” Ms Celeste wrote in a Facebook appeal.

She called the rush of donations “incredible”, and said the proceeds would go to NSW Rural Fire Service – a government-funded agency staffed by volunteers – and the Brigades Donations Fund, which channels charitable donations directly to fire brigades.

Members of the comedian’s family were evacuated from the town of Eden in New South Wales, where officials told residents to leave immediately and head north if they did not have a bushfire response plan.

A number of celebrities have also donated money to support the firefighting effort in recent days – among them the US singer Pink and Oscar-winner Nicole Kidman, who pledged $500,000. “Our family’s support, thoughts and prayers are with everyone affected by the fires all over Australia,” she wrote on Instagram.

News of the donations was praised by Australians on social media, but some lamented that private citizens were raising funds they said should have been put in place by the government.

Nearly 200 fires are still burning across the country, with every state and territory affected. More than 1,200 homes have been destroyed and millions of hectares of land scorched.

Tens of thousands of homes in NSW were left without power and thousands of people have been evacuated from coastal towns over the past week. The town of Cooma suffered a further blow on Saturday night when a large tower carrying millions of litres of water exploded, flooding homes and sweeping away vehicles.