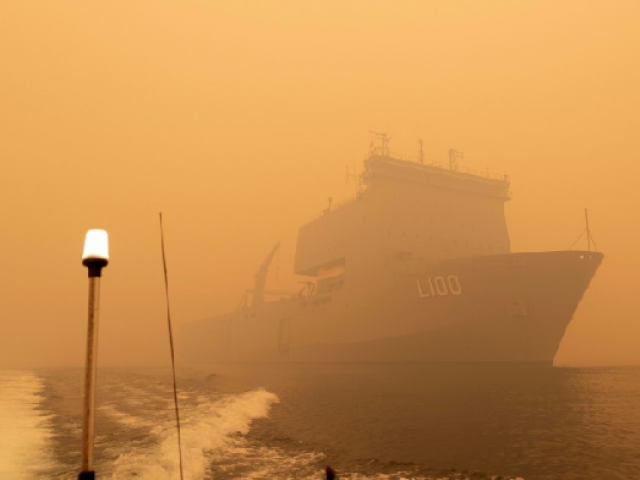 One driver told AFP it had taken her three hours to travel just 50 kilometres (30 miles).

SYDNEY: The Australian military has begun the seaborne evacuation of hundreds of people trapped in a fire-ringed southeastern town, as the country braced for more catastrophic conditions.

A navy landing craft from the HMAS Choules docked in the town of Mallacoota, where residents trapped on the foreshore since New Year’s Eve clambered aboard with family, pets and a few belongings.

Military aircraft have also been working with emergency crews to drop relief supplies into isolated areas.

At least 20 people have died, dozens are missing, and almost 500 homes have been destroyed, in a months-long bushfire crisis that has torched an area roughly double the size of Belgium.

But with temperatures expected to rise above 40 degrees Celsius (104 Fahrenheit) again on Saturday, a state of emergency has been declared across much of Australia’s heavily populated south-east.

Thousands of residents and tourists have been heeding warnings to flee a popular 300 kilometre (190 mile)-length of coastline, with queues of cars stretching toward Sydney and Canberra.

One driver told reporters it had taken her three hours to travel just 50 kilometres (30 miles).

New South Wales Transport Minister Andrew Constance called it the “largest evacuation of people out of the region ever.”

John Steele, 73, who lives outside the south coast town of Merimbula, told journalists some people were “panicking” amid the warnings to evacuate.