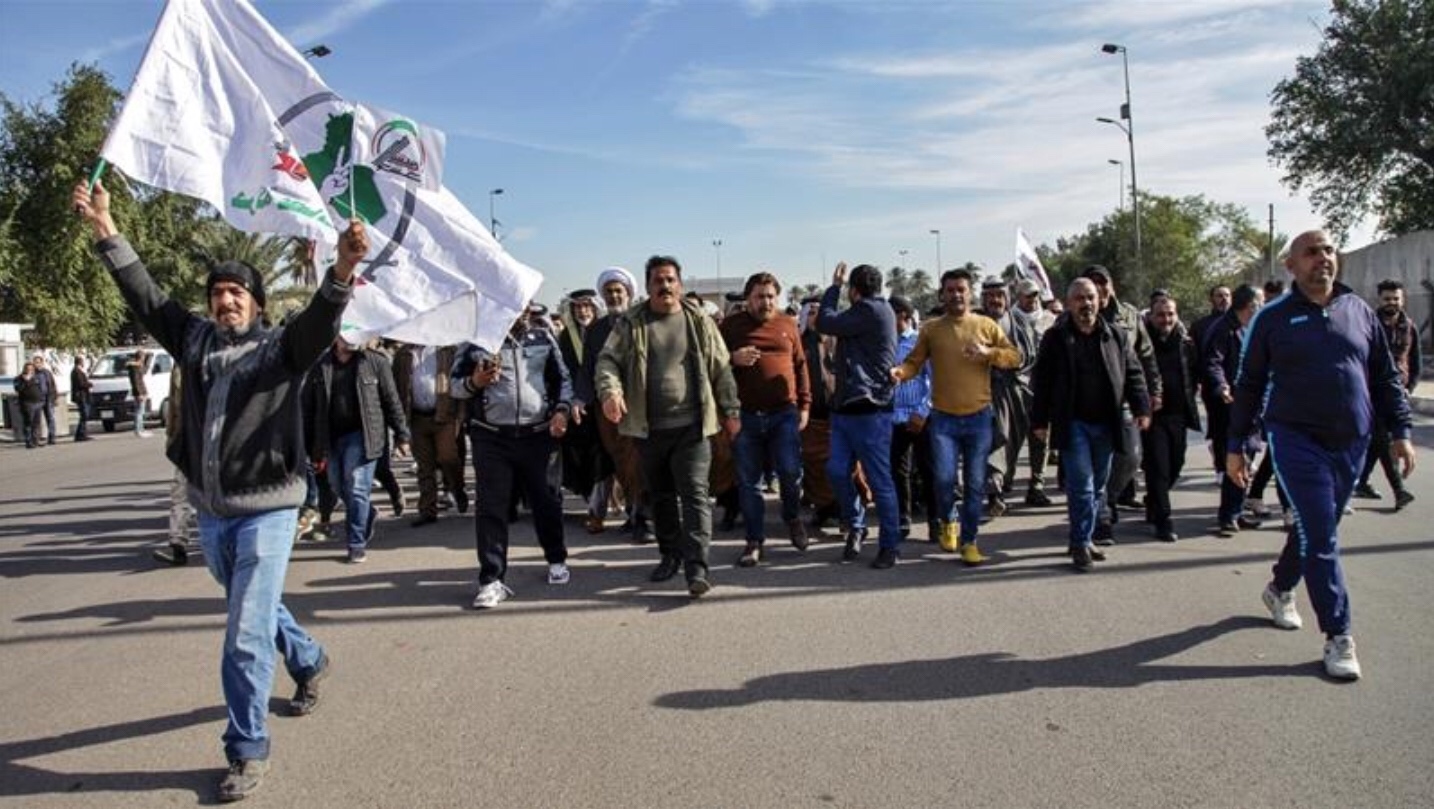 PMF members and supporters continue sit-in near US embassy in Iraq, as US-Iran tensions escalate.

Hundreds of Iraqi members of the Popular Mobilisation Forces (PMF) and their supporters hurled stones at the United States Embassy in Baghdad for a second day on Wednesday, while security forces fired tear gas and stun grenades in a bid to drive them away.

US troops also fired tear gas to disperse the protests, led by the Iranian-backed PMF – an umbrella grouping of paramilitary organisations that mostly consists of Iranian-backed Shia militias and that was integrated into Iraq’s armed forces.

They were gathered outside the US Embassy compound in Baghdad for a second consecutive day. Dozens had camped out at the gates of the embassy where they stayed the night.

The protesters lit a fire on the roof of the reception area on Wednesday, as smoke rose from the building. Protesters also firebombed a second gate, setting another fire.

Meanwhile, US soldiers were seen on the roof of the main embassy building, as Washington said it was deploying 750 additional troops to the region.

The protests mark a new turn in the tensions between Washington and Tehran playing out across the Middle East.

US President Donald Trump, who faces re-election in 2020, on Tuesday threatened to retaliate against Iran but said later he did not want to go to war.

The protests also cast uncertainty over the continued presence of US troops in Iraq.

Crowds had rallied on Tuesday to protest against deadly US air strikes on armed group Kataib Hezbollah bases in Iraq and Syria, setting fires, throwing rocks and smashing surveillance cameras. They did not breach the huge embassy’s main compound, however.

Overnight, demonstrators pitched tents and camped outside the embassy walls.

Reporters from Baghdad, said the security presence near the checkpoint leading to the embassy was significantly higher on Wednesday morning compared to the previous days.

“The people are actually manning the checkpoints and controlling the crowds, but the fighters and supporters of the PMF are being allowed to pass through,” Foltyn said.

“We’re watching people … they’re bringing supplies, we’ve seen gas canisters [being taken] to the people camping out here, to basically resupply them and it very much looks like the hundreds of PMF supporters … are determined to stay,” she said.

Iraqi security forces have made no effort to stop the protesters Tuesday as they marched to the heavily fortified Green Zone after a funeral for those killed in the US airstrikes, nor did they intervene Wednesday as the protest resumed.

Trump accused Iran a day earlier of orchestrating the violence at the US Embassy and said Tehran would be held responsible. Iran rejected the

Reporters from Tehran, said for the first time, Iran’s Supreme Leader Ayatollah Ali Khamenei responded by saying that “the US cannot do a damn thing”

“He made a reference to the US president by saying that guy has tweeted that we see Iran responsible for the events in Baghdad, and we will respond to them,” Jabbari said, referring to Khamenei’s Twitter post.

“The Supreme leader also said that if the Islamic Republic decides to challenge and fight it will do so unequivocally and that the Iranians are not after wars … They will strongly defend the Iranian nation’s interests, dignity, and glory.”

Zeidoon Alkinani, researcher on identity politics in Iraq, said Iran is trying to pull attention away from the anti-government protest movement in Iraq that began in early October. Demonstrators demanding an overhaul to the country’s political system, installed after the US invasion, have continued to take the streets for three months.

“This is one if the very few tactics that Iran is using to denounce and minimise the influence of the protest movement … which heavily created a very strong and prominent anti-Iran sentiment,” Alkinani told Journalists .

Both Iran and the US do not want the protest movement to succeed in Iraq, because the Iraqi government has a “dual partnership between the US and Iran”, Alkinani said.

Senior Iraqi army officers had negotiated with those gathered outside the embassy in an attempt to convince them to leave but failed to do so. Washington is putting pressure on Iraqi leaders to ensure the security of its staff.

According to Foltyn, high-level PMF leaders are currently in negotiations with the Iraqi government, meaning there might be a deal soon that would lead to the halt of the sit-in.

“The PMF will not leave in a way that will reflect poorly on them, they have to leave out of their own will,” Foltyn noted.

The incident marked a sharp escalation of the proxy conflict between Washington and Tehran – both influential players in Iraq – while mass protests are challenging Iraq’s own political system nearly 17 years after the US invasion that toppled Saddam Hussein.

The protests followed US air strikes on Sunday on bases operated by Kataib Hezbollah, which killed at least 25 fighters and wounded 55.

The strikes were retaliation for the killing of a US civilian contractor in a rocket attack on an Iraqi military base, which Washington blamed on Kataib Hezbollah.

The PMF’s political influence in Iraq has risen in recent years, and their allies dominate the parliament and the government. That has made them the target of mass protests since October that are unrelated to the attack on the embassy.

The anti-government protesters have attacked Iranian diplomatic missions and the local headquarters of parties affiliated with the militias across southern Iraq. They have also set up a major protest camp in central Baghdad.

For weeks, the anti-government protesters have been trying to enter the Green Zone housing the government and the US Embassy, but have been beaten back by security forces, who killed hundreds of anti-government demonstrators in clashes.